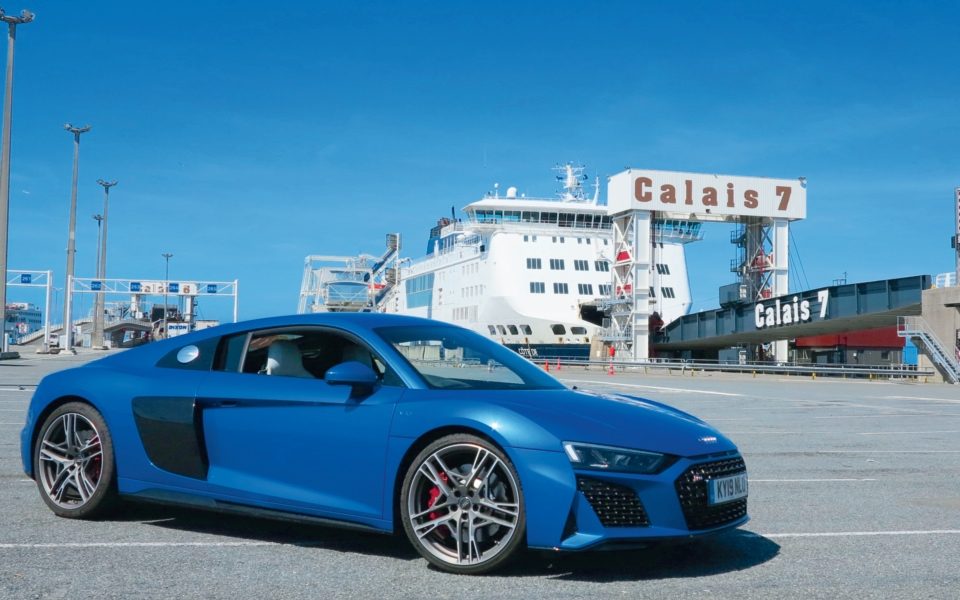 The Audi R8 is a mid-engined supercar with multiple personalities. Ideal, therefore, for a blast through France to visit three characterful but very different hotels.

The 2019 Audi R8 might have only received a mild facelift but it can still stop people in their tracks. From the front, I worry that the recent nip-tuck makes it look too much like the far more pedestrian TT, and that you need to catch sight of the enormous 5.2 litre V10 that’s exposed under glass behind the seats, or the equally gargantuan side air intake which feeds it, to fully appreciate that this is a punk rock performance car, albeit one with a Waitrose loyalty card.

Worry evaporates when I reclaim the R8 upon docking at Calais to find a throng of vacationers making envious and congratulatory overtures. For the true supercar silhouette, one needs to mount the engine in the middle. And what an engine this one is; a naturally-aspirated 562bhp V10 that revs to 8,700rpm. I hit start and, set to Dynamic mode, the exhausts emit a savage bark that echoes down the length of the ferry. I set the sat-nav for Paris, crawl down the ramp and take the A26 autoroute south east.

In Ara Blue, with silvery white nappa seats and red brake callipers pulsing through the spokes of 20-inch forged alloys, my car echoes France’s tricolour flag. My destination is Provence before returning to port, but first I have a night planned in the capital.

At the base of Montmartre, Pigalle has always boasted Paris’ most eye-popping nightlife but in recent years the area, which is home to the Moulin Rouge and a shrinking community of bordels, has undergone a facelift of its own. Many of the seedier joints have become speakeasy cocktail bars. South Pigalle – or SoPi – has gone beyond hipster and is increasingly upscale. The boutique hotel du moment is Le Pigalle, on Rue Frochot, where I’ve chosen to stay.

Le Pigalle stands out thanks to its informal staff, young and fashionable clientele, and retro and contemporary furnishings. Everything feels locally-sourced, from the croissants and late night tapas menu right down to the risqué artwork, edgy photography, 60s bric-a-brac, and ready-mixed bottles of negroni in the mini-bar. Each room has a record player, and vinyl supplied by the “neighbourhood musicologist”.

My collection includes Brigitte Bardot, The Stooges and Roxy Music. The place is curated within an inch of its life, yet it doesn’t take itself too seriously. This may be the sexiest pad in Paris and, as if to underscore that, the maids leave hotel-branded prophylactics on the pillows instead of After Eights.

It is fantastically well located for some of the best cafes (Le Mansart, Le Sans-Souci) and bars in town. Right opposite are two favourites of mine, Lulu White, which dispenses absinth-laced digestives in a 1920s former brothel, and Dirty Dicks, a tiki bar where Hawaiian-shirted mixologists serve burlesque dancers their after-work libations.

One block away, on the Rue de Douai, among the guitar shops (one of the reasons Jarvis Cocker has called Pigalle home is the convenience of music stores and sex shops), is a newcomer to the scene. Below the Italian restaurant Pink Mamma you will find, if you walk through a large fridge door, then through a corridor of meat and another unmarked door, a buzzy speakeasy called No Entry. The negronis here are a step above the mini-bar.

Pigalle stays open till dawn. It’s a late start, therefore, for the route de Soleil; a 470 mile drive down the A6 to Lyon and the A7 to Aix-en-Provence. The R8 is about a centimetre narrower than the ramp for the parking garage, and rear-quarter visibility is poor. That’s about the only uncomfortable thing I’ve experienced with it. On the motorway, in Comfort mode, it hums along mellifluously, maintaining around 23mpg. The styling of the cabin’s dash and the buttons on the transmission tunnel look, to my eye, a bit like a modern American muscle car’s but the ergonomics and materials are exceptional.

Everything is where you expect it to be, which means I quickly feel at home. There may be more exotic badges available for a £128,200 outlay, but the solidity and all-round reliability of this car is superior to pretty much anything else in this lofty segment. Remember, Audi builds 1.8m cars a year, so they know what they’re doing. McLaren builds under 5,000 and, though I’ve always found them to be excellent, people report issues, especially with the electrics.

My Provençal destination couldn’t be more different from swinging Le Pigalle. The Chateau de Fonscolombe is a 300-year-old corn-coloured mansion, Italian Quattrocento in style, set on the edge of the bucolic Luberon. Up until 2017 it was a private estate and the former owner was a renowned botanist, so I recommend taking a suite with a garden view. The grounds include a chapel, a vegetable garden, mossy statues and fountains, a vineyard, and a pond that served as the founding family’s swimming pool.

There’s a stylish and contemporary outdoor pool set away from the house for guests. Inside, it feels like a period film set, and one is encouraged to treat the formal drawing rooms as one’s own, or take a bottle of the estate’s delicious and well-priced organic rosé and sit under the lawn’s cedar trees, one of which was planted by the Queen Mother during a stay in 1965.

Complementing the sense of aristocratic relaxation is the Fonscolombe’s restaurant, which spills onto the terrace so you can dine under the stars. I’m ravenous for fine Provençal cooking, and it doesn’t disappoint. The chef takes local produce and gives it a twist. I start with an heirloom tomato tart with medallions of lobster, served with burrata, raspberries and basil coulis, followed by fleshy and succulent maigre fish with girolle mushrooms and a sabayon of citrusy timut peppers. These dishes are worth the seven-hour drive.

In the morning, I head deep into the Luberon to Gordes, one of the region’s most handsome medieval hilltop towns. Partly I want to see where artists Marc Chagall and Victor Vasarely had discovered such inspiration, but mostly I want to see how the R8 performs on the tight and twisty B-roads between Lourmarin and Bonnieux.

It requires bravery, because there’s a good chance you’ll come around a blind bend, with little protection between rock-face and cliff-edge, to find an ancient 2CV leaning well over onto the wrong wide of the road. The R8’s steering, though, is so sharp that if there’s a gap it can fit through it will find it, and all-wheel-drive keeps the rear planted, so even if you leap off the throttle with the steering locked, as might happen on this ribbon of perilous tarmac, it shouldn’t spin you backwards into the wall. Zero to 62mph takes 3.4 seconds and it keeps pulling all the way to 201mph. The V10 is so urgent that whenever the road opens towards the next corner the Audi is there already.

My favourite view of this car is the rear; stretched wide above its massive tyres, a huge exhaust either side, and mesh below the lights through which you can see some very expensive pipe work. It’s reminds me a lot of the Lamborghini Muciélago’s derriere, but more elegant.

Having indulged in the best Provence has to offer, and got the Audi’s fuel economy down to debaucherous levels, it’s time to return north. This time I will stop 35 miles to the south west of Paris. Le Barn is enticing Parisians out to the sticks, and has been pitched to me as France’s answer to Soho Farmhouse. It’s another long day at the wheel, but the R8 is serene. I stop only for fuel, Red Bull and saucissons to eat on the go.

This car feels like a grand tourer in every way, apart from stowage capacity. Under the bonnet is just 112 litres of suitcase space, due to the front driveshafts. That’s half the space of a Ferrari 488. Behind the seats there is more, but your luggage needs to be thin and soft. Overall, if you want a mid-engined supercar to drive through France for a week and you’ve got a passenger, you’d be better off with the McLaren 570GT with its 370 litres or more accessible baggage space.

The McLaren also feels slightly crisper but less appealing to drive everyday than the R8. If the McLaren feels more spartan, that’s because it’s 200kg lighter than the R8, but you may only feel the benefit of that on the B-roads. On the motorway, it takes far longer to tire of the Audi and, the more hours I spend in the driving seat, the more it beguiles. I had wondered whether, compared to the more expensive, slightly faster McLaren, the Audi might lack soul. But once you appreciate its breadth of talent, it’s quite the opposite. Also, it sounds a million-times better than the forced-induction V8 McLaren.

Set near the Haute Vallée de Chevreuse, Le Barn sits on 500 acres alongside the Haras de la Cense riding school. Horses are a big draw for the guests, be they outdoorsy families or stressed out city types. There is a rambling scatter of buildings, including a 19th century watermill that’s been turned into a spa and a handful of large two and three-storey barns where most of the 71 bedrooms are situated, with balconies overlooking the paddocks and Forêt de Rambouillet. Activities are low-tech and earthy; riding, cycling, fishing, petanque, archery. There are a couple of hot tubs, but no pool. Entering the reception one passes through a corridor of muddy boots.

At Soho Farmhouse, they woodchip all the paths so that no one has to deal with dirt. There is nothing rustic about Soho Farmhouse, it’s a cult in the shires for social climbers. Le Barn is altogether more charmant, with its simple food, schoolhouse furniture, stuffed foxes and flea-market finds.

Over breakfast in the greenhouse I watch, fascinated, as one of Le Barn’s two resident cats tortures a mouse. Forget about the poseurs up in Great Tew and come here to Wes Anderson’s Moonrise Kingdom.

Rather than take to the saddle myself, I go hacking across the Haute Vallée de Chevreuse in the R8. The biggest gripe I have with this car is the tininess of its gear-change paddles. I like to drive with my hands at ten-past-two. If you want to go manual, one needs to slip them to quarter-past-three, and even then Donald Trump would have no hope of reaching them. Audi needs to look at the big chunky paddles on the Ferrari 488 and Porsche 911 GT3, then copy them. With a powerplant as sensational as the R8’s, you really do want full control of it.

With this normally-aspirated V10 Audi has bucked the trend. Enjoy it while it lasts. A hybrid V6 or twin-turbo V8 is sure to follow, which will destroy its character. As it is, the R8’s brilliance stems from its ability to match your mood. It’s got the sex appeal of Le Pigalle, the luxury of La Fonscolombe and the no-nonsense charm of Le Barn. When you put the hammer down, its Sid Vicious, but when you want to chill out it’s Enya. The thrills are on demand, and there’s never any fuss. It’s the dream holiday companion, apart from the lack of luggage space.

• Double rooms at Le Pigalle are from £145: lepigalle.paris

• Room rates at Le Chateau de Fonscolombe start at £165 in low season and £215 in high: fonscolombe.fr/en

• Dover to Calais and Dover to Dunkirk crossings start from £45 each way for a car and up to nine passengers: dfds.co.uk