There are certain things you stop noticing after a few years in London. The first thing is how busy it is; crowds become the norm. The abominable air quality only becomes apparent when you leave. Another thing is Portland Stone. Chances are, you don’t even know you’re looking at it, but there aren’t many streets in the City of London where Portland Stone isn’t visible.

This gleaming white limestone has become synonymous with our capital, plastered across so many of its most famous landmarks it’s almost easier to name the ones it doesn’t feature on. In the City, you’ll find it on the Tower of London, the Bank of England and London Bridge, then the British Museum and Somerset House as you head out west until you reach Buckingham Palace and the Houses of Parliament. And it all comes from a tiny island off the coast of Dorset, fetched out of mines owned by the Crown Estate.

Though limestone has been mined on the island of Portland since Roman times, it began to be shipped to London and used as a construction material in the 14th century. But it really took off thanks to London’s first starchitect Sir Christopher Wren, who chose it as his main material for the reconstruction of St Paul’s Cathedral after the Great Fire of London. Today, his masterpiece stands as a symbol of strength and resistance and has inspired architects all over the world to use Portland Stone, not least for the UN’s headquarters in New York City.

Though Wren’s work is still revered, this extraordinary legacy, and the reason behind the stone’s endurance and continued use, can’t be laid at the door of just one architect. So why has Portland Stone outlasted other materials to become the unofficial building block of London? Michael Poultney thinks its appeal is down to two factors, and he should know: his family’s firm Albion Stone has been selling the stuff since 1927.

“Portland Stone had the advantage that it was easy to work – a mason could carve it quite easily – but it was very resistant to pollution in comparison to other similar stones. That and the mines’ coastal location, so it could be transported up the Thames, was the reason London was built out of Portland Stone and why it’s used across all the important buildings throughout the centuries. Practically every town hall in the UK built during a certain period uses it, then it went across to Belgium and Dublin.”

Its prestigious reputation was set in stone when Sir Edwin Lutyens – who built nearly all the parts of London that Wren didn’t – used Portland Stone for the Cenotaph after the Armistice and then for graves for all British military personnel who died in the First and Second World Wars. Since then, it’s become the stone of the establishment, the stone of the state, irrevocably intertwined with Britain’s architectural identity. 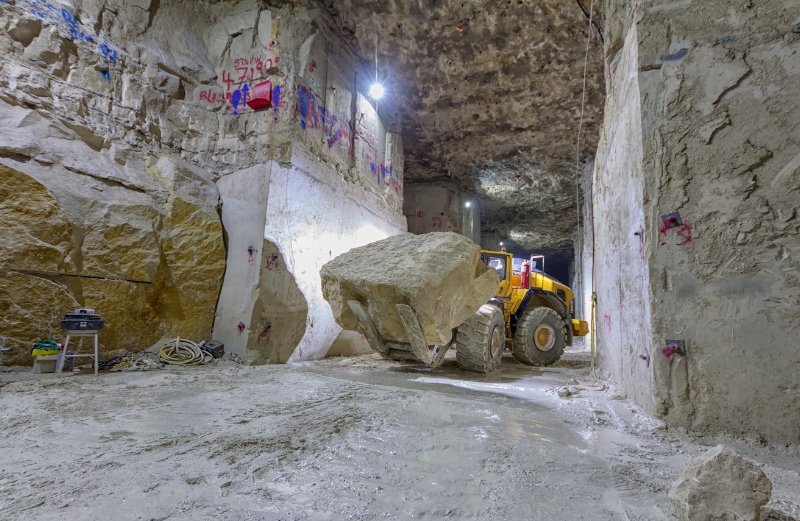 The good stuff being removed from the quarry in Dorset

Though it still isn’t used widely abroad, it’s often used as shorthand for UK design, furnishing Burberry stores all over the world, for example, or in the international work of big firms like Foster + Partners, whose clients want something typically British.

There are three main kinds of Portland Stone; basebed, the smoothest and deepest which is popular for memorials as it’s easy to carve; roach, a textured stone that bears the marks of fossils embedded in it; and whitbed which is somewhere in the middle.

“We find that a lot of grove whitbed is used at the plinth course (stonework at the lowest part of the wall) and that’s because people go out on their smoking breaks and when they lean against the building, they always put one shoe up so you end up with a scuff from the heel. And grove whitbed has lots of shell marks that look like that, so they blend in.”

Roach stone is used to particularly iconic effect at BBC Broadcasting House. “People love touching it,” says Deborah Saunt at DSDHA architects, which is the firm currently restoring roach on the Economist building. “Any stone in London gets dirty. With roachbed, it gets more characterful as it ages. Some people say you should clean it, others say you shouldn’t, so it’s a matter of personal taste.”

This restoration work was bread and butter work for Albion Stone when it started in south west London, but then the firm persuaded the Crown Estate to lease it the quarries that weren’t being used as a way to rejuvenate a business that was flagging as a result of changing fashions. In the 1960s, when Poultney’s grandfather Harold ran the company, Brutalism was at its height, which meant increased demand for concrete, glass and steel, but not much for classical stone. “When the lorries turned up, we didn’t know whether to load them up or photograph them, they were so rare,” says Poultney.

A building boom meant business picked up in the 1980s, but then dipped again during a recession in the early 1990s. By this time, Poultney’s father had left him in charge of the business and it was time to dig themselves out of economic woe again. Albion decided technology was the way to do this, so oversaw the introduction of a wire saw cutting method that could be taken down into the mine and provide custom cuts according to the clients’ needs. 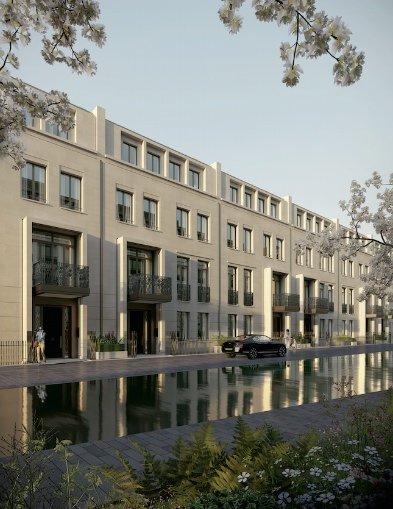 This is the way the industry is going, Poultney says, requiring more work to be done at the quarry itself, then transporting them ready to crane into place, so builders can get rid of unsightly scaffolding and the laborious process of fixing each stone into place. Poultney says this is essentially “keyhole surgery for the island”, avoiding the scars on the landscape that come from intensive quarrying. This wasn’t a concern in Wren’s time. St Paul’s, for instance, uses 3 million cubic feet of Portland Stone, laid one block on top of the other, with strategic blocks removed the higher up you went to reduce the weight of the building and stop it sinking into the ground.

These days, cheaper materials like steel and concrete are used to construct, while thinner pieces of Portland Stone are used as attractive cladding over the top. This means smaller quantities of it are being used and it’s largely an attractive premium facade that architects use to stamp a London identity on their buildings or convey a certain prestige.

This is certainly the case at Chelsea Barracks, that uses Portland Stone on all 67 of its new build apartments and all 13 of its new townhouses. “It wasn’t prescribed that we use Portland Stone, we could have used brick and plaster, but we went that extra step because people want to buy into the full depth of the location, and it helps to convey a sense of place,” says Francesca Sharkey from its developer Qatari Diar.

This is good news for the sustainability of the island, as thinner stone cuttings means there’s more left for future projects. Half of Portland’s stone has been excavated, but if the rate of extraction stays as it is, there’s still 1,000 years’ worth left. But will anyone want it? “Pollution is so low in London compared to what it was when coal fires roared and factories lined the Thames that not a lot of stone is weathering away, so the amount we’re supplying for restoration is about a bucketful, to be honest. Together with most of the industry, we rely on new builds, it’s 99 per cent of our work,” says Poultney.

The phenomenal demand for homes in London and high land values means that developers are having to build densely – often high – to meet their profit margins and heavy stone is often passed over in favour of glass. The cost of this premium material may also count it out on all but the most exclusive developments, especially if the housing market crashes again.

But there’s a glimmer of hope: “English Heritage and planning authorities want developers to keep using it to keep a level of consistency,” say Alexander Lewis, residential development partner at Knight Frank, “so a lot will be determined by them. Architects will continue to push boundaries on design, but there will have to be a balance between that and the cost.”

As in the past, the future success of Portland Stone is fused irrevocably with the fate of London.