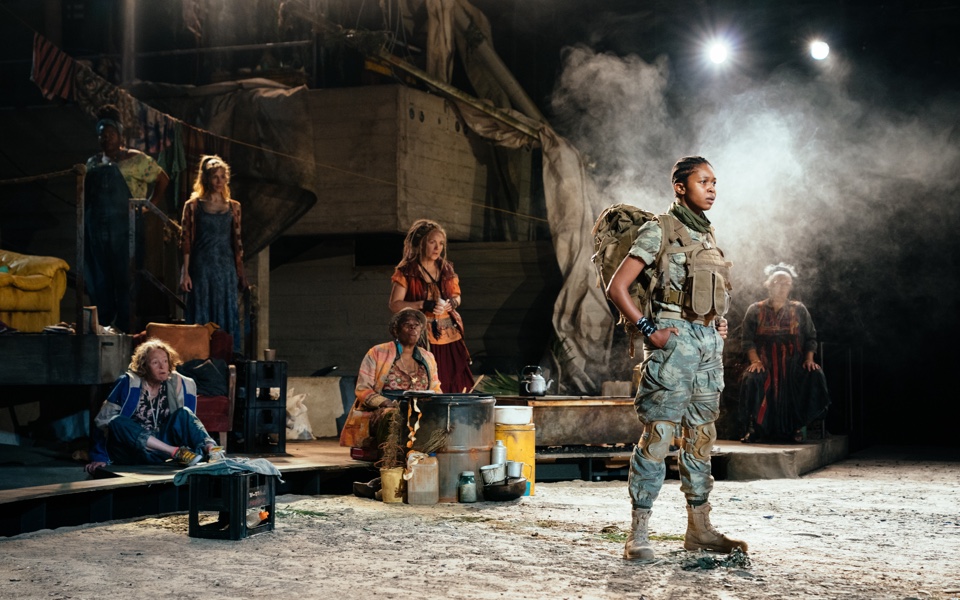 Everything old is new again. The National Theatre is back with its first full-capacity show since lockdown, and like the Young Vic it has decided to run with a modern reimagining of a work from antiquity. Directed by Ian Rickson, with a script by the Ted Hughes Award-winning and Mercury Prize-nominated spoken word artist Kae Tempest, Paradise is an adaptation of Sophocles’ Philoctetes.

The story takes place during the events of the Trojan War. A prophet has told Odysseus that victory can only be secured with the help of Philoctetes, a wounded archer whom he had previously marooned on an island. Odysseus returns to re-enlist Philoctetes, but with quite reasonable apprehension that he may not be welcomed by his erstwhile brother-in-arms. As a precaution, Odysseus hides, and sends Neoptolemus, son of the dead hero Achilles, to lure the bowman back. But years of loneliness, and festering wounds – both physical and psychological – mean that Philoctetes is not ready to re-enter the world. After the Covid pandemic, the play’s themes of trauma and isolation could be uncomfortably familiar to many in the audience.

The set is a sandy wasteland, bordered by the shanty houses of a group of refugee women, who constitute a chorus. Costumes, props, and references in the dialogue blur the lines between a classical and contemporary setting. The decision to stage this play with an all-women cast might have been a good way to examine the performative masculinity of classical heroism. But here, the characterisations of Odysseus and Philoctetes allow no room for subtle reflection. These are drag acts, with the exaggerated gender signifiers dialled up to 11.

Anastasia Hille plays Odysseus as the kind of public school-educated, sun-baked army colonel who would would conspire to topple African regimes over a bottle of claret, while Lesley Sharp’s Philoctetes hobbles about the stage, bellowing for attention like a foul-mouthed, histrionic Phil Mitchell. Both are impressive, but neither is remotely believable. Sharp especially is magnetic, but so overstated that she frequently strays into unintentional parody. Gloria Obianyo’s Neoptolemus is more grounded – perhaps because being trapped between two such broad performances demands restraint – but even here, the script makes it difficult to follow the logic of her character’s actions.

One of the better aspects of Paradise are the segments in which the chorus functions as a chorus, speaking together, delivering lines in verse. Elsewhere though, their more playful tone jars alongside the three main characters. The chorus is also too large, and insufficiently differentiated to justify the attempt to make its individual members into distinct characters. We are given no reason to care about them, and no explanation of why it is only appropriate for one of them to leave the island. When, at a very late stage, it is revealed that a member of the chorus was Philoctetes’ occasional lover, it comes more as a distracting afterthought than a surprising plot twist. It makes the audience question the good faith of Philoctetes earlier claims of misery, and makes them seem even more self-pitying and self-serving.

Where Kae Tempest is involved, there is always the threat of performance poetry, and Paradise is bookended by two lengthy outbursts from a member of the chorus. Like the songs in The Lord of the Rings, these could have been omitted without any substantial detriment. There is one rousing speech delivered by Philoctetes; a Cobynista’s diatribe against the state of the world. It drew enthusiastic applause from an audience exhausted by neoliberalism, disease, Brexit, and racial injustice, but it was the voice of the playwright, not the character that they were hearing. Indeed, in the context of the play, the speech made only partial sense.

Paradise lacks consistency, and at an hour and fifty minutes it is far longer than the plot demands, but while Sharp’s performance as Philoctetes does not entirely work within the structure of the play, it is still worth a trip to the South Bank.

Also Read:
Changing Destiny at The Young Vic is a disappointing return
Share