Changing Destiny at The Young Vic is a disappointing return 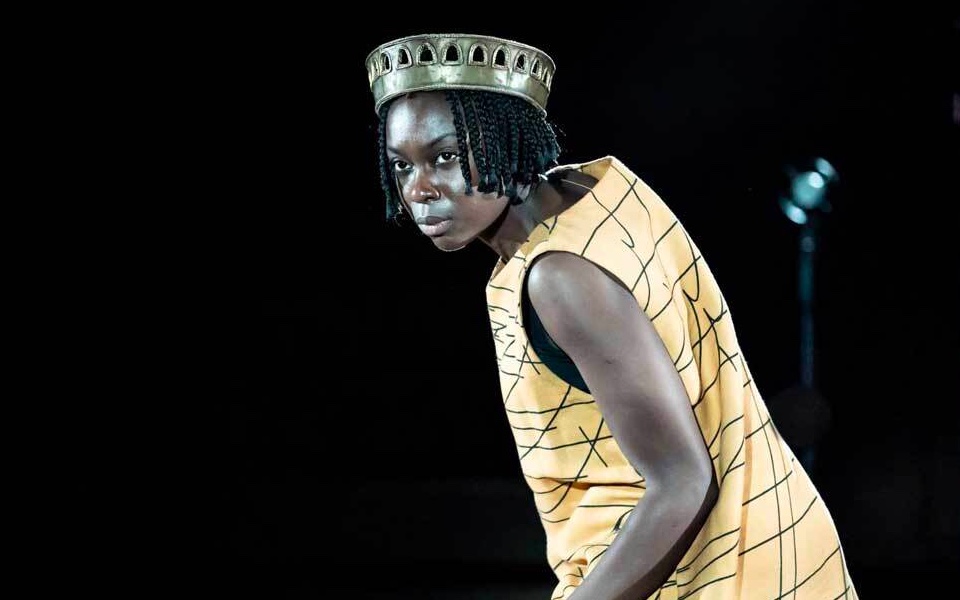 The Young Vic is rolling out the big guns for its first post-lockdown production. Artistic Director Kwame Kwei-Armah helms a new play by Booker Prize-winner Ben Okri, with sets and costumes from architect David Adjaye, whose design for a Holocaust memorial was approved last week for installation next to the Houses of Parliament. Expectations were high, but even with the best will of an audience happy to be back in the theatre, Changing Destiny an unsatisfying affair.

The play is based on ancient Egyptian poem The Tale of Sinuhe, which tells the story of a courtier who overhears conspiratorial talk about the death of the king, and, fearing strife, chooses to flee the country, eventually seeking refuge in Canaan. There, through working hard and marrying well, he becomes a powerful figure, and yet he is left spiritually bereft by his moral failings and a longing for his homeland.

Composed around 1875 BC, the poem weaves fictional elements into historical events, like an antique forerunner of Wolf Hall. Scholars have cited it as a possible influence on other stories of cultural significance such as the Biblical tales of Jonah and Joseph, or the works of Homer. The original text is relatively short, only 600 lines, but densely packed with events and ideas, which which are open to myriad interpretations. It is a work ripe for reinvention, but in a production with many shortcomings, the most obvious problem with Changing Destiny is the script.

Okri seeks contemporary resonances in his adaptation, with a focus on identity and xenophobia. These are there in the source material, and could have been developed into something compelling but Okri does too little to establish the character of Sinuhe, and instead of revealing concepts through action and dialogue, and trusting the audience to join the dots, he has the characters blankly state his theses.

Apparently drawing inspiration from another famous work of the Middle Kingdom called The Debate Between a Man and his Soul, most of the play is presented as an inner-monologue, but between two actors; one playing Sinuhe’s body and the other playing his spirit, who – in Okri’s retelling – has been abandoned in the flight from Egypt.

Before the play begins, the two actors, Joan Iyiola and Ashley Zhangazha, determine who will play which role. They walk on to the stage, out of character, greeting the audience, then play a best out of three game of Paper-Rock-Scissors. Once the parts have thus been assigned, the stage manager enters to sort out the prop bins that are placed around the stage. The actors do their best with what they have, and their earnestness and vitality do elevate things, but in the end the clunky dialogue, flat plot, and amateurish metatheatricality of the production are insurmountable.

Even the set is impractical. One of the main features of theatre in the round is that the audience can view the action from all sides, but here a pyramid sits mid-stage, its tip touching another which has been inverted above it – hanging from the ceiling like a pentahedral stalagmite. While they are visually arresting, they make it impossible to see everything that is happening on the stage, so that every seat in the house is transformed into one with an obscured view. Fortunately, the lower pyramid folds down and spends much of the play on the floor, serving little useful purpose. Meanwhile, video effects are intermittently projected onto the upper pyramid, but the quality of these is jarring when juxtaposed with the general lo-fi aesthetic.

Changing Destiny’s run-time is only an hour, so you would expect it to fizz with propulsive energy, but there are long stretches where little takes place. You must make allowances for the constraints that Covid imposed, especially for the actors, but these cannot account for the problems with the production design, script, or direction. This was a disappointing return, but given the difficulties confronting the performing arts during the pandemic, we must nevertheless be grateful that it is a return.