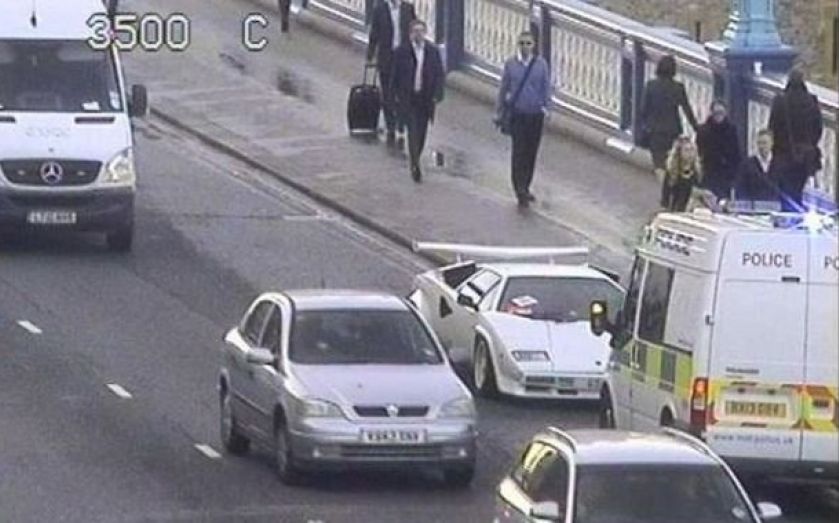 Anyone missing a Lamborghini? Because one has been parked up on Tower Bridge for nearly 24 hours…
People commuting home over Tower Bridge last night – and coming into the City again this morning – were greeted with the unusual sight of a white Lambourghini Countach parked up on the Tower side of the road.
The car was apparently left there overnight after its driver ran out of petrol.
But having to leave the £250,000 car unattended on a central London road at night was the least of its owner's worries. Police attempting to trace who it belonged to realised the culprit was a wanted man – there was a warrant out for him on a harassment charge.
City of London police said in a statement that the man was “arrested and taken to an east London police station, where he was passed into the custody of the Metropolitan Police.
“He remains in custody”.
The force added: “The vehicle remains there and is not causing an obstruction. Officers continue to monitor the situation”.
DLVA records reportedly show that the licence plate of the vehicle – 69AE – is registered to a black Land Rover, raising the possibility that the unnamed motorist could face a fine for using it on a different vehicle.
Naturally, Twitter and Instagram users found it hilarious:
https://twitter.com/Vitt2tsnoc/status/520163781536911360
https://twitter.com/TinTopsuk/status/520160504036466690
https://twitter.com/NickTheGreek81/status/520118818665168896