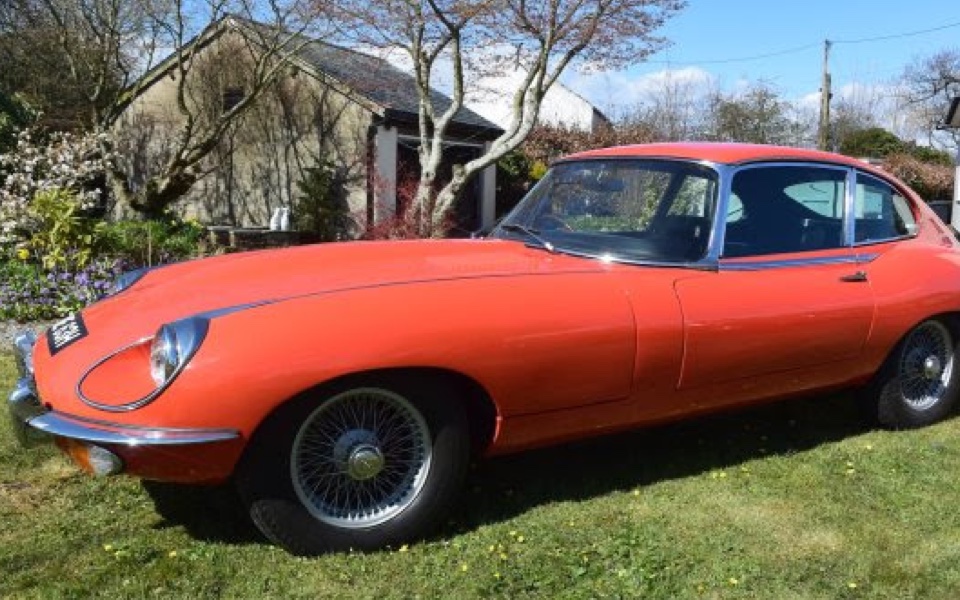 A Jaguar E-Type owned by a bona fide Fleet Street legend is to go under the hammer, with a price of £55,000 expected for the 50 year old motor.

The tangerine-orange Jag was the company car of Express cartoonist JAK, a nugget of information that will drain the colour from the faces of many contemporary journalists and their rather more limited corporate perks.

The 1970 E-type originally came with the registration number ‘JAK 449’, referring to the pen name of Raymond ~Jackson, a man renowned for his love of fast living and fast cars.

Jackson claimed he was the first cartoonist to break an unwritten rule not to lampoon the Royal Family – something that led Prince Philip to collect his original drawings. Jackson died in 1997 aged 70.

The E-type, in ‘Porsche Tangerine’, has been owned by the same person – only its third owner – for 45 years, according to H&H auctioneer Ian Cunningham. He expects it to fetch up to £55,000 at the Imperial War Museum Duxford sale on 26 May.

The right-hand drive E Type was manufactured on 23 April 1970 and dispatched to dealers Henlys of London a few days later. It was first registered as ‘JAK 449’ to the Daily Express newspaper on 20 May that year. It was bought by the current owner in 1976 and now bears the registration ‘BME 63H’, with the original personal plate being kept by the first owner.

In 2010 the engine was given an overhaul using a new crankshaft, big end bearings, clutch, flywheel and uprated oil pump. It also has its chain followers and tensioners replaced.

Viewing and bidding will be available at the venue as well as online and by telephone.