With its fancy turrets, myriad windows and pastel-lemon façade, Ocean House is an imposing place. Found on the bluffs of Watch Hill, a well-to-do town in Rhode Island, on first appearances it’s a hotel that looks like a stuffy, Victorian grand-dame, fitted in an overblown crinoline dress, and exuding old-fashioned principles.

In part, its looks are not deceptive, for the iconic hotel (one of only 13 in the world that has a triple 5-Star rating from Forbes) is one of the US’s most-loved due to its timeless approach to hospitality rooted in the Victorian era. From the famous Sunday Brunch – set to a soundtrack of live jazz and attended by Ralph Lauren-clad families – to the relaxed clambakes on the beach, if you want to soak up what New England is really about – and that includes old-school dressing for dinner – then Ocean House is where you come.

Originally opened in 1868, the property is renowned for its storied past and long history of welcoming out-of-towners, who arrive from Boston or New York in search of summer fun. The Eastern Seaboard town of Watch Hill, found at the most south-western point of Rhode Island, the smallest state in America, echoes this with its reputation of being one of the country’s most affluent summer resorts. It is renowned as a more subtle alternative to the glitzier Hamptons.

“There are a lot of powerful, high-net-worth people here, but you wouldn’t know it,” reveals Daniel Hostettler, Ocean House’s managing director and president of the Ocean House Management Collection, which also oversees three other historic New England hotels. “People come here to chill-out, to go barefoot when the mood takes them and to not be seen. It’s an antidote to the Hamptons, with its flashy cars, celeb culture and razzmatazz. That’s just not us.” 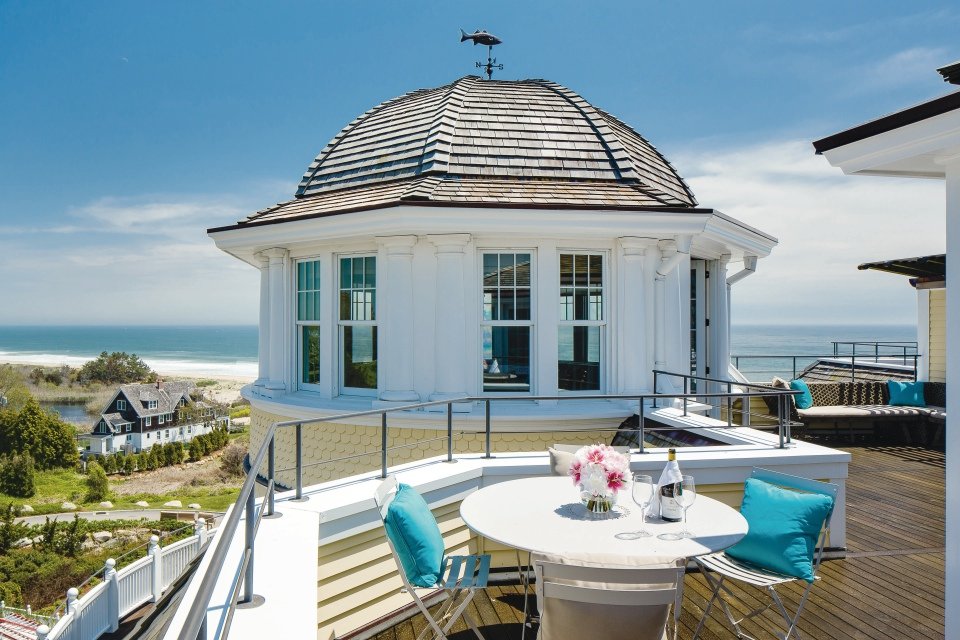 As he talks, he gestures towards a sprawling grey mansion, perched high on the cliffs further along the coast: “I mean, we only really know that the neighbouring house belongs to Taylor Swift because we end up hosting her friends here when she puts on her Fourth of July fireworks party! And I’m only revealing this because it’s common knowledge,” he laughs. “Other than that, I remain tight-lipped as to who our guests are.”

Widow’s walk is a popular spot to propose, but it can be precarious, especially after a glass or two of champagne for Dutch courage. Guests are no longer allowed to go out there alone

Looking at the men’s button-down shirts and blazers and the women’s pressed summer dresses, Ocean House guests are clearly a well-heeled set, no doubt attracted to the polished, warm welcome they receive and the little extras laid on to make everyone feel special. If you want to zip along the coast, there are four Mercedes-Benz cars you can use free of charge. For souped-up New Yorkers not used to being idle, there’s a huge choice of complimentary resort activities to tap into, ranging from yoga to cookery classes in the hotel’s Center for Wine & Culinary Arts. The aim is to make guests feel simultaneously inspired and at home.

“Yes, we stand on ceremony at times,” says Daniel. “For instance, there are dress codes for certain restaurants, although by this we simply mean making an effort with ‘resort-wear’ – and, actually, our guests love this traditional aspect. On the other hand, we like to be innovative and forward-thinking, so we have devised thought-provoking activities, such as our culinary ‘bootcamp’, lectures based on our rich art collection and ‘blind’ wine tastings. Once you’re here, we want you to feel like this is your second home, so we’re also a gratuity-free property and guests will find complimentary mini-bars in their rooms, stocked with drinks and gourmet snacks. We’re not about charging extortionate amounts for a Diet-Coke.” 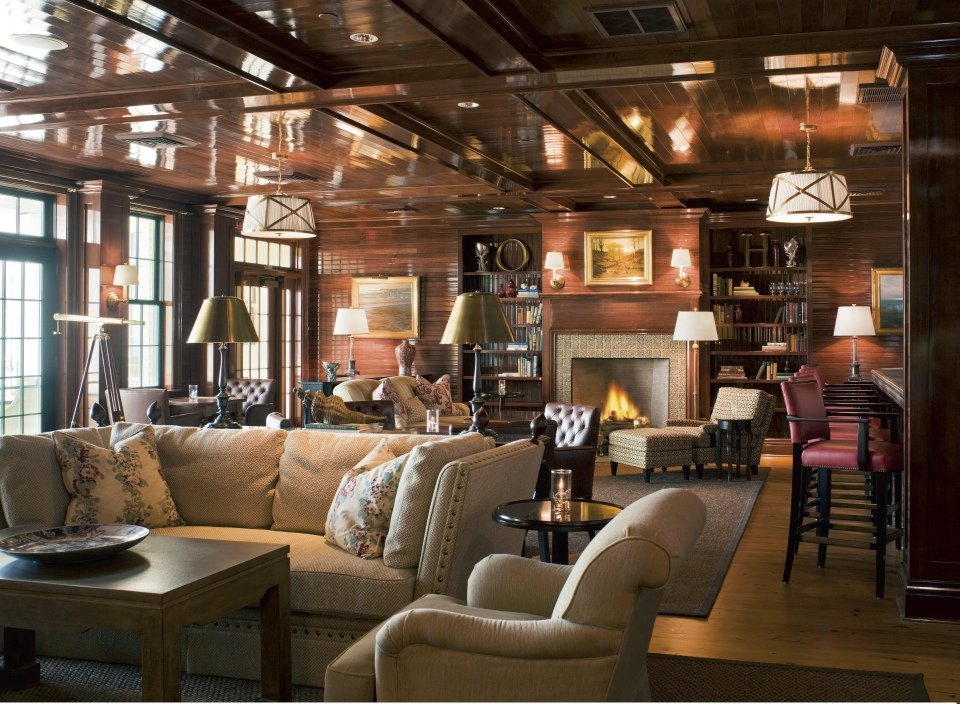 A recent multimillion-dollar refresh of the guest rooms and a new haute cuisine restaurant – Coast by Jennifer Backman – means interiors are polished with a coastal-chic theme. It’s not the first time the owners have invested huge amounts into the property. Back in 2005, local residents, Charles and Deborah Royce, stepped in after the hotel had fallen into disrepair. “It has such an important place in the hearts and minds of Watch Hill residents,” Charles says, making a rare appearance over breakfast. “We couldn’t bear to see it go, “ agrees Deborah. “We just had to do something. It’s an iconic place.”

So, along with investors, they rebuilt the property from scratch, at a cost of $146m, with the aim of restoring it to its former glory. Back then, at the couple’s almost maniacal insistence, many original features were recreated in minute detail. The front of the property, for instance, is an exact replica of the hotel from its turn-of-the-century heyday, including the original signage and the 247 windows repositioned in exactly the same place. A grand, oversized stone fireplace in the lobby was rebuilt twice to get its position exactly right and the original reception desk was revamped for modern use. The period feel has further been retained with some 5,000 period artefacts saved, such as lighting, photographs and the hotel’s first phone booth (originally installed so holidaying Wall Street financiers could call back to the city) repurposed as a display cabinet.

The latest revamp has seen the 49 bedrooms uplifted with modern-designed bathrooms – hexagon-shaped floor tiles, marble soaking tubs and rain-showers. While in the bedrooms, huge Queen Anne Beds are laid with luxury linens, including a monogrammed pillow to reflect each guest’s surname, and shutters open out to give views across the rolling Atlantic. 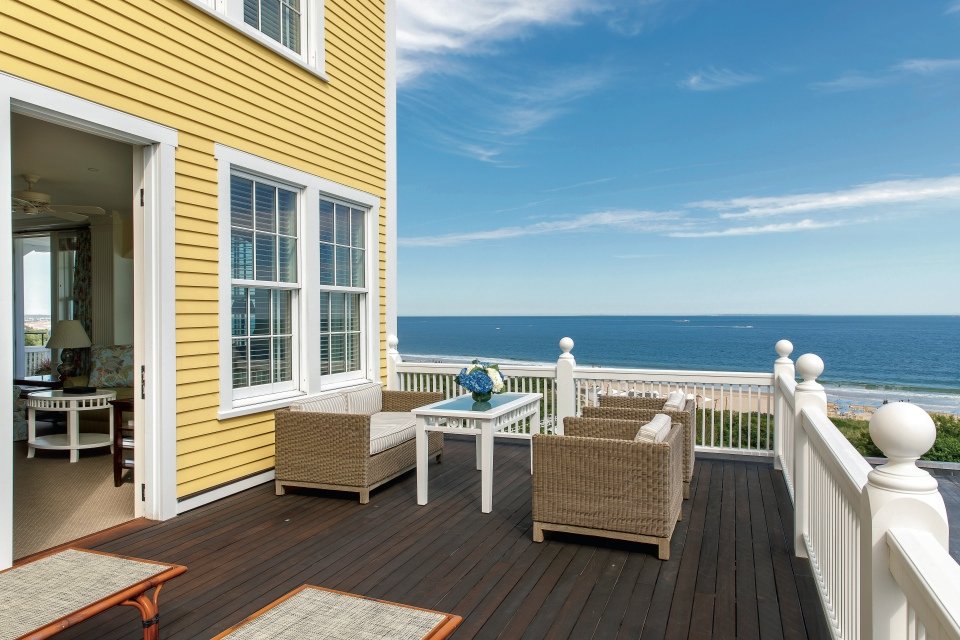 For something extra special, there are 18 signature suites – each decorated with a different theme in mind. The Tower Suite, a chic hideaway for two, is one of the most charming and the most romantic. Wood-panelled walls, like the inside of a ship, and dreamy window-seats are accentuated with china-blue-and-white textiles. A mezzanine level gives a unique living room with slate fireplace and bookshelves and opens out to a roof deck with views across to Napatree Point. Best of all, is a spiral wooden staircase leading to the Crow’s Nest – a cosy den area – complete with ladder to lead out to a widow’s walk.

“It’s the most popular spot in the hotel for guests to propose,” says Daniel. “But it can be a touch precarious, especially after a glass or two of champagne for Dutch courage! We no longer allow guests to go out there alone… they have to ask a member of staff to go up with them, just in case!”

A safer bet, perhaps, may be to go down on one knee in one of the restaurants. As a Relais & Châteaux hotel, there’s a strong focus on dining and the highlight is the new Coast by Jennifer Backman. Open nightly, it offers a seven-course tasting menu – including an inventive vegetarian option – which changes for each service to showcase that day’s seasonal and local produce. 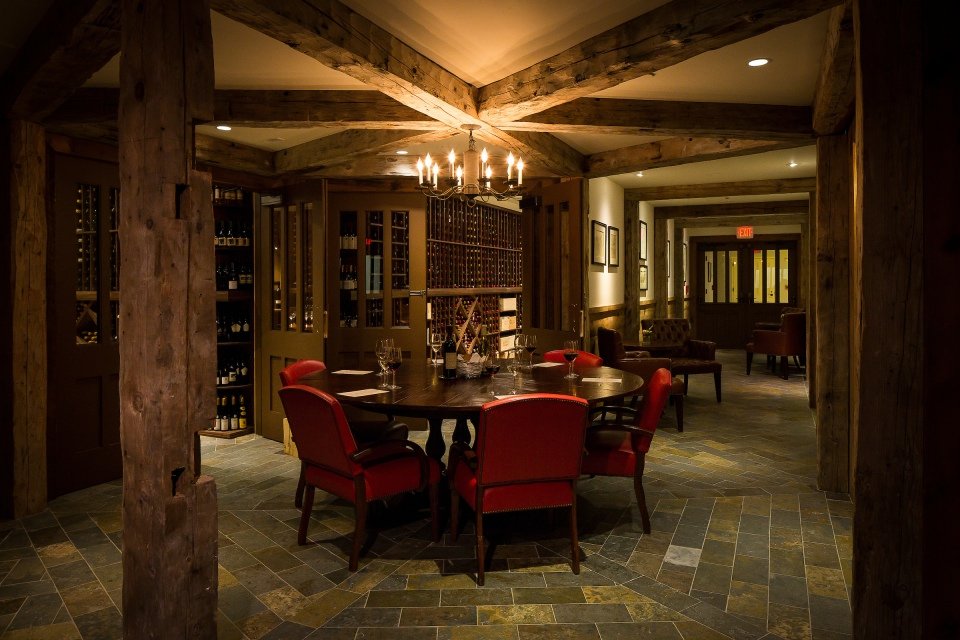 In The Bistro, it’s all about classic New England flavours – oysters, clams and lobster rolls. And once summer arrives, the hotel comes into its own with a range of seasonal openings. Seafood lovers should head to the ‘raw bar’ at The Verandah for a choice of fresh shellfish from nearby waters, shucked to order. While those with a sweet-tooth will be regular visitors to the Below Deck store, with its fresh doughnuts, gelato and milkshakes. The Secret Garden Champagne Bar, showcasing Veuve Clicquot cuvees and found tucked away in the gardens, calls in a millennial crowd with its chill-out soundtrack courtesy of a resident DJ.

From wandering around the hotel’s extensive art collection – there is a wide range of pieces from artist Ludwig Bemelmans, famous for his Madeleine children’s books as well as unpublished cover sketches for the New Yorker – to taking a dip in the spa’s 1920s-style lap pool, there’s much to keep you amused at Ocean House. The museum-worthy art exhibits have become such a pivotal attraction that the hotel has even started to offer a lecture series, guided art tours and art lessons for inspiration.

Watch Hill itself is a quaint town, lined with old-fashioned stores, selling candy and seaside paraphernalia and, in front of its main boardwalk, lies wide beaches, trimmed with sea-grasses and battered fences. Come night-time, the sky is heavy with stars, and in the distance, a lighthouse flashes its silent warning. Groups of friends are toasting s’mores around a fire on the beach, huddled under blankets on Adirondack chairs. It’s the very definition of an iconic New England summer.