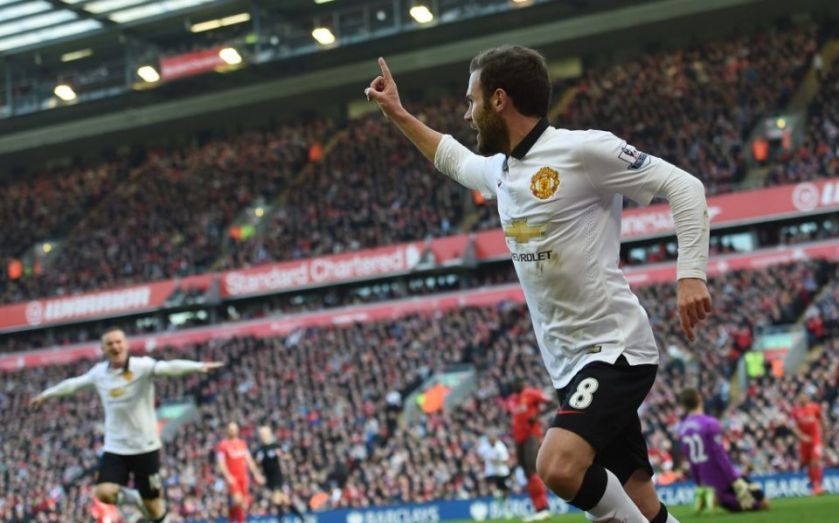 With Manchester United taking home three points from their trip to Anfield, Liverpool will need to make a small slice of Premier League history if they are to qualify for next season’s Champions League.

Thanks to two Juan Mata goals and Steven Gerrards’ rapid red card, Louis van Gaal’s side inflicted a first league defeat in 2015 on Liverpool that takes them five points ahead of their arch rivals in the race for a top four finish.
Since England were awarded four entrants to Europe’s premier club competition, no team in fifth with eight games remaining has been able to make up such a gap.
In fact, since the 2001/2002 season, only twice has a team in fifth after games managed to overhaul a side above them and book their trip to the continent.

In 2006, Arsenal – sixth after 30 games – trailed fourth-placed Tottenham by two points before finishing two points ahead and the Gunners repeated the trick two years ago to pip their North London rivals to the Champions League post.
If Liverpool, Tottenham and Southampton are to unclasp United’s tightening grip on the treasure chest of fourth place, they will need to make up five points (six in the cases of Spurs and Saints) on a United side who seem to have finally found their swagger right when it’s mattered most.
For 13 years, “the race for the top four” has been one of the Premier League’s story lines on the side, yet history suggests it’s a race already won at this stage (unless you’re Spurs and the chaser looming behind you is wearing red with white sleeves).
Liverpool’s tough task is made harder by tough trips to Arsenal and Chelsea, although hope is provided by the fact United face Manchester City, Chelsea and Arsenal before the season is through.