Apple keynote 2019: Everything from inside the Steve Jobs theatre, as it happened 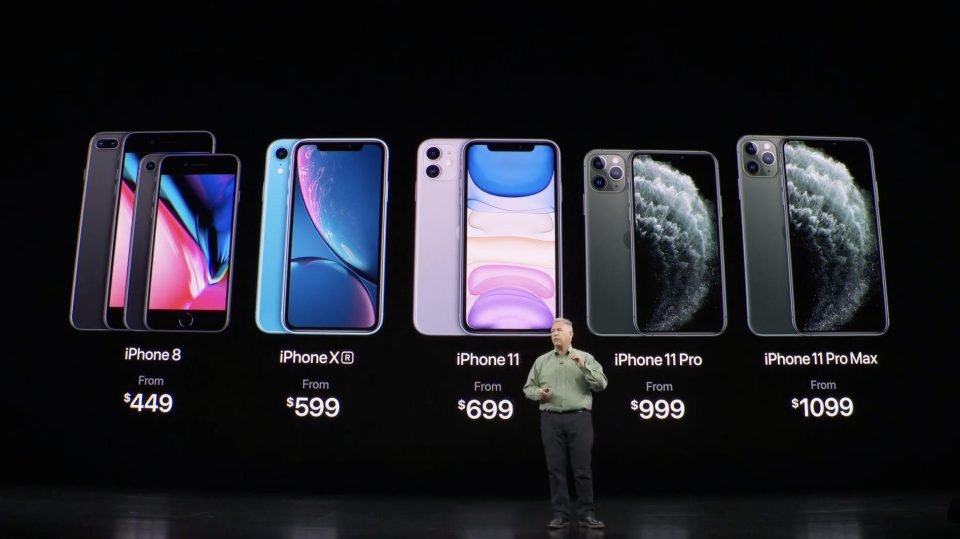 This was the live blog of the Apple 2019 keynote, featuring the debut of the iPhone 11 family, the Apple Watch Series 5, the seventh generation of the iPad and more.

It will feature three cameras on the back, across both the 5.8inch and 6.5inch models with OLED screens. The Pro will also have a new Super Retina XDR display, not seen before on iPhone, and be powered by an A13 Bionic chip – making the CPU capable of 1 trillion operations per second.

The triple camera system includes a wide camera, a telephoto camera and an ultra-wide camera, providing a 4x optical zoom. Deep Fusion, a new feature which will be part of an update to iOS later this year, uses the machine learning part of Apple’s new chip to shoot nine images and combine them to pick the best bits for an optimum photo.

All three cameras shoot 4K-quality, 60 frames per second video. iOS 13 will incorporate video editing features into the Photos app, allowing users to edit videos on the iPhone rather than in separate software.

The iPhone XS and XS Max are being discontinued, leaving only the iPhone XR and the iPhone 8 in the rest of the family.

First up is the iPhone 11, the new version of the iPhone XR. Available in six new pastel colourways, with two cameras on the back and housed in the same square bezel as the rumoured triple-camera iPhone 11 Pro.

It has a 6.1inch LCD retina display, making it slightly cheaper than the OLED iPhone XS and XS Max. The cameras include two 12MP lenses, including an ultra-wide camera for larger shots. The main camera is three times faster in low light.

The dual camera system will also feature a night mode for darker scenes. It supports 4K video, and you can switch between the two cameras during filming. The front camera has been updated to a 12MP TrueDepth sensor, with 4K and slow-motion video functionality. Apple predicts this will create the advent of the “slofie” – a slow-mo selfie.

Inside the iPhone 11 is an A13 Bionic chip, an update from the iPhone XR’s A12 and the fastest-ever CPU and GPU in a smartphone. It has one more hour of battery life than the XR, faster FaceID, wireless charging and water and dust resistance.

Cook says the iPhone X was the most popular smartphone in the world, with industry-topping 99 per cent customer satisfaction rates.

Apple Watch Series 5 is here – with an always-on retina display that never sleeps, no matter what angle your wrist is at. It’ll dim when not in use, and then can be brought back to full brightness with a wrist movement or a tap of the screen.

It promises 18-hour battery life despite the new display, with optimised complications and display settings for workouts. The Series 5 Watch will also have a built-in compass, available in an app and as a complication.

Apple says it’s using the Watch in health studies not just for research on your heart rate, but also for menstrual cycle tracking and hearing. In the US a new Research app has been created for those who want to enrol in the studies, all using anonymised data.

Series 5 starts at $399, and $499 for cellular models, and is available to order today. The Series 3 is being reduced to $199, while the Series 4 is being discontinued.

The iPad family is getting its own operating system – iPadOS. To date, it has run on the same system as the iPhone.

But there’s also a new iPad in town, the seventh generation. The retina display is being increased to 10.2inch, with nearly 3.5m pixels. It’ll contain an A10 fusion chip, which Apple says makes it two times faster than the US’ leading PC.

iPadOS will bring a desktop browser to the iPad, ending the days of mobile web viewing on the tablet. The Photos app is getting some enhanced filter abilities, while Apple Pencil is also receiving new functionality.

For the first time, the enclosure will be made from 100 per cent recycled aluminium. The cost starts at £349 in the UK and $329 in the US, and will be available to order from today (shipping on 30 September).

Chief executive Tim Cook says the trailers for its upcoming exclusive TV shows on Apple TV Plus, debuted earlier this year, have been viewed more than 100m times.

A new show to come is the dystopian sci-fi See, starring Game of Thrones and Aquaman star Jason Momoa. Directed by the people behind the Hunger Games and created by the Peaky Blinders team, it depicts a future world where all humans have lost the ability to see – until a new generation is born with the power of sight.

Apple TV Plus will provide access to a library of exclusive TV and movie content. It will debut on 1 November in over 100 countries with new shows added every month, costing $4.99/£4.99 a month.

“All of these shows for the price of a single movie rental… This is crazy!” says Cook.

He adds that all new purchases of iPads, Macs and iPhones will come with one year of Apple TV Plus, for free.

We’re being shown a deeper look into some of the new games on Apple’s streaming Arcade service.

Available on mobile, desktop and TV, Apple has secured more than 100 new and exclusive games for its subscription service which can be found in the App Store.

All games will be available to download through the monthly subscription fee, rather than a cost per game model.

Starting on 19 September, Apple Arcade will be available in over 150 countries for $4.99 per month as a family subscription. It’ll also have a one-month free trial.

Welcome to Apple’s 2019 keynote, where we’re expecting the debut of the iPhone’s 11th generation, new Apple Watches, revelations about Apple TV+ and Apple Arcade, and more.