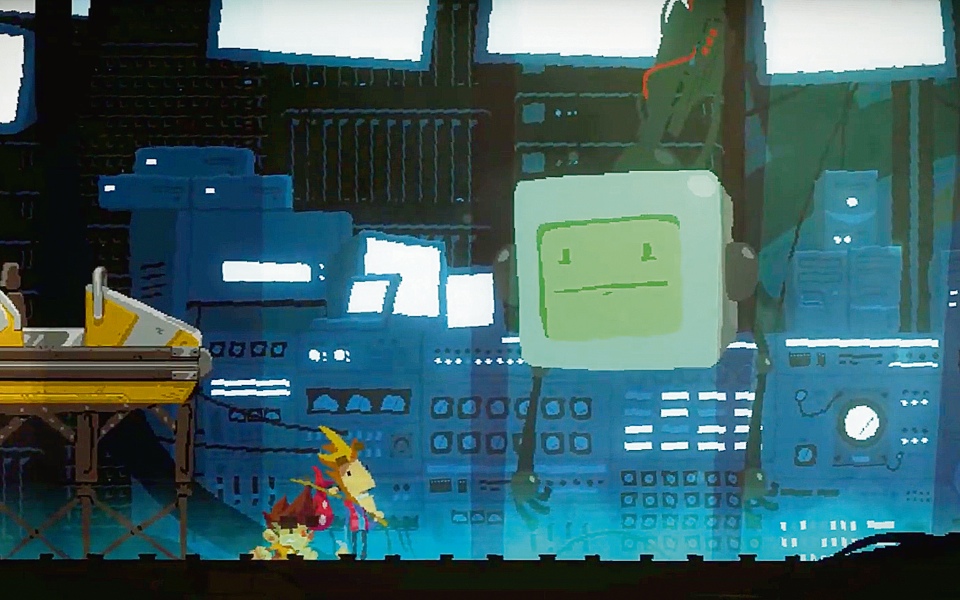 You might think that Lair of the Clockwork God, a game that’s one half classic point-and-click adventure, and the other half a modern indie darling platformer, would tend to pull the player in two painfully opposing directions. These are seemingly irreconcilable genres of the past and present, a square peg and a round peg, violently smashed into a triangular hole.

But Clockwork God manages to make it blend. It stars Ben and Dan – cartoonish caricatures of the game’s writers and designers, whom you can switch between at will – on a mission to stop every apocalypse from happening all at once. Ben is an old school point-and-click guy, looking at objects and talking to other characters, while refusing to muster anything as strenuous as a jump, or even to step off ledges. Dan, meanwhile, has flung himself headfirst into the popular arena of indie platformers, double-jumping, stepping on pressure pads and steadfastly refusing to pick up any useful items or pull any switches.

The dialogue between the co-dependent pair is relentlessly funny and self-aware, dense with British humour and armed with scalpel sharp satire of the genres it saddles. Good natured parody of modern indie games’ infatuation with gravely serious themes sits comfortably alongside wanking jokes, though the script takes itself just seriously enough to avoid veering into outright silliness.

As Dan, you leap around levels, typically until you reach some kind of impassable barrier. Switch to Ben and you can explore the same level from his less athletic but more vigilant perspective, interacting with parts of the scenery to solve puzzles. The flavour of these will be familiar to anyone who’s played a LucasArts adventure before – games like Monkey Island and Day of the Tentacle – using lateral thinking to combine items in Ben’s inventory (though Dan insists it be called “crafting” to keep up with the kids) before using them to set off some unlikely sequence of events. These are rarely too taxing on the grey matter, but the puzzles are well thought out, and the platforming is fun enough in short bursts.

More than just the sum of two disparate genres, Clockwork God is a brilliantly written exploration of old versus new, of gaming tastes past and present, of relevance and irrelevance. Any 30-something who grew up playing PC games will fall immediately under the spell of the game’s endearing and consistently hilarious protagonists.