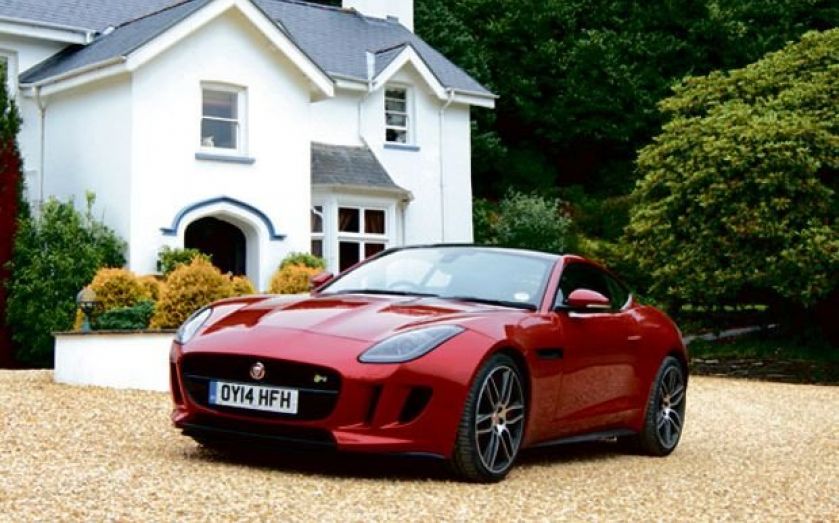 Getting into an F-Type coupé is like the first haircut you have when you graduate. You’re starting to face reality and a job interview is on the horizon. Every mirror solicits a double-take – you never knew you could look so smart. But this car is stunning from every angle. There are great works of Italian sculpture, or islands in Mauritius that can’t boast that. It’s as close to aesthetic perfection as anything I’ve driven. Jaguar will, however, allow you to muck it up with carbon fibre mirrors, red or yellow brake calipers and coloured stitching on the seats. Please don’t do this. I love this car and shed a silent tear for each and every one that is manhandled.
It’s more than just a pretty face, though. As soon as you start it up, it can’t wait to show off how clever it is, and you forget about the looks altogether. If you drive in London, you’ll appreciate the sensors that pick up on traffic passing by on either side, and the display warnings on the wing mirrors themselves. It’s pure showing off, but I love the button that closes the boot.
I had an ambitious itinerary for my day with the FType: dinner at Ynyshir Hall, West Wales (a dozen miles north of Aberystwyth). I left London at 12 with nearly 300 miles to cover, deciding to go via the Brecon Beacons. I’ll summarise the first half of the journey: traffic; petrol; more traffic; a pit-stop; Cheltenham; Cheltenham?; sharp words with the sat-nav; more traffic; Welsh border. By this point I was hideously late but had made several important discoveries. The F-Type rides very stiffly indeed. The way the steering wheel drops into place when you start the engine is absolutely the coolest thing in the world. The Meridian sound system is the best I’ve heard in a car. Normally in a car like this, the exhaust noise is the only sound that matters, and the F’s exhaust is indeed a thing of beauty, but honourable mention must go to Meridian’s 770-watt setup.

The Jaguar F-Type is an outstanding sports car

And so I passed into Wales, which for once was bathed in sunshine. Monmouth gave way to the Wye Valley, which begat the Brecon Beacons, which led on to… you get the idea. I had ground to make up, and even with 542bhp at my fingertips, the A-roads of Carmarthenshire and Ceredigion are not always obliging. Phonecalls were made, dinner was rescheduled and I was free; to enjoy the scenery and the hypnotising repetition of “power-brake-turn-power-brake-turn”.
Ynyshir Hall is exactly where you want to arrive after eight hours on the road. Outside, isn’t just quiet, it’s silent. Inside it’s warm and homely. Like the Jag, it’s British luxury at its best, a combination of familiar comfort and immaculate presentation.
It’s a small hotel, run by a petrol-head called Joan, who is rather taken with the Jaguar. Keen to sing the area’s praises for driving nuts, she’s full of recommen dations for good routes.
Firstly though, there’s a long-awaited meal to be had. Michelin-starred chef Gareth Ward puts together food I’d drive twice as far to eat: Welsh wagyu beef fudge; duck liver with smoked eel, green strawberry and raspberry – all of it delicious. 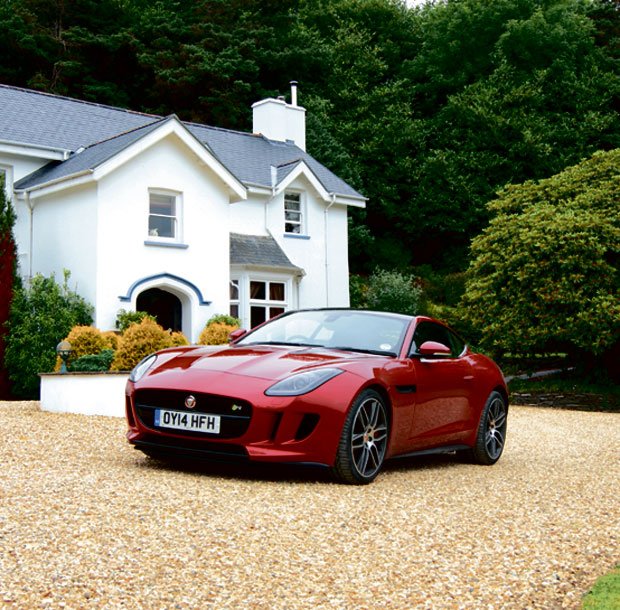 The F-Type at ease outside Ynyshir Hall in Wales

In the morning I headed north-east to Macynlleth and into the Cambrian mountains (one of Joan’s tips). This is driving heaven. Between Forge and Dylife is a memorial to legendary Welsh broadcaster Wynford Vaughan Thomas, who decreed the view that spot commands of Snowdonia the finest in all of Wales. It’s hard to disagree. I spent the rest of the day making my way south again, along some of the best roads I’ve ever seen. We should be ashamed of our pot-hole-ridden roads in England; I can’t believe the Welsh don’t brag about this more. I can only assume they don’t want us coming over and spoiling it for them. Sorry, Wales, your secret’s too good to keep. This is where the F-Type R shines, where it’s most at home. The stiff ride makes sense on roads like these and, to an extent, so does that immense V8 engine.
A writer whose opinion I respect greatly recently argued that this car has too much power. I hadn’t driven the F-Type at the time, and I didn’t believe him. I couldn’t imagine gunning down an open road and thinking “actually, less of this would be nice”.
But over four days, I drove the F-Type as fast as I dared, on A-roads, B-roads, single-track lanes (a terrible idea – why do such things still exist?) and motorways. And at the end of the four days, I realised that not once had I put my foot flat down. Not even for a second.
This brings me back to the ride. Having returned to the home counties, I took the Jag down to the Surrey hills, a final thrash round some country roads before I had to give it back. There are some lovely roads down there, round Billingshurst way. But at F-Type speeds, they don’t so much undulate as corrugate. Overtake a postman with a dab of the right foot and you’re suddenly into the nervous nineties, really working to keep things in a straight line and wondering if the next pothole will dislocate your shoulder. Even now I’ve prised my fingers from the wheel, I’m not convinced it was fun.
But this is hardly Jaguar’s fault; it’s built the best sports car of a generation. It’s the rest of the world that needs to change to keep up.