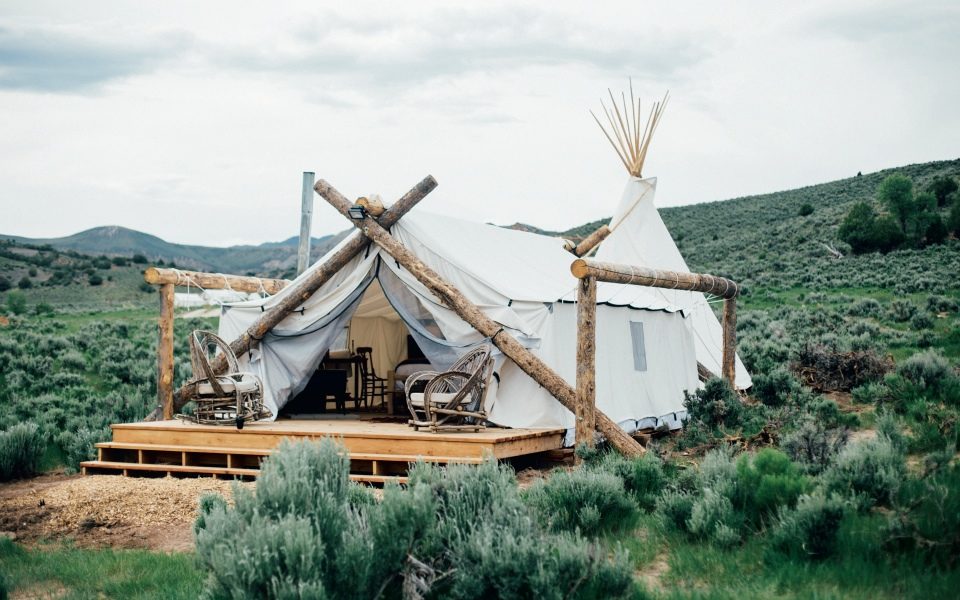 In the UK, a diamond-mesh fence tends to signify you’ve arrived at the perimeter of a day-release prison or, perhaps, a scrapyard.

Not so in America. And especially not in New York: a goodly portion of its waterfront is lined with the stuff. But somehow the Yanks manage to put these utilitarian barriers to use in a way that looks good. Cool even, in a post-industrial kind of way. At least that’s what I thought when I took in the view from my tent on Governors Island. Canvas doors pinned, before me was a triangle postcard of old lady Liberty, underlined with an incongruous wire check.

When I say tent, I mean tarpaulin dream theatre, where ‘luxury and rustic style meet’. The set of a promo shoot for a Ralph Lauren perfume. Pine-wood floors, faux explorer ornaments and a king-size bed dressed in sheets that make Egyptians weep. An en-suite bathroom too. Ensconced in this cottony cotch, I wondered whether a nation’s preferred choice of partition reflected the character of its people. The Irish and their dry-stone walls, rugged and charming. The thorny English hedge, a pretty way of keeping the world at bay. My train of thought was interrupted by my fellow campers, who were playing lawn games and eating smores – a sort of marshmallow cookie – by the campfire. It was unnervingly organised; Cub Scouts meets The Truman Show.

This summer was Collective Retreats’ first season on Governors Island. It also marks the first time anyone’s been permitted to stay here overnight. But for all of the tempting novelty ‘glamping in New York’ promises, it will no doubt strike some as odd, particularly if you’re a seasoned canvas queen. This experience, it turns out, is more akin to pitching up at a bijou festival than escaping to the wilds of the South Downs. Cycling round this 178-acre national park in the Hudson Bay is a relaxing affair, green and quiet and quaint. And, if you time your rustication right, you’ll have special access to one of the music events the island hosts throughout the summer. Jazz Age Lawn Party, anyone?

The views – fences notwithstanding – are considerably better than that of a muddy field in Somerset. When you tire of watching the sun set behind that patinated torchbearer on Liberty Island, the heartbeat skylines of Jersey City and Lower Manhattan are ready to receive your awe. All yours from $150-$800 a night.

From this side of the pond, it’s easy to forget that New York is more than just a priapic strip of skyscrapers. The archipelago contains some 42 islands – many of which are more interesting than their footfall suggests. But their popularity is on the rise, primarily down to the city’s new-found love of ferries. When Hurricane Sandy hit in 2012, it flooded the subway and caused major damage to arterial train lines. A subsidised ferry service was launched to mitigate the impact. It proved so popular they kept it going. Then, in 2017, City Hall launched NYC Ferry, which comprised four public transport routes aimed at connecting less accessible boroughs to Manhattan – and each other – by boat.

When Hurricane Sandy hit in 2012, it flooded the subway. A subsidised ferry service was launched to mitigate the impact

This, too, has proven popular – there are now nearly four million rides in a year – giving rise to the launch of two more routes this summer, with more planned in 2019. Travel between the boroughs is now faster and it’s only $2.75 a ride – same as the subway. In turn, commuters are ‘buying’ in areas once perceived undesirable or too far away. This, and the work required to repair Sandy’s mess, has encouraged billion-dollar regeneration on the city’s shoreline and, with it, an influx of curious tourists.

Back at Governors, I spent a languid lunchtime slurping on mignonette molluscs and champagne at the newly opened Island Oyster, which is a cork-popping distance from the ferry stop. My subsequent ride was to Manhattan’s cobble-stone Seaport District, one of the most conspicuous examples of the city’s renovations.

For years it was Wall Street’s snoozy backwater, ‘a touristy wasteland’ occupied by work-a-day chain hotels and Walmarts. Now, it is to Bank Land what Shoreditch is to the Square Mile: boutique hotels, concept stores and rickety cocktail bars. Condé Nast is here too. The big story this summer, though, was the opening of the Cipriani-backed Mr C Seaport, a 66-room shrine to muted Italian glamour. Bedecked in velvet, teak and Cararra marble, like a better-heeled version of The Curtain in Hoxton. Indeed, if there’s any doubt this hood has gone full hipster, the group of androgynous teenagers I saw outside South Street Seaport Museum wearing ‘Kids for Civic Engagement’ T shirts was indubitable confirmation.

Entirely new is nearby Pier 17, on the water’s edge. A ‘hurricane-proof, inside-outside village’, this multi-storey cube is another example of US functionalism, all steel girders and glass. Not to my tastes, but the restaurants within it are: the spectrum runs from casual seafood to posh Italian chops. The addition of shops, studios and a private members club complete what the developers call an ‘anti-mall experience’, pinned primarily on its impressive views of the Hudson. The best of them, of course, are on the roof, where street-food trucks are a regular fixture and concerts are angled so that the Brooklyn Bridge forms the backdrop. Diana Ross is playing at the end of the month.

Another place to benefit from NYC Ferry’s embrace is the Rockaway peninsula in Queens. A boat ride from the Wall Street terminal (Pier 11) around Brooklyn’s bum will land you in what feels much further than the 45-minute boat ride. It was here I spent an afternoon jet skiing around Jamaica Bay Wildlife Refuge. It’s a beautiful 9,000-acre stretch of islets, salt marshes and forest, and home to a purported 325 species of migratory bird. Whether you take to the throttle is between you and Mother Nature (kayaks and yawny paddle boards are also an option), but let me attest to how fun and freeing it felt to aquaplane at 55mph, while taking in surroundings entirely dissonant with the spiky metropolis yonder.

JFK airport is at the reserve’s north-east edge, and I had the breath-quickening pleasure of feeling a Boeing coming in to land directly above me – a rare occurrence apparently. Glenn, the charismatic, pony-tailed owner of Rockaway Jetski (and the attached Thai Rock Deck & Bar) takes groups out for ‘pub-lunch’ day trips to nearby Meadow Meer, which is little more than a narrow waterway with stilted houses.

As we arrived local kids were splashing around in the water. It felt more like a Louisiana bayou than a borough of New York. Over lunch, Glenn jauntily reeled off colourful anecdotes from his time as a high flier in Manhattan. He still ‘dabbles’, but now spends most of his time in this tranquil retreat. His parting gift was to tell me where his favourite bar in New York was. A trinket-teeming saloon called Sunny’s, found near the waterfront in no-subway Red Hook. Naturally, I went by ferry.

Stay with Collective Retreats from £95 per night, collectiveretreats.com

Overnight stays at Hotel on Rivington start from £261 per night ($350 USD), on a B&B basis. Visit hotelonrivington.com