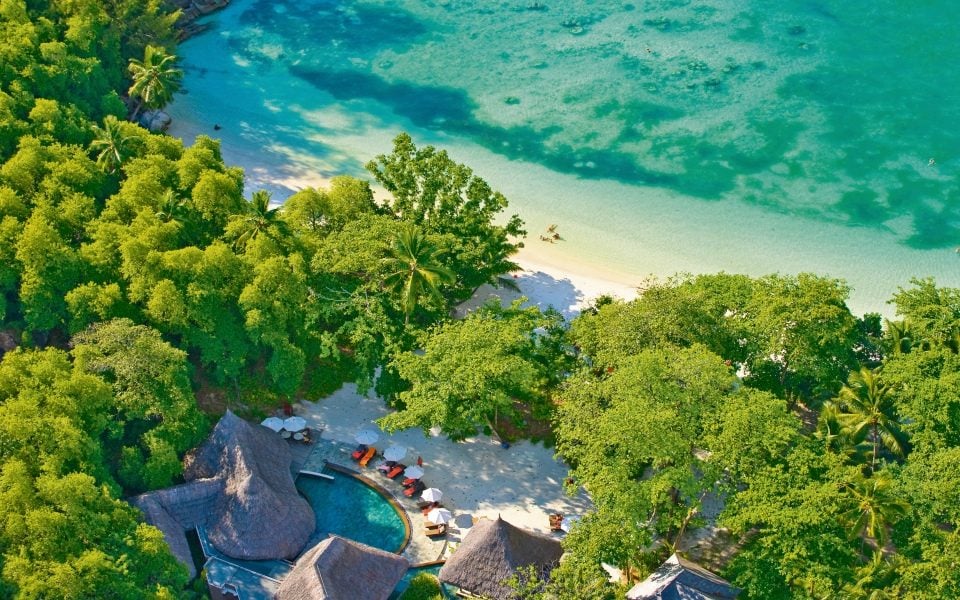 Biking around the flat sandy paths of Desroches island in the Indian Ocean, with only birds, turtles and tortoises for company, I happen across a warning sign nailed to a palm tree on the edge of the new Four Seasons resort. “Beware of falling coconuts”. Just moments later I encounter a similarly rustic sign bashed into a post in the sand. “Airstrip ahead. Look out for low-flying aircraft.” Such are the hazards of holidaying in paradise.

Thanks to the direct British Airways flights from Heathrow to Mahé (in ten and a half hours), paradise is closer than ever. Development is permitted only to the height of a palm tree, and nature-loving travellers come for the birdlife, the sealife, the uncrowded white-sand beaches, hikes in the rainforest and island-to-island sailing, whether that’s by private yacht or inter-island ferries. Leonard DiCaprio is a fan, and his conservation foundation recently lavished millions of dollars on the Seychelles to protect the marine environment, which has some of the most exciting diving in the world.

My island-hopping is by scheduled flights, which are plentiful, but not cheap. The Seychelles remains, by design, a luxury holiday destination, with the highest GDP in Africa. It’s no surprise that Will and Kate honeymooned on North Island.

I’m here to check out some of the best places to stay but also to track down the longest-living creatures on earth: the indigenous Aldabra giant tortoise, which can live for more than 200 years.

Twenty or so subspecies once inhabited this Indian Ocean archipelago, but they were easy prey for the sailors in the age of discovery, who tied them to their decks and chopped them up for food. On previous visits I've seen them in pens, but I want to see them in the wild. On Desroches, not only do the individuals wander freely, but the island naturalists collect their hatchlings to save them from the black market.

From the Four Seasons (the only resort on the island, with spacious beachfront villas and private gardens), I cycle along the coast to the tortoise sanctuary. If luxury travel means anything, it means having wildlife all to yourself, and I also roam free and explore the white sand beaches and broad-leaf forest in peace.

I hit the brakes. George is right in front of me, his telescopic neck and bright eyes searching for the contents of my picnic box. George is almost as big as my bicycle, a friendly giant. He’s grazing on the edge of the forest, heaving his mighty shell around, sprightly for his hundred-plus years. Further on in the tortoise sanctuary, the conservationists have singled out likely mates for breeding, and I spend all the time in the world taking pictures and watching them enjoying leaves for breakfast.

The Creole village is where Drilling hangs out (so called because of the drill-bit-sized holes in his shell, caused by old infections). As I come across more and more giant tortoises (one has a crater in its shell, another terrific scratch marks) I realise that, just as whale-watchers can identify humpbacks by the scars and shape of the tail, giant tortoises bare the gashes and scars of age. Living in paradise really does have its hazards.

Villas sleeping two at Four Seasons Resort Seychelles at Desroches Island start from 1,295 EUR (around £1,150) per night, half board (fourseasons.com). BA flies from London Heathrow to Mahé twice a week; returns from £654 (ba.com)

Best for birdlife
The owners of Bird Island can trace their Seychellois roots back to the Indian Ocean explorers. Opened for guests in 1973 by Guy and Marie-France Savy, the eco island is now run by their sons, Nick and Alex. It’s very much a back-to-nature experience, and not the typical luxury resort – the 24 chalets are very plain inside, and meals are at set times – yet people flock here year round for the snorkling, kayaking and swimming, for the dark skies, pristine beaches, ground-nesting birds, flocks flying overhead, and the free-roaming giant tortoises.

It’s a small island, easily explored in a day (there are no bikes or roads). I walked barefoot along the miles of white sand beach while the ocean surged and a cacophony of half a million breeding pairs of sooty terns screeched overhead. There’s no electric light, and your chalet is open to the night air. In the evening I sat on the beach watching the slow sunset as crabs raced along the sand and the sky turned to russet and gold.

Bird Island is the home of Esmeralda, said to be the largest Aldabra tortoise in the world (who turns out to be male). So many free-roaming giant tortoises are here that it would be easy to trip over them at night. Esmeralda likes to hang out on the airstrip, where there’s lots of juicy grass. If the daily flight is due, someone has to try to shoo him clear – not an easy job when you weigh 300kg.

Best for spa (and lots besides)
The beautiful private island of Felicité is within a speedboat ride of the inner islands, and home to one exclusive resort, Six Senses Zil Pasyon. It was a feat of architectural engineering (by British firm Studio RHE) because the spa of five treatment villas (plus sauna, steam, pool, deck and yoga pavilion) has been built on a secluded promontory facing out to the ocean. Each villa is unique, and each of the corresponding five “spa journeys” has been expertly created by Terre D’Afrique, whether that’s Ocean, Floating, Nature, Rock or Cave. The two-hour Cave Journey was a delicious mix of scrubs, massage, facial and rituals using crystals and singing bowls, in the privacy of the open spa villa with the sounds of the birds and the ocean blending with the music.

All accommodation villas have butlers, who take care of everything you want to see or do, such as heading out on speedboat trips to the nearby inner islands of Praslin, La Digue and the must-see conservation island of Aride, which you explore with a resident ranger.

Zil Pasyon itself has been painstakingly constructed around granitic boulders many millions of years old, forming spectacular monoliths. Six Senses commissioned the Indiana Jones of the natural world, ecologist Steve Hill, to return the resort’s flora and fauna to its natural state and it’s like a garden of Eden. No giant tortoises here yet, but work on the rest of the island’s national park is hoped for.

Six Senses Zil Pasyon villas start from €1,364 (£1,212) per night, B&B (sixsenses.com). Transfers from Mahe are by scheduled ferry via Praslin island or by chartered helicopter

Best for family activities
Constance Hotel & Resorts may have the largest resort in the Seychelles, Constance Ephelia, but it still claims some of the highest eco credentials. It was awarded Indian Ocean Leading Green Resort in 2018’s World Travel Awards for the third time.

Private transfers from Mahé airport mean getting your family to the resort is easy. Luxurious, low-rise and large means there’s plenty on offer to keep all the family entertained, yet you’re never hemmed in.

The complimentary kids club has activities for ages 4-11 while adults hit the spa, and the additional babysitting service means mum and dad can enjoy time together trying out all the classy dining options under the stars.

I tucked into flavours of southeast Asia at the toes-in-the-sand Adam and Eve restaurant, and dined like a queen on the Japanese tasting menu at Cyann, with a flight of sake.

The resort has the Seychelles’ only zip line and kids can feed the giant tortoises in their pen, but you will also want to spend time kayaking and paddleboarding around the mangroves.