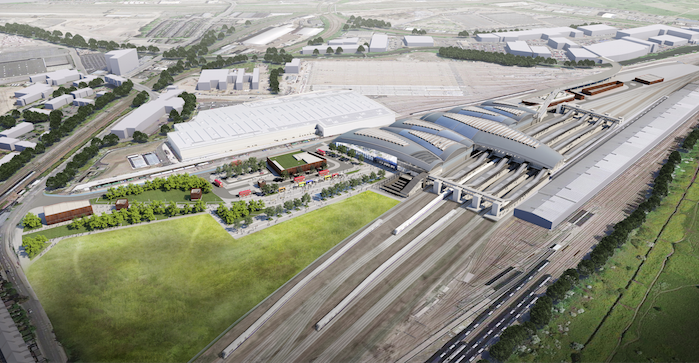 HS2 has released a batch of images showing what the Old Oak Common interchange will look like once the high speed railway opens in 2026.

HS2 says the interchange will create 65,000 jobs and 25,500 homes when it opens. It is set to become the best connected rail station in the UK, offering connections to the £17.6bn Elizabeth Line into central London and Heathrow airport, and HS2 services to the Midlands, Scotland and the north.

Matthew Botelle, HS2’s Old Oak Common project director said: “The arrival of HS2 has the potential to transform Old Oak Common, unlocking thousands of new jobs and homes around the UK’s best connected transport hub. Linking HS2 and Crossrail, our new station will be a landmark piece of architecture at the heart of the development, designed around the passenger to ensure seamless, accessible and stress-free travel.

“We want the community to be a part of the design process and we are asking for their views on the latest plans.”

HS2 Minister Nusrat Ghani added: “HS2 will be the backbone of Britain’s rail network, unlocking regeneration and economic growth across the country, while improving journeys for passengers.

“These designs show how Old Oak Common will set world-class standards for the future of stations. The task for our designers and engineers now is to take these ideas from the drawing board to reality, building an iconic station that is accessible, safe and open to all.”

The £56bn HS2 project is an intercity railway that will link London to the north in two phases and carry up to 300,000 people a day. The first phase will connect London to the West Midlands and will be completed in 2026. The second phase will link the West Midlands to Crewe by 2027 – known as Phase 2a – while Phase 2b will link Manchester in the west and Leeds in the east and will be completed by 2033.

The project has run into controversy over whether it can stick to its budget. Last month its chief executive Mark Thurston suggested fewer trains could be run at lower speeds to help keep a tab on costs, prompting leader of the Commons Andrea Leadsom to query whether there was still a "business case" for HS2.

HS2 insists it is running on time and on budget.