The stock market hates uncertainty, and there is plenty of uncertainty with respect to the tensions over the latest round of North Korean missile tests.

This post, originally published 13 September 2013, focused on the violence in the Middle East, specifically Syria, and the potential that the United States could enter the conflict and what that might mean for the markets. Given the recent actions by North Korea, CFA Institute is responding to requests from Enterprising Investor readers to provide an update.

So, is now the time to beat a hasty retreat from stocks? The answer to that is, it depends.

Let’s look at how the markets responded to the previous round of North Korean missiles test earlier this month.

“It is tempting to blame this week’s 1.1% decline in the Dow industrials on the belligerent exchanges between North Korean leader Kim Jong Un and US President Donald Trump,” Spencer Jakab wrote in the Wall Street Journal. “An analysis of 80 international incidents involving North Korea and its nuclear program since 1993 shows little connection between tensions on the Korean Peninsula and financial markets.”

Prashant S. Rao had a different spin on the matter. He looked to the global markets and saw the accelerating sell-off as the result of the escalating tensions between the two countries. “Asian stock markets closed lower and European indexes opened sharply down, on fears that the verbal back-and-forth between Washington and Pyongyang had raised the risk of actual conflict,” he wrote in the New York Times.

Lewis Krauskopf and Rodrigo Campos also claimed in Reuters that the fall in global stocks earlier this month was the result of the rising geopolitical tensions.

Wallace Witkowski and Mark Decambre observed in Market Watch that, “all three major equity benchmarks finished sharply lower on Thursday for their worst day since mid-May, with the trifecta of indexes all tumbling for a third straight session for the first time since mid-April, amid a persistent war of words between the U.S. and North Korea.”

With repeated tweets by President Donald Trump vowing to “rain fire and fury like the world has never seen” down on North Korea if it threatened the United States, and that “military solutions are now fully in place, locked and loaded, should North Korea act unwisely,” is it any wonder markets are jittery?

So how have historical capital markets performed during times of war?

We looked at returns and volatility leading up to and during World War II, the Korean War, the Vietnam War, and the Gulf War. We opted to exclude the Iraq War from this group, as the Iraq War included a major economic boom, and subsequent bust, that had very little to do with the nation’s involvement in a war.

As the table below shows, war does not necessarily imply lacklustre returns for domestic stocks. Quite the contrary, stocks have outperformed their long-term averages during wars. On the other hand, bonds, usually a safe harbour during tumultuous times, have performed below their historic averages during periods of war. 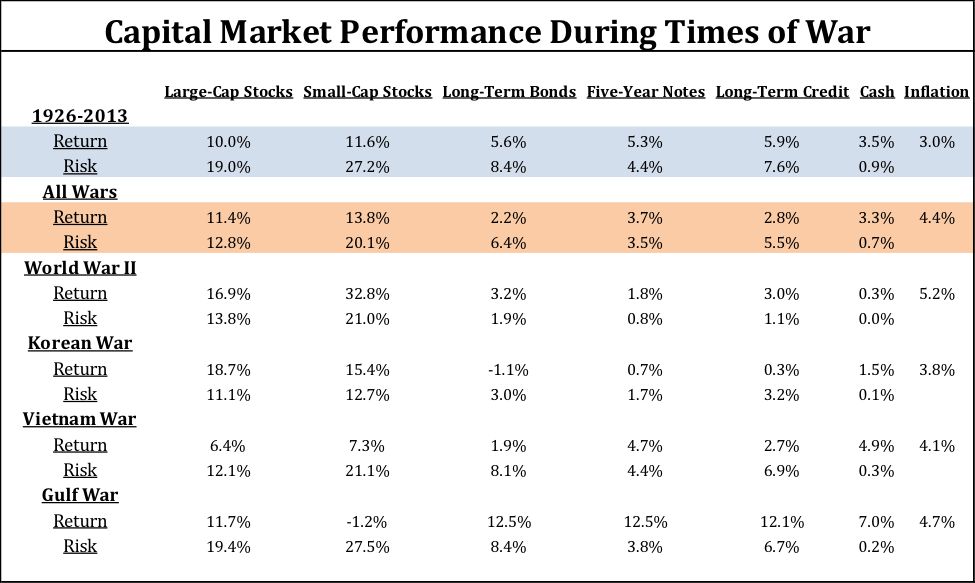 Sources: The indices used for each asset class are as follows: the S&P; 500 Index for large-Cap stocks; CRSP Deciles 6-10 for small-cap stocks; long-term US government bonds for long-term bonds; five-year US Treasury notes for five-year notes; long-term US corporate bonds for long-term credit; one-month Treasury bills for cash; and the Consumer Price Index for inflation. All index returns are total returns for that index. Returns for a war-time period are calculated as the returns of the index four months before the war and during the entire war itself. Returns for “All Wars” are the annualised geometric return of the index over all “war-time periods.” Risk is the annualised standard deviation of the index over the given period. Past performance is not indicative of future results.

The full period of study, 1926 through July 2013 is shaded in blue and provides a “control” group for comparison. Periods of war are highlighted in red. All of the individual wars we considered are listed below. Interestingly, both large-cap and small-cap stocks outperformed with less volatility during war times. The Vietnam War was the one exception, where stock returns were worse than the full period average. Even then, though, the returns were positive and above those of bonds and cash.

It is interesting to note that stock market volatility was lower during periods of war. Intuitively, one would expect the uncertainty of the geopolitical environment to spill over into the stock market. However, that has not been the case, except during the Gulf War when volatility was roughly in line with the historical average.

Capital market returns during the Gulf War were different from other wars. This war was very short, spanning less than a full year. This period also coincided with an oil price spike that helped push the economy into a brief recession. The idea of recession during war time was fairly new, and reflected the changing US economy. During previous wars, the economy was more exposed to capital goods and natural resources, which experienced greater demand to feed the war. However, by the 1990s, the economy had shifted away from heavy industry and toward the current “knowledge-based” economy. Thus, military demand had less of an impact, for better or worse, on economic growth.

Bonds generally underperformed their historical average during periods of war. This is likely, at least in part, because inflation has been higher during war times. Bond returns have historically been negatively correlated with inflation. Another explanation is that governments borrow more during wars, thus driving bond yields up and bond prices down. With the higher inflation and increased government borrowing associated with war time, investors seeking safety may want to think twice before shifting assets from stocks to bonds.

There are many economic and fundamental factors that impact security prices. Occasionally, a single event is powerful enough to dominate these other factors to singly influence capital market returns. However, historically speaking, this has not been the case with wars.

“None of this means that what happens in Northeast Asia is irrelevant. The threat of conflict there is real, and it is hard to imagine even in the current buy-the-dip market that outright military confrontation would be very good for stocks and corporate bonds that already are widely perceived to be richly priced,” Jakab concluded. “For now, the current dispute — despite its unusually strident tone from the U.S. side — remains one of words. . .. Something, some day, will end the current bull market, but mere words from North Korea probably won’t suffice.”

Economic growth, earnings, valuation, interest rates, inflation, and a host of other factors will ultimately decide the future direction of the stock and bond markets. While a knee-jerk decline is possible if war breaks out between the United States and North Korea, history suggests that any market decline should be short-lived.

If you liked this post, read more from the Enterprising Investor.