Greece is the word for luxury villas abroad 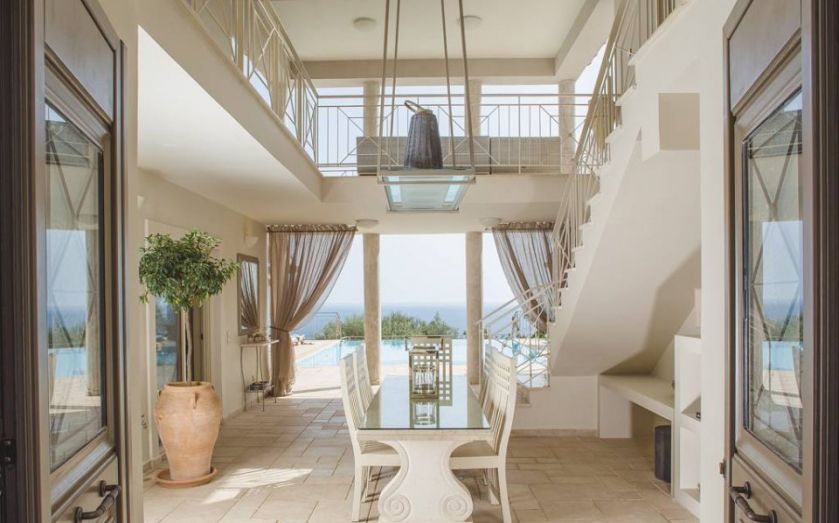 Holidays in Greece generally fill three niches; historical, package and, recently, luxury resorts, such as Mykonos and Santorini. Meanwhile, quietly going about its business providing a happy medium is Kefalonia. Despite being the largest of the Ionian Islands, its population remains a modest 35,000. Its lushness is ensured by the heavy rainfall during the winter months and, subsequently, the produce is fantastic.
Famed as the location of Captain Corelli’s Mandolin, once the impetus of the film’s success abated, tourism plateaued. But the island has seen a recent resurgence, thanks largely to the Koumoudos family, spearheaded by patriarch, Dennis. I met with Dennis and his wife, Suzanne, owners of Unique Villas, in the non-descript – nay basic – Givras Bros restaurant run by three brothers, grandsons of the original owners, as is the way in Kefalonia.
Over a fresh Greek salad, Dennis explains how he returned to Kefalonia in 1993, after the collapse of his business in South Africa owing to the political climate. He went from having virtually nothing to managing 150 properties – 20 of which they own, including a beach-located hotel, currently undergoing a transformation into a boutique gem.
Passionate about his hometown, Dennis believes its growing popularity is down to its low crime rate and small population. He got into the property business by accident, starting out by advising friends on builders, finding land and dealing with legalities. He proved so adept at it that when they were looking to rent out their villas, he realized he might as well monetize his unofficial consultancy firm under the name Unique Villas Kefalonia.
Soon, holiday operator Thomson came knocking, looking to grow its holiday programme in the east Mediterranean. Using these funds, the Koumoudos expanded, offering people with land half of the money upfront, allowing them to build with minimal risk. “It wasn’t only locals,” says Dennis, “There were also British coming in, and I gave them the incentive that I’d guide, build and rent for them.”
The Koumoudos thought about expanding throughout Greece, but Dennis realised the quality of the product could be impaired: “We’re Kefalonia specialists, so we should stick to that. We don’t want crazy growth, but controlled growth because we want to deliver the services.” It’s the personal touch – from being met at the airport by a concierge armed with iced water; to arriving at the villa – luxurious flagship property, Zeus – with the oven on, awaiting the freshly made moussaka, courtesy of the private chef – that ensures the Unique brand, remains just that.
Land remains a stable investment, and the rental market during the holiday season provides a steady income. All buyers need to do is choose a plot of land and the completed villa, with pool, outside gym and any other mod cons you so desire, can be delivered within six months. Or, you could do what Shaun of the Dead actor Simon Pegg did; buy a plot of land and take your time creating your dream home away from home.
During September and October, classic villas start from €1,000 per week; new luxury villas from €1,500 per villa per week. In July and August, the new villas start from €2,000 per villa per week. Visit
uniquevillaskefalonia.co.uk.
Share:
Tags: Property Archive