Furious UEFA warns clubs: Join European Super League and we will ban you and your players 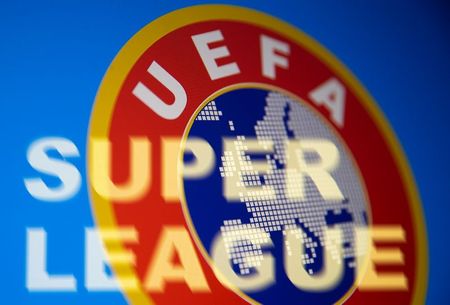 UEFA president Aleksander Ceferin has warned the football body is working to ban breakaway European Super League clubs and their players from its competitions “as soon as possible” and urged domestic leagues to follow suit.

Twelve clubs, including the Premier League’s so-called ‘big six’, are part of plans which would fundamentally alter the shape of European football.

This was supposed to be the day where the spotlight was on UEFA’s plans to revamp its competitions from 2024, but instead Ceferin faced questions last night about the impact of a different event entirely, one which he described as “a spit in the face” of football lovers.

He was visibly angered at the conduct of some of the leading orchestrators of the breakaway, including Manchester United executive vice-chairman Ed Woodward and Juventus chairman Andrea Agnelli, describing them as “greedy” and adding: “They don’t know s*** about solidarity.”

It is understood the Premier League has called its other 14 clubs to an emergency shareholders’ meeting on Tuesday morning, to which the ‘big six’ – Arsenal, Chelsea, Liverpool, Manchester City, Manchester United and Tottenham – have not been invited.

It will be a chance for the clubs to consider what happens next. Culture Secretary Oliver Dowden told the House of Commons that the Premier League and the Football Association were “considering a wide range of sanctions”.

He warned the Government stood ready to do “whatever it takes” to prevent the clubs from breaking away if the actions of the football authorities prove insufficient.

Ceferin and the rest of the UEFA hierarchy is still seeking legal advice on the steps it could take to sanction the “dirty dozen” – as he called them at one point – and said it was still too early to say when they would know what form the sanctions could take.

But he said: “We will take all the sanctions that we can and we will inform you as soon as we have a clear answer about it, but my opinion is that (we must do that) as soon as possible. They have to be banned from all our competitions and the players from our competitions.”

However, in an interview with Spanish TV, Super League chairman Florentino Perez was vehement that expulsion from the Champions League would not happen.

“It will not happen, the law protects us,” he said. “We will not get into legal issues. It is impossible.”

There remains the possibility of players belonging to those 12 clubs being banned from Euro 2020.

Ceferin said there was still a way back for the clubs, but vowed he would “never” agree to a deal where the Champions League fed into the Super League.

“I didn’t say they’re not allowed to come and talk, that they are banned from European football forever or something like that,” he said.

“It’s nothing personal here, maybe with Agnelli it’s a bit personal because I know him more. But for the rest I don’t want them to come begging us to take them back – I just want them to respect us.”

Ceferin was openly disgusted at how Agnelli had handled himself. The Italian had been a UEFA executive committee member and the chairman of the European Club Association, with whom UEFA had been negotiating and consulting.

“He’s probably the biggest disappointment of all,” he said. “I’ve never seen a person that would lie so many times, so persistently as he did.

“I spoke with him on Saturday afternoon, he said ‘these are all only rumours. Don’t worry, nothing is going on’. And then he said, ‘I’ll call you in one hour’. And he turned off the phone,” Ceferin revealed.

“The chairman of an organisation with 247 clubs ran away from the same organisation. I mean, I’ve never seen anything like that in my life,” he added.

On United chief Woodward, Ceferin said: “I didn’t have much contact with him but he called me last Thursday evening, saying that he’s very satisfied with the reforms, that he fully supports the reforms, and that the only thing he would like to speak is about financial fair play. And obviously he already signed something else.”

The board of the ECA, from which the 12 clubs resigned on Sunday night, met on Monday needing to fill key positions, not least replacing former chairman Agnelli.

Additionally, Bayern chief executive Karl-Heinz Rummenigge was nominated to replace Agnelli as one of the ECA’s two representatives on UEFA’s executive committee.

Rummenigge earlier said his club were opposed to the plans and added: “I don’t think the Super League will solve the European clubs’ financial problems caused by coronavirus.

“Rather, all clubs in Europe should work in solidarity to ensure that the cost structure, in particular the players’ salaries and the fees for the consultants, are adjusted in order to make European football more rational.”

Monday began with the news that the Super League had written to UEFA and FIFA to inform them that they had filed court motions to protect itself against any punitive measures the governing bodies might impose.

Ceferin said: “They sent a letter asking for urgent meeting but I don’t think is so urgent. I got a letter from the so-called Super League, signed by I don’t know who, because it was without a name. Probably a Super person.”

“They care about their pockets. They care to be famous, but they will be famous in the wrong way.”

FIFA has already come out in opposition to the plans, and asked whether he could trust FIFA president Gianni Infantino, having been let down by so many others, Ceferin added: “He will come [today] to the UEFA Congress and he said to me personally that he is against the Super League, and that he will say that publicly [today].”

“He says that he fully supports us and that he will strongly condemn this project.”

The decision to go public on the Super League followed a disagreement among some clubs over the level of commercial control they would have over the new-look Champions League.

Ceferin insisted UEFA would always have the majority share over such a venture.

Responses in the UK

British Prime Minister Boris Johnson has condemned the plans for the breakaway league.

Broadcaster Sky Sports said it had “not been involved in any discussions” with the proposed Super League.

It said in a statement: “In the last 24 hours Sky Sports has passionately articulated the views of football fans on the importance of preserving and sustaining the whole football pyramid.

“We are completely focused on supporting our long-term football partners in the UK and in Europe, already providing fans with the best live action from the best football competitions in the world, and we have not been involved in any discussions with the proposed breakaway European Super League.”

BT Sport, UK broadcaster of the Premier League and Champions League, said in a statement: “BT recognises the concerns raised by many of football’s leading voices and fans and believes the formation of a European Super League could have a damaging effect to the long term health of football in this country.”

The broadcaster, a Premier League rights holder, would expect all contracts to be rewritten in the event of a Super League going ahead, the source said, which would have a negative impact for the English top flight’s breakaway big six as well as the rest of the league.

The source also warned that the closed nature of the Super League – with the same teams going up against each other year in and year out without the threat of relegation – may not be an attractive option to broadcasters.

The British Government has brought forward its fan-led review of football governance as a result of the Super League developments. It will be led by former sports minister Tracey Crouch.

The news even drew a reaction from the Royal family, with the Duke of Cambridge – who is the president of the FA – tweeting: “Now, more than ever, we must protect the entire football community – from the top level to the grassroots – and the values of competition and fairness at its core.”

A YouGov poll of 1,730 football fans found 79 per cent opposed the idea of a Super League. Sixty-eight per cent of the survey group said they strongly opposed it, while three quarters had limited or no interest in watching such a competition.