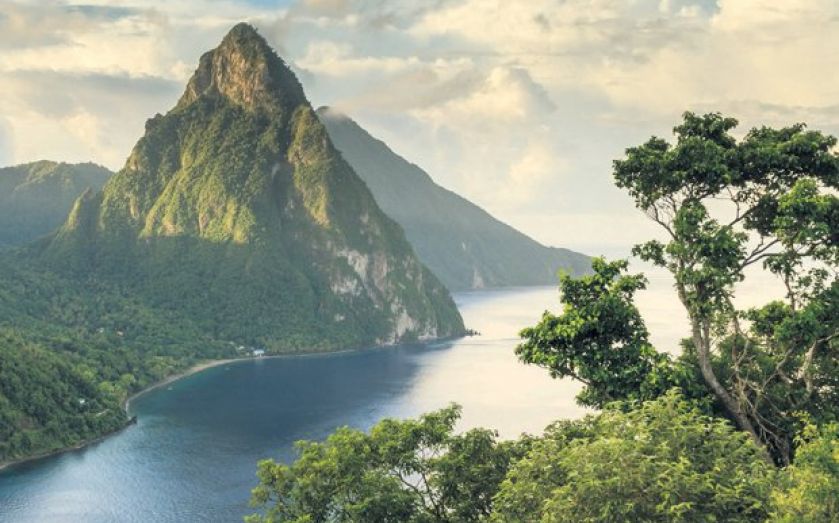 WHAT connects Superman, Amy Winehouse, Oprah Winfrey, Blackbeard and Napoléon Bonaparte? No, it’s not my ultimate dinner party guest list – although that would be some karaoke line up. The link is that they have all been head-over-heels seduced by Saint Lucia. If it’s good enough for this venerated bunch then what hope do we mere mortals have of resisting the tiny West Indian island’s allure?

Joshing aside, while Saint Lucia – armed with exotic charm, azure waters, lush vegetation, cream sands, postcard sunsets, Coco Loco cocktails, and other Caribbean clichés – would understandably make the top three of most honeymooners’ dream lists, dig a little deeper and you will discover a beguiling country, packed to the gills with sea-salted tales of colonial tussles, unique adventures and unexpected treasures.

Few bother to delve beneath the superficial tranquility. They’re happy to luxuriate – sozzled under their palm tree slurping mini-umbrella adorned drinks and submerging for the occasional snorkelling trip – and that’s fair enough; you have some of the most desirous places on the planet here, such as the breath-taking Jade Mountain resort (complete with personal butlers, open-to-the-elements “sanctuaries” and infinity pools), where I stayed.

But exploring Saint Lucia’s history and identifying the juxtaposition between the paradisal resorts and harsh reality of local life – and the dependence on the tourist trade – is fascinating and more rewarding than a tan.

Nicknamed “Helen of the West Indies”, Saint Lucia’s beautiful assets – as with the Trojan original – have long been lusted over and fought for. The French first laid claim in 1635, with the British in their wake. As the original pirate of the Caribbean, Edward “Blackbeard” Teach, stored his looted treasure in the north of Saint Lucia. Ownership transferred between the two powers 14 times before the British ultimately wrested control in 1814, towards the conclusion of the Napoleonic Wars.

Bonaparte’s wife, the first Empress of France Joséphine de Beauharnais, hailed from Soufrière Bay, which provides an awesome vista of the Pitons on the west coast of Saint Lucia and is close to where Jade Mountain – a resort for the stars, and where the late Winehouse lounged by the pool – is perched. In a desperate bid to retain possession of the island – and a cluster of other highly profitable sugar-growing Caribbean countries – the French even offered up their vast Canadian territories.

The British declined, and ran Saint Lucia as a colony until the island won independence in 1979. After leaving the Commonwealth market, banana and cocoa sales quickly plummeted and, by 1996, tourism – somewhat inevitably – had overtaken them to become the country’s biggest earner. Unsurprisingly, foreign hoteliers have been quick to develop a slick service, replete with daily snorkelling and evening steel-drums.

Only 24-miles long and seven-miles wide, with a population of 176,000 (at the last count in 2011), 70 per cent of the country is wild rainforest jungle, undeveloped and unpredictable, and to the heat-seeking Westerner, Saint Lucia remains a magical destination. In 2012 Brits and Americans – some of whom can reach the island on a three and a half hour flight – made up 25 and 38 per cent of tourists respectively. Even Hurricane Tomas, which ripped through the island in 2010, killing 14, has deterred few from visiting.

American talk-show queen Oprah helped matters by announcing the iconic Pitons – two sheer volcanic plugs that dramatically emerge from the Caribbean Sea, depicted on the Saint Lucian national flag – to be “one of the top five places to see before you leave this great place called earth”.

And that cheery comment came after Clark Kent’s Lycra-wearing alias swooped between the Pitons, down to Diamond Falls to pluck a bunch of bird-of-paradise flowers for his beau, Lois Lane, in the 1980 film Superman II. Additionally, in 2004, UNESCO made the Gros and Petit Pitons, and the surrounding area, a World Heritage Site, further boosting tourism.

Those of an intrepid disposition can – with the aid of a local guide – scramble two miles up, around ancient mango trees, hummingbirds and over boulders, to the summit of the stout Gros Piton, which at 771 metres is 28 metres higher than its sibling.

It took me three hours to scale and descend, and, had Oprah reached the top, she would surely have raved about the thrilling views, showing from above the lush rainforest interior with its white sand-fringed edges.

“This season, in 2013, we are on course to break the 2009 record in terms of numbers,” enthused John Emmanuel of Saint Lucia Tourist Board when I visited in March. “We attract people because we are welcoming and warm, naturally smiling. There are so many natural wonders to experience and culture to get stuck into.”

The oeuvre of the country’s most-famous living son, poet Derek Walcott, centres on Saint Lucia’s fractious history and the uncomfortable ménage à trois between foreign investors, capricious politicians, and the locals caught in the middle.

Walcott – the so-called “Homer of the Caribbean” after his West Indian Odyssey, Omeros, which won him the Nobel Prize for Literature in 1992 – has long been the loudest and proudest voice defending Saint Lucia’s core values.

For instance his first recognised poem, Prelude, written in his mid teens and published in 1948, spoke of “my prone island”. He wrote: “The steamers which divide horizons prove/ Us lost;/ Found only In tourist booklets, behind ardent binoculars;/ Found in the blue reflection of eyes/ That have known cities and think us happy here.”

A couple of days earlier, resort guide Meno, who claims to have climbed the Pitons hundreds of times in his jelly shoes, took me on a trail from the beach at nearby Anse Mamin, through the grounds of an old, tropical plantation.

There he pointed out birds and wildlife, along with turmeric, cashews, mango, guavas, papaya, coconut, breadfruit, yams and sweet potatoes, and spoke with noticeable gusto about the Slavery Abolition Act in 1833, which sparked wild celebration in Saint Lucia.

At Laborie we witnessed true Saint Lucia, away from the sanitised resorts, where young children – with ribbons in their braids – and adults sang anti-government calypsos in creole, played music and twirled impressively on stilts as part of an organised concert. It showed their proud independence and heritage, especially the African tribe-like dances, which some fear could be dying out.

It’s a world away from the glamour of the resorts but it’s a beautiful, immediate part of St Lucian life; a trip here without experiencing it would be a gigantic missed opportunity.

OFF THE BEATEN TRACK
1 Every Friday in St Lucia, Gros Islet street parties bring the city to a halt, shutting down the roads until the early hours of Saturday morning. Along the street, ten foot speakers blast festive music and locals serve up classic cuisine out of small tents.

2 A fun alternative to a car or taxi is renting a bike. A bike not only gives you a chance to get to know the city, but you can ride it through St Lucia’s jungle. The views and the personal satisfaction are worth the challenge.

3 Or if bikes are not your thing, rent a horse. Many venues, including Island Riders, allow you to go horseback riding along the water and even take your horse for a paddle on the beach. For a price, locals offer refreshments like fresh coconut water along the beach.

4 Locals of the island come to the Castries Market to get fresh produce, in the same fashion as travellers. At the market, you can find anything from fresh coconuts, handmade baskets, to small knick knacks and souvenirs.

5 It should come as no surprise that Boucan restaurant, found within Hotel Chocolat, is famous for incorporating coca into every dish it serves, for all courses, not just dessert. The menu also features a range of decadent chocolate cocktails, including a variety of chocolate daiquiris.

6 Anse-la-Raye’s “Fish Friday” is a highly recommended fish fry; although, there are locations across the island that host something similar. Here, locals fry their latest catch, including lobster, shrimp, conch, and loads of fish.

7 Almost everyone who visits a tropical island plans on doing some snorkeling during their visit. St Lucia is no exception. However, another treat that many tourists may miss out on is St Lucia’s bat cave, home to thousands of… well bats, of course.

8 Sulphur Springs is a definite tourist attraction but it is also the only drive in volcano in the world. The volcano, which is predicted to erupt again at some point in the future, can be toured individually or with a guide. You can also take a mud, sulphur and zinc baths.

9 The Pitons are one the most iconic symbols of St Lucia. There are several options to view the two volcanos. You can take the climb to view from afar, a water taxi or a guided van tour. Additionally, you can book a helicopter ride to view the entire island.

10 If the Pitons are not enough to satisfy your hiking cravings, try Mount Gimie, the highest point in St Lucia. While this is not a trip for the faint of heart, the view is rewarding. The climb has been described as one of, if not the most difficult on the island.

Need to know: JADE MOUNTAIN AND ANSE CHASTANET
Nightly rates at Jade Mountain start at $1,275 per Sanctuary. Price is based on two persons sharing a Sky, Star, Moon, Sun or Galaxy Jacuzzi Suite. Nightly rates at Anse Chastanet start from $330 per night in a Standard Room based on two sharing. All rates are subject to 8 per cent tax and 10 per cent service charges.