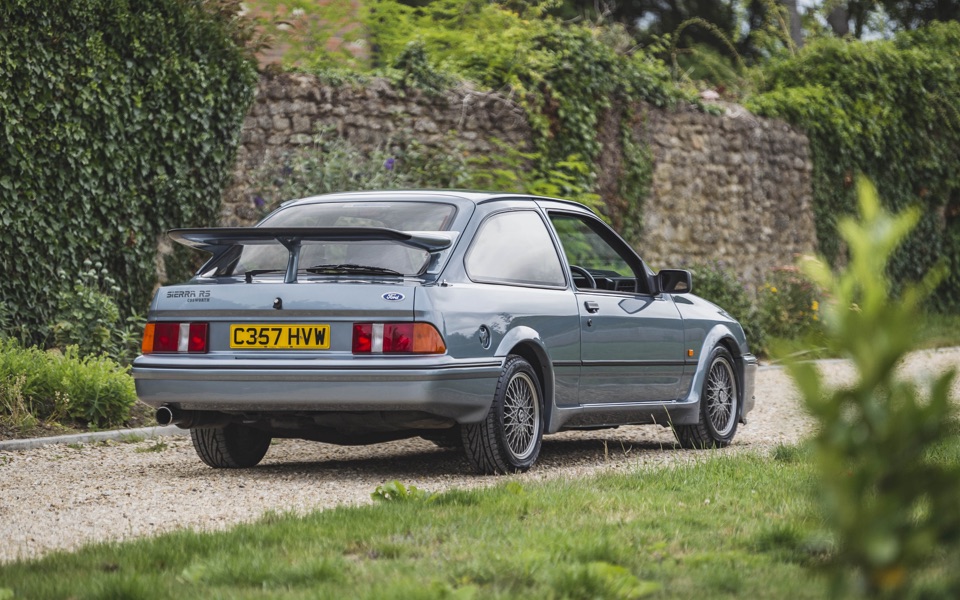 “A working class hero is something to be,” declared John Lennon. Anyone who grew up idolising the Ford Sierra RS Cosworth would surely agree.

With its wide wheelarches and whale tail wing, the ‘Cossie’ looked brilliant on a bedroom wall. And its 204hp turbocharged engine offered Porsche-baiting pace: 0-62mph in 6.5 seconds and a top speed of 149mph.

Today, this iconic fast Ford is highly collectable – and a rare pre-production car is coming up for sale. If you have between £39,000 and £59,000 to spend, it could prove a savvy investment.

This 1985 Sierra RS Cosworth was initially part of Ford’s ‘4P’ Pre-Production Prove Out Programme. It’s one of 10 such cars built, used for development and press road-testing.

Seven of the 10 were later converted to rally cars, which makes this road-registered example a real rarity. Indeed, it’s the only pre-production RS Cosworth known to survive, its provenance verified by members of the original Ford Special Vehicle Engineering (SVE) team.

There’s also a suggestion the Sierra starred in Ford’s ‘Cars of the Future’ TV advert at the time, although it isn’t possible to prove this.

The car has covered 68,000 miles from new and spent much of its later life in air-conditioned storage. It was recently restored at a cost of ‘tens of thousands of pounds’.

The goal of the restoration was to return the Ford to as-new condition. Outside, it wears original Moonstone Blue paintwork, with replacement lights, plastic mouldings, door and window seals, and a new front splitter.

Inside, there’s new headlining and restuffed front seats, along with the original three-spoke steering wheel and Ford radio/cassette.

Classic car purists will gleefully note the original UK registration number (returned when the car was repatriated from New Zealand), owner’s handbook and dealer sticker in the rear window.

The sale also includes an MOT certificate valid until June 2021. So you can start driving it straight away.

We sampled a Sierra RS Cosworth from Ford’s heritage fleet back in 2016. Here’s an excerpt from our review, giving a flavour of how the car drives:

‘Two hundred and four horses was an enviable stable in 1986, but even a Fiesta ST200 tops that today. The Sierra’s closest descendant, the Mk3 Focus RS, has 350hp.

‘Even so, floor the right pedal and the winged warrior still feels quick, its raucous four-pot rasping as the rear tyres break traction on damp Dagenham roads. The gearshift is a little rubbery, the steering slightly slow-witted, but there’s no shortage of feedback.

‘Find a quiet B-road (or an empty McDonalds car park) and the Sierra is more than happy to go sideways. Yet it’s less intimidating than I expected, despite the total lack of electronic traction aids. Don’t expect the scalpel-sharp precision of an E30 M3, but the Cosworth isn’t the blunt instrument its Essex-boy image might suggest.’

If you’re interested in bidding on the Cosworth, visit TheMarket.co.uk, where the online auction starts on 23 July, ending on 30 July.

“This car is a piece of Ford history. Not only is this one of the most desirable fast-Fords made but this is one of the very first examples ever built,” says Tristan Judge, director of The Market.

“The auction will be a very special opportunity for enthusiasts and collectors looking for a genuine Sierra RS Cosworth, with a price tag which is within reach for serious buyers.”

This working-class hero is unlikely to sell for a working-class price. But if you can afford it, few modern classics have such universal appeal.