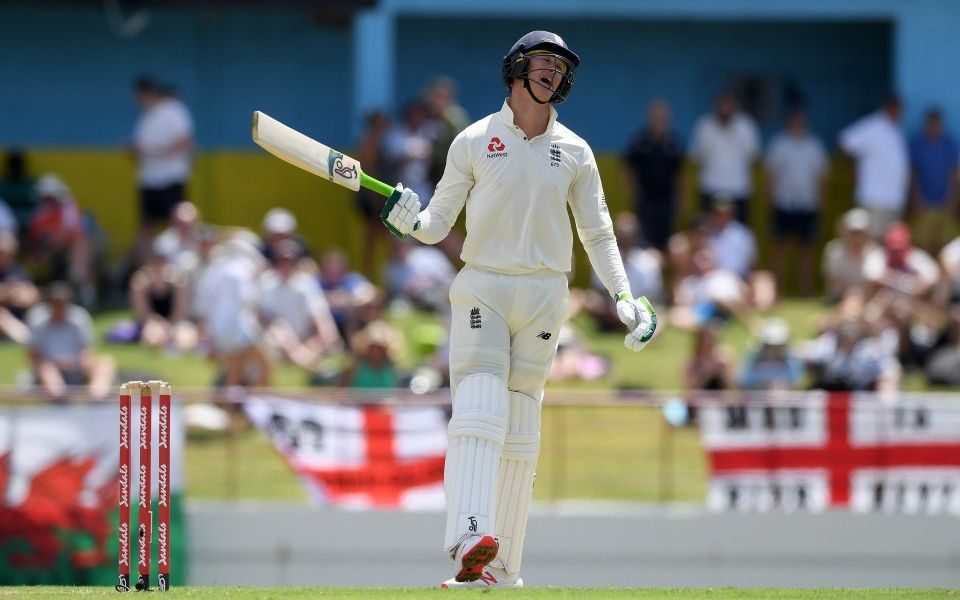 Only one Test match now stands between England and the start of this summer’s Ashes. Despite having just spent the last three weeks playing that very format in the Caribbean, they are no closer to solving their perennial problem.

The phrase “first name on the team sheet” is a common one in sport; right now England don’t know who their first three names are.

Top-order batting has plagued England selectors ever since Andrew Strauss retired in August 2012. The revolving position alongside Alastair Cook then turned into two problem positions when he called time on his record-breaking career in September.

With captain Joe Root sticking at No4 it’s now a case of the top three positions being up for grabs. What England would give for the rock solid Cook-Strauss-Trott combination of yesteryear.

England may have concluded the Test leg of their tour of the West Indies with a much-needed 232-run win in St Lucia on Tuesday, which contained a much-needed century for Root and an exhilarating five-wicket burst from Mark Wood, but their most pressing concern remains.

None of Rory Burns, Keaton Jennings or Joe Denly have done enough to conclusively secure a place and, with just the Lord’s Test against Ireland at the end of July before the Ashes comes around in August, the time for auditions is over.

England’s most inexperienced top three since 1989, with 22 caps between them, looks certain to be a one-off occurrence.

Surrey captain Burns hasn’t made the most of his opportunity and averages 25 after six Tests in Sri Lanka and the Caribbean. His 84 in the second innings in Barbados showed his temperament and potential, while he’s generally looked the part in between finding strange ways to get out.

Jennings, meanwhile, has surely come to the end of the road. The gangly left-hander returned in St Lucia after being dropped for Antigua and confounded exactly none of his critics with scores of eight and 23. His sluggish footwork and fondness of the slip cordon make him a sitting duck.

Denly, who was mercifully dropped down to No3 to accommodate Jennings, made 20 and 69 to leave selectors in a difficult position. The Kent man’s innings were far from chanceless but his flowing cover drives and straight pushes hinted at his potential. Having played just two Tests it’s likely he’ll be afforded more time.

Strangely for a man eager to prove his Test worth, Denly will head off to the Indian Premier League next month to join up with Kolkata Knight Riders, minimising his red-ball practice.

Top-order batting is the most difficult trade in cricket and it’s never been more difficult, with worldwide averages in the midst of a trough. But that backdrop doesn’t alter the fact that with five months to go England need to identify the best people to face Mitchell Starc, Josh Hazlewood and Pat Cummins.

The barrel has already been scraped; since June 2014, 11 of the last 26 debuts have been handed to players in the top three positions. Young talents, old pros, blockers, attackers, left-handers and right-handers have been tried. So what’s next?

Jason Roy will primarily be focused on the upcoming World Cup, but played for England Lions over the winter and has made no secret of his Test ambitions. He is certainly on the radar, but a perception of white-ball speciality may be hard to shift.

Of the many to have been given chances over the past few years, not all have burnt their bridges. Early season runs still catch eyes and the likes of James Vince, Ben Duckett, Haseeb Hameed and Adam Lyth could come back.

Middlesex’s Nick Gubbins and Max Holden are well thought of, while Cook’s opening partner at Essex, Nick Browne, has the attributes to step up a level.

Then we have those who consistently score bucket-loads of runs in the County Championship but have never been considered. Somerset’s James Hildreth, 34, and Worcestershire’s Daryl Mitchell, 35, will always have their advocates but it’s hard to see their dreams becoming reality, while the same goes for a return to the side for Ian Bell, 36, after a four-year absence.

The truth is nobody, probably not even selector Ed Smith, knows who, if anyone, will be presented with cap No691 this summer. An unpredictable five months awaits.