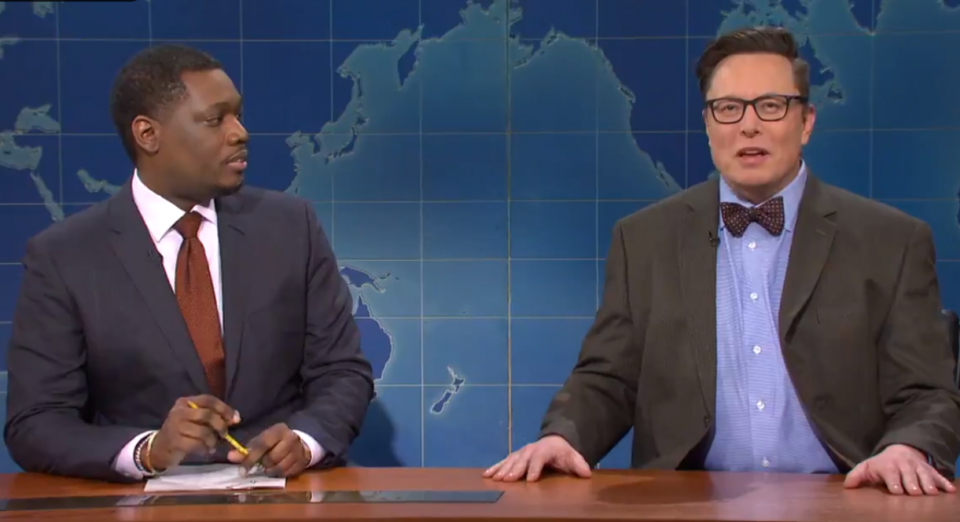 The Tesla CEO – and self-proclaimed “Dogefather” – made his presenting bow to an expectant crypto following who had been buying up Doge in anticipation of the entrepreneur promoting it during the broadcast.

And the 49-year-old South African didn’t disappoint. He even squeezed in a comedy sketch with his co-presenters jokingly attempting to explain what the meme coin was, ending the skit shouting “to the moon!”.

The moon, however, appeared far from the thoughts of many Dogecoin holders as investors clearly felt the joke coin had peaked with the TV appearance.

Musk’s questionable financial push triggered a selloff, and Dogecoin plummeted from $0.70 as the show began to a staggering $0.51 by the time the final credits were rolling.

The portents were already there for any keen-eyed market watcher as, hours before the programme aired, Doge’s lofty heights of $0.73 lost altitude and dropped to around $0.63 as large investors clearly wanted to hedge their bets.

It was an obvious attempt to cover all bases by selling off half of their Doge assets ahead of the show – in case Musk didn’t give it a mention – but keep the remaining assets on simmer to see what response any nod might produce.

Clearly, though, many investors have seen Doge as a short-term opportunity to make a quick buck and cash out on a high. After all, prior to Elon Musk’s continued and shameless plugging of the crypto – largely constrained to his Twitter account prior to Saturday Night Live – was changing hands for a measly $0.04 a pop.

Anyone who snapped up a decent bagful of Doge earlier this year will now be enjoying a handsome profit – as is reflected in the current sell-off.

This whole business does, however, raise serious questions about Musk’s sustained promotion of crypto. He has already been warned about elevating the price of Bitcoin with his tweets.

Furthermore, with computing legend John McAfee currently sweating it out in a Spanish prison as he awaits extradition to the US for various charges – including promoting cryptocurrencies via his Twitter account – it seems almost implausible to many observers how Elon Musk is apparently allowed free rein to do the same.

Musk’s appearance and comedy Doge sketches on Saturday Night Live must have been a bitter pill to swallow for McAfee and his devoted wife Janice who face uncertainty at their fate near Barcelona where the 75-year-old has been held for almost seven months.

READ MORE: John McAfee on life in prison and the price of Dogecoin

Musk’s brazen promotion of cryptocurrency will, no doubt, come under the spotlight again this week as it is shoved under the noses of the Securities and Exchange Commission. The financial regulatory body has, thus far, done very little other than keep an eye on the billionaire’s tweets. Whether or not escalating those one-liners from social media onto a huge televised platform will trigger them into action remains to be seen.

So too does the fate of Dogecoin itself.

Started seven years ago “for a joke”, the digital asset now finds itself in a very strange place. Looking at the charts from the last few hours it seems clear that many investors have viewed it as a transparent ruse to make quick cash and are now happy to see it cast onto the growing rubbish heap of spent projects.

Many more though, appear to be viewing it as a long-term investment that may indeed flop back to the lows where it resided for much of its life, just waiting for another wealthy prince to give the sleeping beauty a magic kiss.