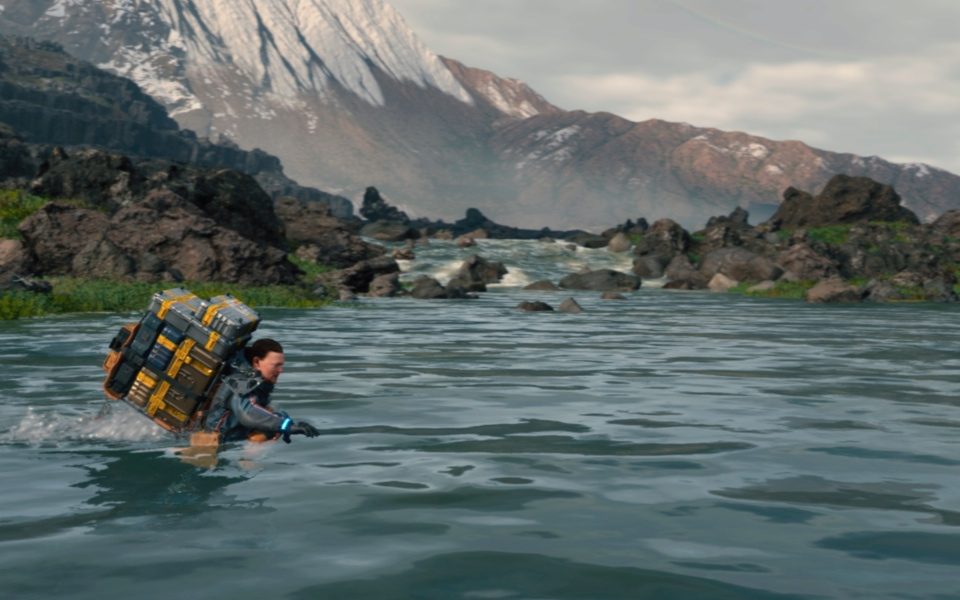 There’s an entire genre of games disparagingly referred to as “walking simulators”. In most of them, walking is simulated in only the most rudimentary of ways – you tend to glide about the place, looking at sunsets and picking up fruit.

Japanese auteur Hideo Kojima has created a true walking simulator, a game in which the primary objective is to place one foot in front of the other without falling over. Death Stranding follows Sam Bridges, a deliveryman quietly navigating the antediluvian wasteland of a fallen America.

A catastrophic event has breached the membrane between this world and the next, allowing passage to an endless ashen “Beach”, a place filled with Lovecraftian horrors and rotting shellfish. Time is all messed up – rain now ages people – and corpses cause city-levelling explosions. It’s a lot.

Imagine walking down the road and seeing a postman drop all his letters. Imagine how sad that would be. Now imagine you’re the postman. That’s Death Stranding.

Thankfully, you don’t have time to dwell on it, because you have work to do. You’re essentially an Amazon courier, mooching across the continent delivering parcels. And just like real life, those parcels are often knackered by the time they arrive. An obscene amount of money – $80m can’t be far off the mark – has been spent proving the conventional wisdom that walking up muddy hills in the rain is hard.

You might spend minutes carefully negotiating a rocky path, using the left and right triggers to balance the weight of your enormous rucksack, only to trip at the top and watch your packages tumble back down. Or you might be wading through a river when an unexpected current sweeps you off your feet, sending your precious parcels – an old man’s medicine, a craftsman’s beloved tools – floating off into the distance while you struggle to stay afloat.

Imagine walking down the road and seeing a postman drop all his letters. Imagine how sad that would be. Now imagine you’re the postman. That’s Death Stranding.

Did I mention you have a baby to look after? It lives in a glass jar attached to your chest and if you fall over too much it gets upset and cries through the speaker on your control pad. Sometimes your treks through this sodden world are accompanied by the wail of a bruised newborn, a child you have let down, just like you let down that old man when you dropped his sleeping pills in the sea.

As unpleasant as all this sounds, it’s  actually the best bit about Death Stranding. There’s a grim satisfaction to loading up your backpack, stocking up on telescopic ladders and heading out into the savage garden of ravaged America.

It’s beautiful, for a start – after a difficult climb, you really do stop to admire the scenery. And while you’re there, you find echoes of other players – a sign left by a fellow gamer pointing the way to a hidden path, or a ladder helpfully propped over a stream. These asynchronous multiplayer  elements, an evolution of the Dark Souls messaging system, make the cruel world a little more bearable.

Later, players can team up, chipping in materials to build bridges and vast highways, toiling away for the betterment of people they will never meet. The only direct interaction is the exchange of “likes”, an endearing little thank you whispered into the ether. As time passes – slowly, slowly – your arsenal grows: you find a bike, then a truck. You build weapons to fight off raiders and the oily things that slip through the breach (although combat is never your main concern).

As you move towards your eventual destination – the literal Wild West – you link up settlements, bringing ragged crofters onto the “chiral network”, a sort of super-charged internet. You’re a blue collar worker rebuilding America one wi-fi connection at a time.

You’re a blue collar worker rebuilding America one wi-fi connection at a time.

And that would have been enough. But there’s another side to Death Stranding that makes it harder to love. Kojima – working on his first solo game after acrimoniously parting ways with major studio Konami – is one of the more inventive minds in video games, but he’s hardly known for his restraint, and here his worst excesses threaten to overwhelm the entire project.

He may be from Japan, but his native tongue is metaphor. Every visual reference, every line of dialogue, every piece of literature (and there are many) is laden with daft symbolism. Sam has a phobia of physical contact, for instance, which is laughably on the nose in a game about making connections.

Kojima brings in the talents of A-listers including Lea Seydoux, Mads Michelsen and Margaret Qualley, then has them vomit exposition like teenagers who’ve just discovered cheap cider. You’d think one of his director buddies – Nicolas Winding Refn and Guillermo Del Toro both appear in the game – could have offered some guidance.

He’s cited Brexit and Trump’s border wall as inspirations, and there are lofty ruminations on everything from internet culture to environmental collapse. But it’s hard to take anything seriously when you’re also tasked with making grenades out of human effluvium (there are varieties called No.1 and No.2), and have to make small-talk with a chap called Die-Hardman. An otherwise bold, challenging experience sags under the weight of a thousand puerile in-jokes, like Sam sagging under the weight of his rucksack.

Still, it’s worth enduring for the moments you carve out for yourself. The times when you forget about everything apart from delivering parcels: carefully loading your rucksack, learning the map, memorising your routes. Just like a real postman, albeit one who makes explosives out of poo.