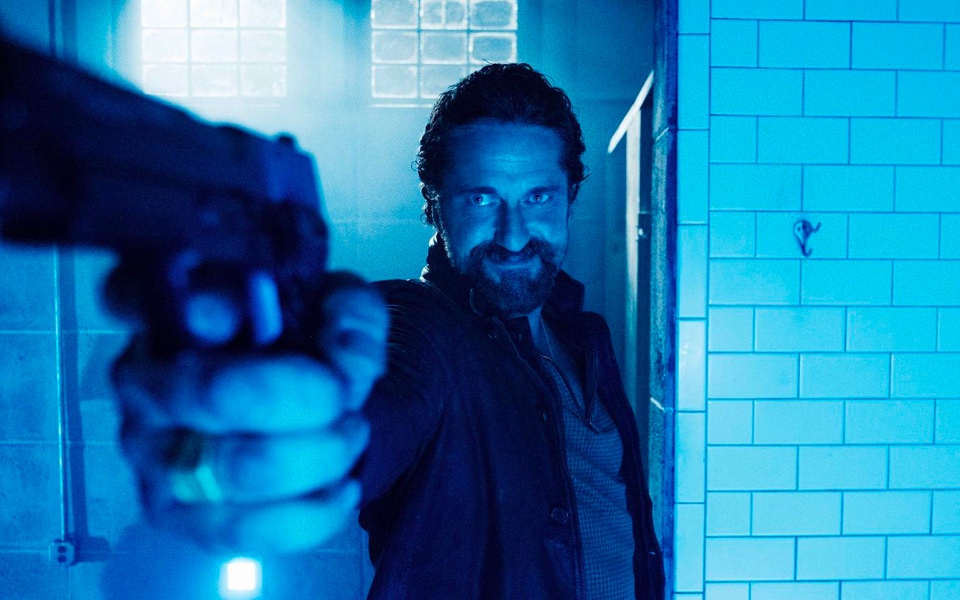 It’s been a while since a Joe Carnahan movie has graced the big screen. The filmmaker brought who brough us Smokin’ Aces, The A-Team, and The Grey has been missing from the director’s chair for seven years following issues surrounding the release of 2014’s Stretch. After making March’s Boss Level for streaming service Hulu, he’s back to cinemas with the claustrophobic Copshop.

The films stars Frank Grillo as Teddy Murretto, a con man who sucker punches rookie cop Valerie Young (Alexis Louder) to get himself arrested. Gleefully heading to his holding cell in a small Nevada station, it’s revealed he’s trying to protect himself from Bob Viddick (Gerard Butler), a vindictive hitman on Teddy’s tail. Bob poses as a drunk to get himself in the cell opposite, and the two men try to convince Young that they should be released. However, with a rival assassin and crooked cops making the station a crime scene, the three have more to worry about.

Copshop is a by-the-numbers Dad Thriller – an overly macho cop story designed to attract the crowd that made Liam Neeson an action star. Obviously, there is an audience for this and just because something has grunt doesn’t mean it’s not entertaining. However, this is far from the best of the action-thriller genre. Mixing gruesome deaths with quips about Man-Buns and diabetes, it’s prison stew of action tropes thrown together and executed loudly. Gruff men in their 50s say things you’d expect gruff men in their 50s to post on Facebook: at one point, Butler growls “I got my degree from the University of Common Sense… didn’t think you studied there”.

Outside of the cells, the killing is done by Toby Huss’ Tony, a particularly remorseless hitman out to steal Bob’s contract. He has an engaging screen presence, but his quirky patter feels forced and pointless. With the exception of Valerie, the cops are mostly overweight and inept, having stunted conversations about mental health and making transphobic references. It’s a challenge to even remember their names, but handily they’re there to be turned into red mist during the gunfights.

The two headliners are confined to their cells for most of the film, warning of the dangers that would happen if the other man is set free. Butler turns his testosterone up to 11, snarling and prowling at his co-star and saying foreboding things like “I’m not a psychopath, Teddy, I’m a professional”. Grillo’s stylish target is engaging enough, even if his backstory is needlessly convoluted. Both action heroes have been better elsewhere, but keeping them caged for over an hour adds some mystery as to what will happen when they get out.

Copshop’s real bright spot is Louder, a tough hero who cuts through the machismo and has her own idiosyncrasies, such as favouring an old fashion pistol that she wields like a gunslinger. The best dramatic actor of the cast, she adds a little bit of weight to the situation, or at least adds variety to the endless monologues.

Copshop is a distant relative of the ballets of violence Carnahan made his name with. Action-thriller enthusiasts may get something from it, however even in these trying times there are many better reasons to go to the cinema.

Copshop is in cinemas from 10th September