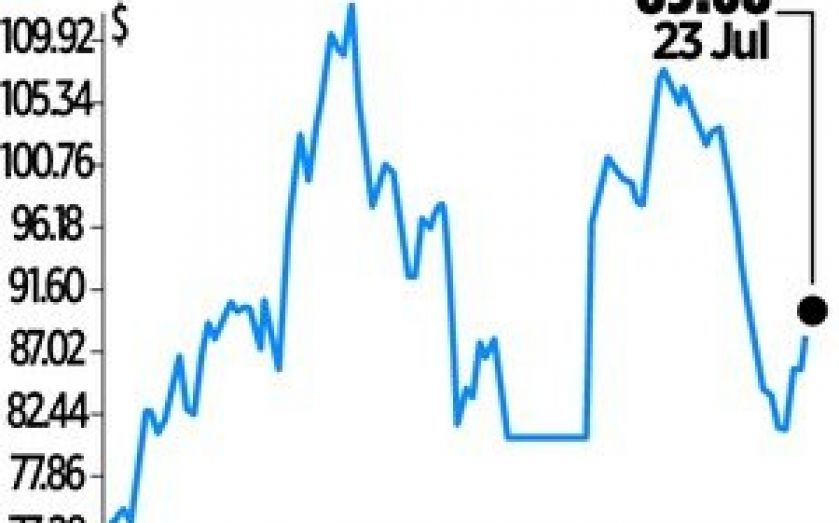 AS THE European economy shows no sign of pulling itself up by its own bootstraps, and with the US hardly faring any better, markets have been heavily dependent on Chinese demand to bolster commodity prices. But the predictions from a Chinese central bank adviser over the weekend did little to give markets confidence that the People’s Republic would be able to sustain its role in propping up demand in commodity markets. Song Guonqing, an academic member of the People’s Republic of China’s monetary policy committee warned that Chinese growth may slow to 7.4 per cent and that inflation may create a drag on returns for industrial producers, curbing any expansion. DROPPING DEMAND The fear of a Chinese hard landing, as well as concerns about the ability of European demand to recover in the medium term, has been a drag on commodity prices across the board – falling 25 per cent from July 2011. With Chinese growth declining for six quarters in succession, markets are looking to the authorities in Beijing for a boost to the centrally controlled economy – potentially in the form of the unwinding of some of the country’s tightening measures to create an effective stimulus. It is also highly likely that we will see the Chinese central bank make use of slowing inflation to allow it to again reduce interest rates, as well as cutting banks’ capital reserve ratio requirements. As a relatively closed economy, gaining direct exposure to Chinese macro data is not as straightforward as it could be. But because of its status as an economic heavyweight there are no lack of proxies for the communist state. Oil, for example, took a slide through fears of a drop in Chinese demand, coupled with easing supply concerns (Iraq resumed oil exports to Turkey after an explosion shut a pipeline that carried over 350,000 barrels a day). But the big commodity producers are perhaps the most heavily exposed to Chinese data. Both BHP Billiton and Rio Tinto lost ground on the back of the Chinese whispers. Rio Tinto is heavily exposed to falling iron ore prices, and the cut in demand from Chinese steel mills has unnerved some investors – and led analysts to cut profits estimates. The market may be able to absorb supply increases for the moment, but should Chinese demand continue to deteriorate, look to the commodity producers to be the canary in the mineshaft.