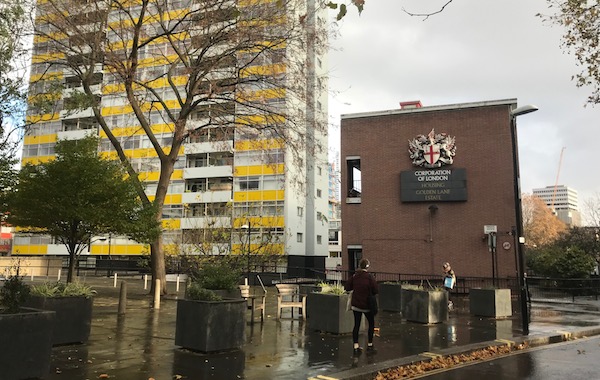 The City of London Corporation is embroiled in a gagging row after a resident councillor who spoke against a planning delegation decision was referred to police for potential prosecution.

Councillor Susan Pearson, who represents the ward of Cripplegate, was threatened with criminal prosecution after she spoke against a proposal to delegate a planning application next to the Golden Lane estate to Islington Council.

Pearson was elected in 2017 on a platform of speaking up on behalf of residents who claim that the grade two listed estate has fallen into disrepair.

The proposal was defeated in January. The following month, the Corporation’s influential standards committee initiated proceedings against Pearson for a breach of the councillors’ code of conduct for participating in a matter in which she was alleged to have had a “pecuniary interest.”

After a series of hearings between May and September, a sanction that was originally imposed for breach of the code was revoked, but a sub committee of the standards committee ruled that Pearson would not be able to speak on any matter concerning the estate on either of the housing committees on which she sits.

Speaking to City A.M, Pearson said she found it “very intimidating” when she received an email from the Corporation’s solicitor informing her that she had been referred to the police.

“There was already the feeling among residents that you were not allowed to complain,” she said. “What is the point of being elected if I can’t speak for my constituents?” she said. “Even after this case I have continued to try to speak up for residents but am being silenced by the standards committee.”

Pearson added that she no longer felt comfortable going to the Guildhall. “The thing that really upsets me is that the standards committee believes that resident members [of the council] need to be told what they can or cannot speak about,” she said, “but there doesn’t seem to be the same focus on members with business interests.”

The City of London Police confirmed that it will not be investigating Pearson.

It said in a statement: “An allegation of a City of London common councilman failing to declare an interest was raised with the City of London Police by the City of London Corporation to ascertain the most appropriate and proportionate response. It was jointly decided that this fell within the scope of the Corporation’s internal procedures and as such a criminal referral was not made. To ensure the decision was consistent in applying relevant legislation and codes of practice, independent advice was secured from another police force and supported the decision made.”

Last month one concerned councillor, a recently retired City solicitor, circulated a document to fellow councillors detailing her case and suggesting that it could give rise to “a perception that the Corporation is trying, more widely, to muzzle the effective representation of City residents”.

The document, seen by City A.M., claims Pearson could not have had a pecuniary interest in the delegation decision because it could not have resulted in a financial advantage for her or anyone else.

Around 20 councillors have issued messages of support for Pearson to her and the author of the memorandum, which say her treatment by the Corporation was “disgraceful” and “appalling”.

One message read: “What has happened to Susan is quite dreadful. We are volunteers, and we do not deserve to be treated like criminals.”

It has also been alleged in the memorandum that after the proposal was defeated in January, Corporation officers failed to disclose that one of the reasons it wanted the decision to be made by Islington was because it was aware there would be “local opposition largely from City residents nearby”.

The standards committee is now trying to pass a new dispensation policy that critics claim will restrict the ability of councillors in residential wards from representing their constituents.

If voted through, the policy will require members, in most instances in which they wish to speak on a matter in which they might hold a pecuniary interest, to fill in a 10-page document to satisfy the standards committee that they should be granted dispensation.

At a meeting of the standards committee on 15 November, which was open to the public, standards committee chair Oliver Lodge said: “We want transparency and consistency and to make sure we maintain public confidence. It is far better that we err on the cautious side. We can’t be allowed to facilitate debates where there are serious conflicts. It is fundamentally important we remain cautious.”

However, a number of council members at the meeting denounced the policy as “restrictive” and an attempt to “throttle democracy”.

“This document is over zealous,” said one councillor. “The committee has taken an Ayatollah approach to dispensations that would disenfranchise resident councillors from speaking on anything to do with their ward.”

Several other councillors, including some of the most senior in the Corporation, had their applications for dispensations either wholly or partly refused as a result of the September decision that barred Pearson from speaking on matters relating to the Golden Lane estate.

At the council meeting, the Corporation's policy chair Catherine McGuinness said: “Some of the decisions we have seen recently have really raised concerns that views have been gagged unnecessarily and this poses a serious risk to our reputation.”

Another councillor said: “There are some people who want to close us down. With this policy you are giving them a loaded gun which they can point at us.”

“This case concerned a member who spoke and voted on a decision relating to a planning application for a site next to her home.

“The matter was fully considered by the City Corporation’s standards committee and its standards appeal committee, both of which concluded that a breach of the code of conduct had occurred and that she should not have participated due to her conflict of interest.

“Both committees had the benefit of consulting an independent person and independent legal advice before they reached their decisions.”