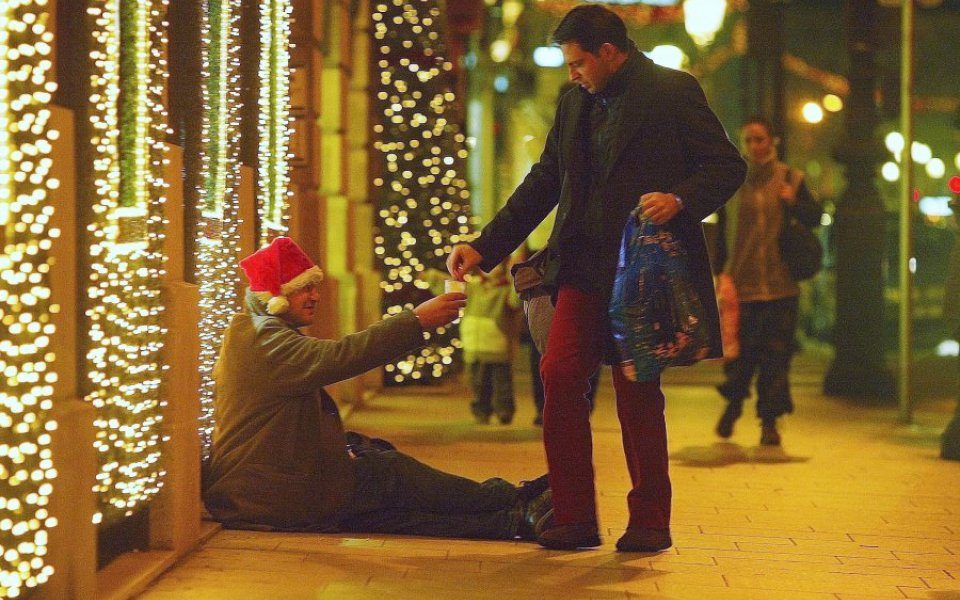 Charitable giving is one of the hallmarks of the festive season. And with the weather getting colder at Christmas, it’s important to highlight the desperate situation facing London’s homeless population.

Estimates vary, but it’s believed that roughly 170,000 people are homeless in the capital. The vast majority of these are living in homeless shelters, hostels, or emergency accommodation, but nearly 9,000 of them are sleeping rough on the city’s street.

It’s an issue that Alex Stephany, chief executive of the tech-for-good startup Beam, cares about deeply. His company aims to use crowdfunding to tackle the homelessness crisis.

Similar to fundraising websites such as GoFundMe or JustGiving, Beam runs donation campaigns for homeless people who want to learn a trade or get training, and helps them into work.

A serial tech entrepreneur and former chief executive of the parking app JustPark, Stephany believes that technology and data is underused when it comes to solving the big social problems of our age, such as homelessness.

“I’ve always felt that, although technology is never the complete answer, you can’t solve any big or complex problem without using tech and data in some way,” he tells me.

“I didn’t know what that problem looked like, until one day I became friends with a homeless man who would sit outside my local Tube station. We got to know each other, we would speak, I’d buy him cups of coffee and pairs of socks when it was getting cold.”

Unfortunately, the man had a heart attack and ended up in hospital. He survived, but Stephany realised that his small gestures were not enough.

“He was in a much worse condition than when we first met. I asked myself, ‘how could I have made a material difference to his life?’ The answer seemed quite clear. Can’t we just chip in and crowdfund training for disadvantaged people, giving them the skills and confidence to support themselves?”

Having learned from this experience, Stephany did further research, consulted with charities, and spoke to other homeless people. He eventually launched Beam in November 2017.

Stephany recalls that the first person Beam helped was Tony, a homeless  man who wanted to be an electrician. Stephany explained Beam’s concept and offered to crowdfund the training — Tony only had one question.

“It was: ‘I don’t understand, why is anyone going to help me?’ And I said, ‘I can’t promise that they will, but I think people out there care about you, and I think Londoners have an untapped desire to help other Londoners move forward with their lives’.”

“We funded Tony’s campaign, he got his qualification, and today he is in work for the first time in about 20 years. His life has been transformed.”

That was two years ago. Since then, Beam has crowdfunded nearly £600,000 for more than 150 campaigns for homeless people, a third of whom have now started work.

So how does Beam work? It has partnered with several charities and local authorities who refer homeless people to the company. The startup then assigns a support specialist to each person who works with them to plan what they want to do for their career, whether that’s becoming an accountant, a bricklayer, or a beautician.

“Out of that personal career plan, which is really built on their strengths, ambitions, and talents, you have a plan and a budget, which includes the training itself but also all kinds of other things: transport costs, tools, childcare costs. We work an awful lot with single mothers in the capital.

“That budget is then crowdfunded, and people can see an exact, to-the-pound breakdown of where the money goes. Once that campaign is crowdfunded, we support them through training and into work.”

Being transparent about where the money goes is crucial to Beam. It publishes a range of metrics, including how much money it has raised, how many supporters it has, where its funding comes from, and how much it spends. Supporters also receive data about what impact their donations  have had in terms of how many people they’ve helped into training and work.

Supporters can donate in several ways: backing an individual campaign,  spreading their donation across everyone on the platform, or making a regular donation to a new campaign each month. Beam is also careful to make sure that its existing campaigns are fully funded before adding new ones.

Stephany insists that 100 per cent of donations go to the recipients — in lieu of collecting a service fee, Beam asks supporters to add a tip to their donation to help pay for its costs. But it also works with local authorities to provide the service for residents.

“It’s about creating savings for taxpayers by upskilling individuals who are long-term unemployed, and allowing them to provide these skills to employers in the capital,” Stephany adds.

“We’re focused on tackling the skills shortages in the areas where we work. In London, that’s things like IT, construction, and professional services.”

While Beam’s work is important, Stephany recognises that it is just scratching the surface of the problem. His plans are to scale up the company so that it can help more homeless people not just in London, but across the UK and around the world.

“We want to build a global social enterprise. We think the model is replicable around the world. These problems get solved when people work together.”

Beam is providing a practical, transparent approach to addressing Britain’s homelessness. There are many worthy causes in the world, but if you’re feeling charitable this Christmas, this might be one to consider.