Is a ball pit in the office more of a hindrance than a help? Designers are calling time on tech playgrounds and creating offices that make you more efficient 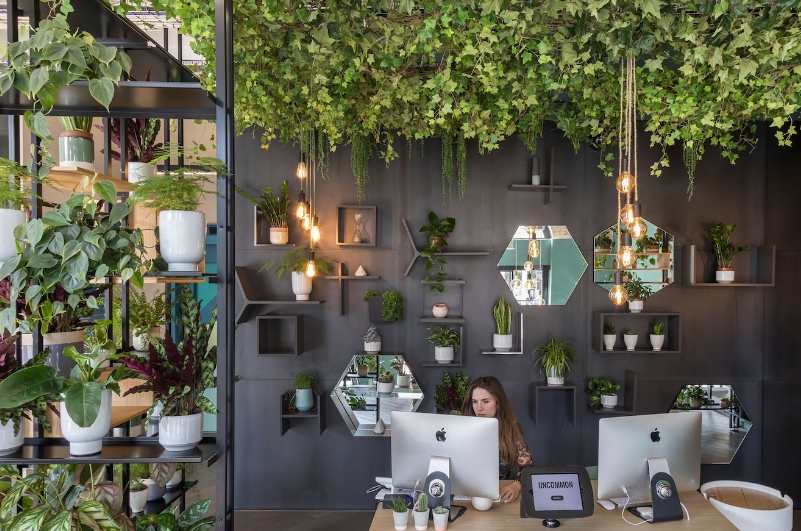 As the tech giants of Silicon Valley scrabble over the world’s best programmers, they’ve been inventing increasingly excessive office perks.

We’ve all heard of them; Facebook’s ball pit, Google’s unlimited free food and on-demand masseuses, Reebok’s fitness classes. But while free concerts, haircuts and therapy puppies may get the talent to sign a contract, are these perks dragging them away from their desks? Some company owners think so, and that’s led to a new movement marrying psychology, wellbeing and design to make us all more efficient. And with UK productivity being among the lowest in the developed world, frankly, we could do with some help.

Tania Adir, the founder of co-working space Uncommon, thinks the days of novelty office features are over and people are now looking for places that will help them be productive. “First and foremost, it’s a place of work. People want to focus and get the job done, so beer on tap at 11am isn’t very helpful. That playful ‘techy’ culture has probably had its few years of being popular. Office spaces are now becoming a lot more sophisticated and sensible.”

In co-working spaces especially, there are a lot of unfamiliar people moving around and you’re not necessarily guaranteed the same spot to work in every day, increasing the number of distractions. But Adir, who has three buildings in Fulham, Borough and Islington, and another one coming to Liverpool Street, spent six months researching the psychology of interior architecture, reading seminal tomes from the likes of Sally Augustin, Cindy Coleman and Neil Frankel to keep her clients on track.

“These aren’t new ideas,” she says. “They’ve been around for some time, but it’s becoming more popular now as people become aware of how important it is to have the right environment to get the maximum amount of creativity and productivity.”

These principles extend to many aspects of office design, whether that be in a fixed location, casual hot-desking environment or your home.

The thing virtually every expert agrees upon is the importance of variety. Sitting at the same desk all day is boring and counterproductive, and an ideal workplace will have a diverse array of rooms and seating arrangements to move between throughout the day, each one tailored to the task at hand. Guy Ivesha is the founder and CEO of Mortimer House, a seven-storey art deco building in the middle of London’s Fitzrovia that houses companies as diverse as dating app Tinder, women-only members club Marguerite and networking business Welltodo.

“I always had the desire to create a space that celebrates the individual,” says Ivesha. “I felt there was a need for spaces where one could focus, unwind and interact face-to-face with other members of a curated community – taking time out, not only from the aesthetic ‘sameness’ of so many workspaces, but also from the avalanche of digital connectivity we have in the modern age.”

As such, each floor is organised to reflect Maslow’s hierarchy of needs, among them physiological needs, social belonging, self-actualisation and self-esteem. Abraham Maslow was renowned in the 40s and 50s for his no-frills psychological theories surrounding human motivation and happiness. “A productive office is one that harnesses how our needs and moods change throughout the day,” says Nick Stocks, a partner at venture fund White Star Capital, which is also based in Mortimer House. “It’s a mix of environments where you can focus, meet, eat, workout or relax, helping you to get into the state of flow for longer.”

The ground floor at Mortimer House is all about physiological needs so there’s a restaurant and bar to make sure every worker is fed and watered. The design is also focused on the building’s ‘physiology’ with structural aspects exposed, such as the wooden slats, concrete columns and plaster mouldings.

Floors one through four, the co-working floors, take care of social belonging using a variety of gathering spaces and a classic tea trolley to foster accidental social connections. Floor five is all about self-esteem, allowing people to come out of themselves in a relaxed, home-from-home environment; cosy up next to a fireplace on a vintage armchair or venture onto the outdoor decking to have a good hard think in the fresh air.

Floor six, the ‘penthouse’ of the building, is about self-actualisation so it’s a flexible events space with a gallery of rotating art installations. When it’s not party time, it doubles up as a quiet work floor, whitewashed and stripped of clutter to minimise distractions.

Spaces to block out the world are vital for getting down to work, says Adir, who introduces sensory experiences in Uncommon to focus her clients’ minds, such as relaxing music.

“Research shows that complete silence tends to be more distracting than having some background music, but it has to be predictable and avoid any lyrics. The speed of the music we use reflects the heartbeat otherwise it becomes too invigorating and you can’t focus and concentrate.”

Smell, she says, is another subtle element that can be introduced to influence people’s working patterns. “The part of the brain responsible for memories and emotions is the same part that’s responsible for smell. Something like lemon verbena tends to put you in more of a concentrative state of mind. Vanilla or cinnamon is invigorating and conducive to creativity, especially if you work in a more collaborative environment.”

Uncommon’s collaborative spaces use large boardrooms with an array of stationary and magnetic boards to help with brainstorming, while in other more informal rooms, the seating arrangements vary in height. “When you sit low, you create a sense of trust between people, so if there are sensitive discussions to be had, there are places to sit that are quite low down.”

Uncommon has social belonging covered, too, with the likes of Borough Wines hosting complimentary Thursday evening drinks, and in-house coffee lounges, where the baristas are encouraged to make small talk and remember drinks preferences to give lonely freelancers a bit of human connection.

But what if you work from home? An increasingly large number of us do, and it’s easy to get it wrong when you’re curating office space by yourself. All the experts insist on natural light to maintain concentration and mood, so don’t be tempted to stick some fluorescent bulbs up in your garage – you’ll spend the entire day snoozing. It also helps if you live near a park.

“For us, a calm view to the garden with greenery and sky allows uninterrupted contemplation, inspiration and creative thought. Views onto busy streets would be a distraction,” says Nicola Osborn, design director at MoreySmith, the studio behind new headquarters for Primark and Coca-Cola. “The huge advantage of a home study is the complete control you have over the ambience you want; mixed furniture, lighting solutions, table layout space and soft seating can help to create a unique environment that’s personal to you.”

You could start by painting the walls. In September, Taubmans, a paint company in Australia, revealed the results of a study it conducted with neuroscientists in Melbourne using Google Daydream VR headsets to find out what emotions certain colours stir within us. For a calm, focused environment, light green, lilac and blue were best, but if your work is particularly tedious, you might want to try brighter colours like yellow, orange or pink to wake you up. Darker colours, while on trend, are associated with sad emotions, the study revealed, and were more likely to have a negative effect on your mood.

Exercise is also enormously invigorating and essential to get the creative juices flowing. While co-working spaces may lay on yoga classes or have dedicated gyms, a simple way to do this in a house is to have your office upstairs so you’re forced to climb up and down to get a cup of tea.

The International Quarter in Stratford, east London, has made staircases a central feature of its design. Rogers Stirk Harbour and Partners, the architects behind the Leadenhall Building, and Arney Fender Katsalidis, the firm behind upcoming skyscraper 100 Bishopsgate, designed the two new office buildings that house Transport for London, UNICEF and Cancer Research UK among others. Full height windows flood the space with natural light and fresh air, while staircases take prime position over lifts to encourage people to move more and facilitate “natural collisions” between companies.

So there you have it – if you want to be more productive, you need to crack open a window and paint the walls blue. Save the puppies for your own time.