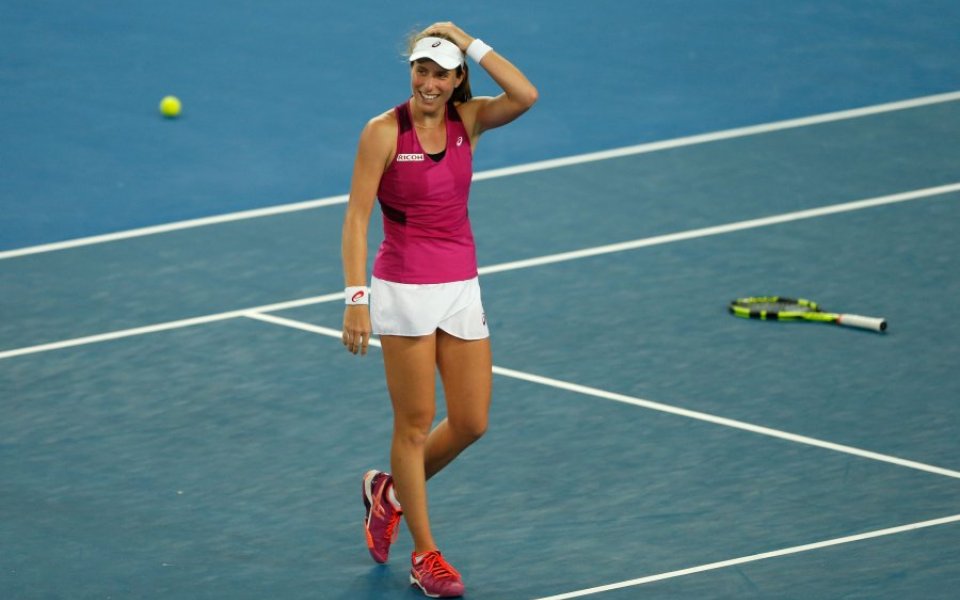 Rising star Johanna Konta insists she is no overnight success after becoming the first British woman for 32 years to reach the quarter-finals of a grand slam tournament.

Konta, 24, continued her giddy ascent yesterday by beating No21 seed Ekaterina Makarova 4-6, 6-4, 8-6 in a titanic fourth-round slug-fest – the biggest win of her career and the second longest match of this event, at more than three hours.

Victory set up a last-eight meeting with Chinese qualifier Shuai Zhang tomorrow morning and saw the Sydney-born world No47 match Jo Durie’s run to the same stage of Wimbledon in 1984.

Konta has put an indifferent start to her career behind her in an astonishing 12 months of slaying big names, although she believes those wilderness years helped forge her new-found success.

“This journey started when I was about eight years old, so we’re coming up to 18 years now,” she said.

“I’ve always said I do not believe in kind of a light-switch moment. My journey has been the way it has been for a reason: to accumulate the experiences I’ve had. I can’t tell you where it started, because it’s been ongoing ever since I started playing.”

Konta has climbed more than 100 places in the rankings since this time last year, when she failed to qualify for the Australian Open, and is on course to break the top 35 for the first time next week.

She had to be at her gritty best to come from behind and see off six-time grand slam quarter-finalist Makarova, a player ranked 23 places higher who reached the last four here in 2015.

Having blinked first in the opening set she levelled to force a decider and regained her composure after the Russian took a lengthy medical time-out one game after a 10-minute bathroom break.

Konta served for the match at 5-4 only to lose her nerve with glory in sight. Yet she did not crumble and broke again for 7-6 before clinching the triumph with an emphatic service game.

She now faces the only player in the women’s draw ranker lower than her in Zhang, who had never won a grand slam match before last week and, says Konta, is riding an even more improbable sequence of wins.

“I think Shuai Zhang is actually on a bit more of an incredible journey than myself,” she added. “It’s a quarter-final of a grand slam, so whoever I’m going to play it’s going to be an incredibly good player.”