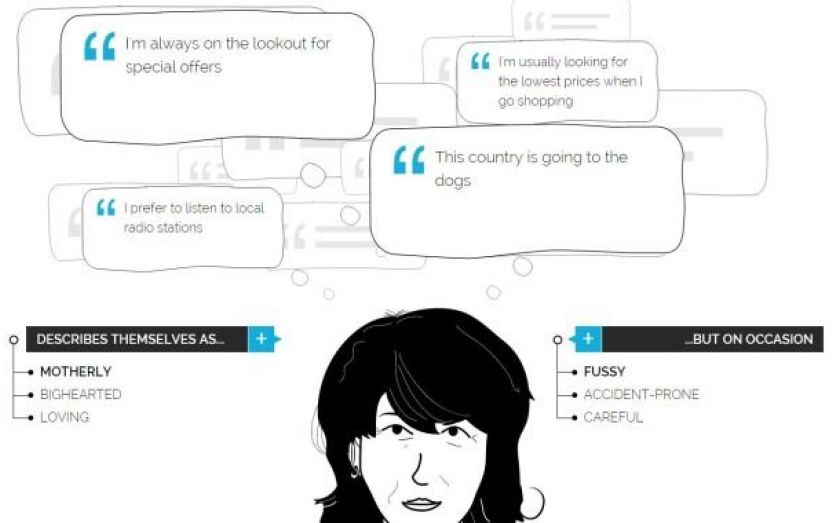 What does a Waitrose shopper look like, and how would you tell them apart from a Sainsbury's regular?
There's actually not much to choose between them, according to YouGov, which has just released the best visualisation tool we've seen for a while.
What YouGov says is particular (as opposed to generally true) about Sainsbury's and Waitrose core customers is that they tend to be "ABC1" (ie. wealthier) women aged 60-and-over, with £1,000 or more discretionary spend, who live in London and the South.
Their jobs vary – the group we're calling Waitrose Wendys are more likely to work in business, consulting or the media, while Sainsbury's Sallys are in healthcare and medicine, civil society and charity work, with business third most popular.

Their politics are also different – Waitrose women are more likely to swing further to the right than the neutral Sainsbury's shopper.
Wendy's list of favourite food is what you might expect from someone shopping at the upper end of the scale – her top three foods are saltimbocca alla Romana (that's veal to you and me), braised endive and oysters. Sally loves hummus the most, followed by gambas al ajillo (garlic prawns) and then she too would plump for the saltimbocca.

How do the rest of the supermarkets compare?
Tesco's shopper – let's call her Tracey – is more likely to be younger (40-59), poorer (£125-£499) but in the same social bracket. A lover of steak, cake and risotto, she is more likely to live in Northern Scotland but appears not to have been swayed by the Yes or No campaigns.

Aldi and Lidl shoppers have a lot in common.
Both are men aged 60-plus – we're calling them Albert and Leonard – who work in the home and garden. They hail from the North West and have less than £125 a month to spend. Asda Amy is from the same neck of the woods and has the same spending power, but is more likely to work in consumer goods.

Albert thinks things like “this country is going to the dogs”, a view shared by Amy, while Leonard is a conspiracy theorist – he thinks “the world is controlled by a secretive elite”.

Wendy and Sally meanwhile are more preoccupied with thoughts of organic produce, locally grown naturally, and high quality goods that they don't mind paying for.
If you were Asda you might be concerned (or, in reality, not that surprised) to find your shopper is not particularly loyal. In fact, while she loves George for clothes and Asda for petrol, she shops at Aldi, Morrisons and Lidl as well.

Here is a link to YouGov's notes about its methology, showing that these profiles are not the average or typical customer, but rather how their behaviours and so on compare to others in that group.