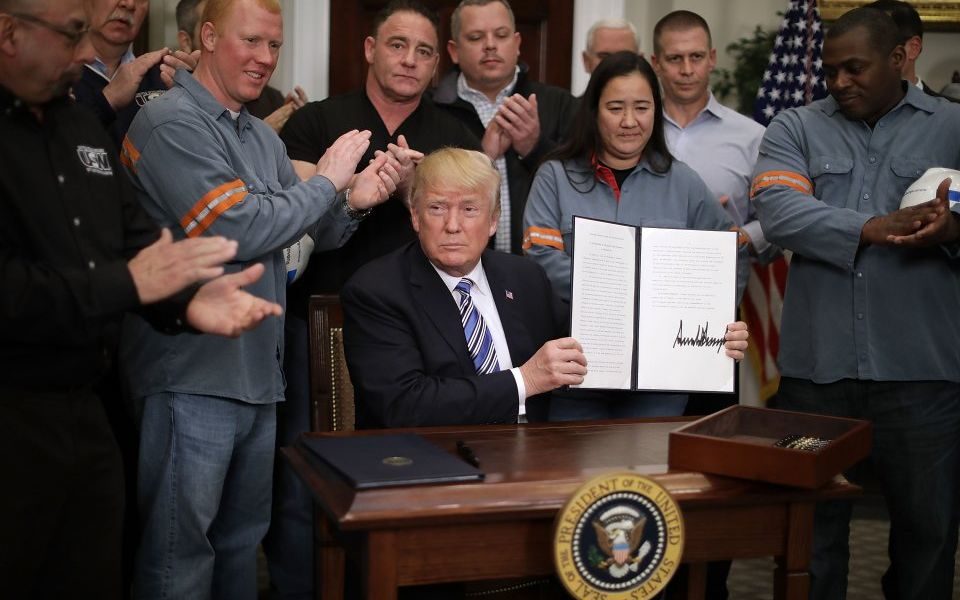 We explain all of the ins and outs of the turmoil in markets this week, focusing on at what might happen next with escalating trade tensions.

How far have stock markets fallen this week?

Global stock markets have come under pressure this week on fears over escalating trade tensions. The selling has been most marked in the last 24 hours following President Trump’s announcement that tariffs of $60bn would be imposed on Chinese imports.

The table below shows the performance of a variety of regional stock markets up until the morning of 23 March 2018 (apart from the US which shows performance to the market close on 22 March).

Asian markets have witnessed the most significant falls so far. Japan’s Nikkei 225 index suffered the steepest declines over both the week and the past 24 hours. Large exporters play a significant part in the Japanese economy and there are concerns that they could be caught up in any US-China trade war. Another factor is that the yen is perceived as a “safe haven” asset and is often in demand at times of market stress. A stronger yen would make Japanese exports more expensive.

Elsewhere, China and Hong Kong equities have unsurprisingly also borne the brunt of the selling pressure. However, there are other factors contributing to the declines today too, notably Naspers, the South African media group and technology investor, selling a 2% stake in Tencent, the world’s biggest gaming company and owner of China’s WeChat social network

Shares on the New York Stock Exchange were also under pressure amid worries that the tariffs could hit growth in the US as well as in China.

Eurozone and UK equities have escaped the worst of the selling. News came yesterday that the EU, and others including Canada and Mexico, will be temporarily exempt from the new tariffs being applied by the US on steel (25%) and aluminium (10%). This week’s EU summit is continuing today with the bloc’s leaders discussing its response to the escalating US trade measures.

Government bond yields declined during the week’s later sessions, which meant prices rose. Yields on 10-year US Treasuries and German Bunds fell six basis points (bps) on Thursday, while 10-year gilt yields fell by eight bps. Government yields are marginally lower on the week. The riskier areas of the corporate bond market were impacted too as spreads (the difference in yield over equivalent less-risky government bonds) widened.

Why are markets falling?

Markets have fallen after US president Donald Trump announced plans to impose tariffs on up to $60bn in annual Chinese imports. On Friday China retaliated by revealing plans to apply tariffs on 128 US products.

This raised the prospect of an all-out trade war between the world’s two largest economies. Investors fear the impact of escalating trade tension on global economic growth and corporate earnings, with cyclical sectors most exposed to economic swings leading the sell-off.

The latest bout of volatility follows the market weakness in February amid fears around the pace of policy tightening by the Federal Reserve (Fed) in response to growing inflationary pressures in the US economy. As expected, the Fed raised interest rates by 25 basis points yesterday at the March Federal Open Market Committee (FOMC) meeting. At his first FOMC meeting, new Fed chair Jerome Powell also announced that the committee is pushing up its growth and inflation forecasts and increasing its expected path for interest rates.

The prospect of a trade war-driven slowdown follows a period of rising optimism around the outlook for the world, and US economy in particular. In January the International Monetary Fund upgraded its global growth forecasts for 2018 and 2019 by 0.2 percentage points to 3.9%.

Why has President Trump introduced tariffs?

President Trump accuses China of, over a period of decades, unfairly acquiring US companies’ intellectual property and says China must pay the price.

The implementation of tariffs could also help to address the US’s $375 billion trade deficit with China which President Trump has made a priority.

With US midterm elections scheduled for November, there is increased incentive for President Trump to deliver on campaign pledges. It could also be argued that tariffs are the feature of a bargaining strategy for preferential trade, which could prove popular in key voting states, particularly in the so-called rustbelt.

There is therefore more to come. President Trump has ordered the US Trade Representative to propose a list of product tariff increases within 15 days, and to consider further tariffs on goods from China, reporting back within 60 days. President Trump has also tasked the US Treasury to prepare a plan to impose further sanctions on Chinese investment in technology sectors within 60 days.

These moves follow the announcement of 25% tariffs on steel and 10% tariffs on aluminium tariffs earlier in the month. However, shortly before their implementation, the Trump administration has announced further exemptions to those previously agreed with Canada and Mexico. Imports from the Argentina, Australia, Brazil, the EU and South Korea will also be exempt.

China’s Ministry of Commerce indicated it is planning tariffs on 128 US products, representing around $3 billion. China’s ambassador to the US indicated that the allegations had no foundation and pledged measures in retaliation. However, he also stated that the country did not want a trade war, echoing comments from other Chinese officials in support of free trade. This raises the prospect that China could be willing to negotiate.

Other potential retaliatory measures from China, not currently discussed, include opening a case against the US at the WTO and limiting the purchase of US services by the Chinese government and state-owned enterprises.

History shows us that trade conflicts are rarely good for markets. The most commonly cited example was the 1930s Great Depression, largely a result of protectionism rather than the 1929 Wall Street Crash. There are also more recent examples.

In March 2002 President George W Bush announced steel tariffs of 8-30%, scheduled to remain in effect until 2005. Canada and Mexico were exempt. The EU immediately threatened (but did not enact) retaliatory measures, and went to the World Trade Organisation (WTO). The WTO ruled against the US in December 2003 and the US dropped its tariffs rather than face retaliation from the EU.

And equities struggled before making a recovery. Germany’s DAX seems to have been hit harder than others.

An alternative recent example was in Russia in 2014, though this was a case of sanctions, which included trade measures, rather than tariffs. The chart below shows the performance of the rouble, Russian equities and Russian bonds. There were definite impacts on all of them.

Important Information: The views and opinions contained herein are those of Philip Haddon, Head of Investment Communications, and may not necessarily represent views expressed or reflected in otherSchroders communications, strategies or funds. The sectors and securities shown above are for illustrative purposes only and are not to be considered a recommendation to buy or sell. This communication is marketing material.