Alex Rodriguez: Baseball is a thinking person's game so it fits beautifully in London 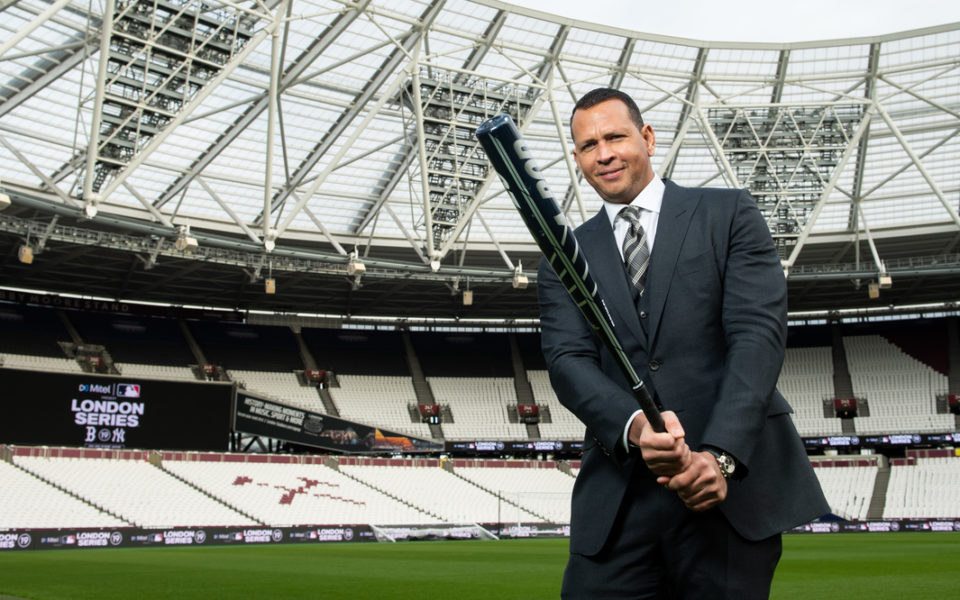 American sports are renowned for their scale and razzmatazz so it should perhaps be little surprise that Major League Baseball, in making a push for a slice of the British market, has sent its big hitters out to bat.

For the first MLB games ever to be staged Europe, which will be held at the London Stadium in June next year, it is despatching the New York Yankees and Boston Red Sox, whose rivalry is the most famous and fiercely contested in baseball.

And to draw attention to the looming deadline for fans to register for priority access to tickets for the two-game London series, it rolled out arguably its biggest name of the 21st century, 14-time All Star and Yankees icon Alex Rodriguez.

“We’re leading with our best, and we’re coming here with the best America has to offer,” A–Rod said on Monday.

MLB is not taking any chances, then, as it looks to gain a foothold in a crowded British sports market already used to accommodating annual visits from other American sports leagues the NFL and NBA.

The Yankees are one of the most recognisable brands in any sport, 27-time World Series winners and boast one of the game’s brightest new stars in Aaron Judge. The Red Sox, meanwhile, are the current champions and the Yankees’ bitter rivals for more than a century.

Baseball executives may have been slow to follow their American football and basketball counterparts to the UK but the hope is that, by starting with a showcase of the very best it has to offer, MLB can make a splash comparable to that of the NFL and NBA.

“It’s rare that we’re going to come out across the pond and have the world champions, the Red Sox, the manager of the year in Alex Cora, the MVP in Mookie Betts. And you’re going to have the world’s most popular baseball player and superhero in Aaron Judge.

“This guy is 280lbs, 6ft 7in, he comes out of Game of Thrones, he’s under 10 per cent body fat and he has an over 30-inch vertical jump. I don’t know how this place will keep them in the stadium, but he will make baseballs look like golf balls.”

MLB’s English managing director for Europe, the Middle East and Africa Charlie Hill calls the calibre of team “a really important statement of intent” regarding the league’s plans for expansion into Europe and says the Yankees and Red Sox had long been wanting to play on British soil.

Rodriguez, who retired in 2016, says it is a venture that has been “in the works for 15 years” and speaks fondly of his own experiences playing overseas for the Yankees in Japan – where, along with Mexico, MLB has staged more than half a dozen games.

“I wish I was playing. I may still try to dress with the Yankees. I may get arrested! I dreamt as a player of playing here in London, and I was envious of the NFL and NBA that they came out here and had so much success,” he said.

“It’s really a dream come true for me as a lover of MLB and baseball in general. This is an incredibly important market for baseball. Japan was a thrill. I’ve spoken to a handful of players from each team, and they’re thrilled and excited. They wish it was four games, not two.”

Hill echoes the occasion’s appeal for players. “Coming to a new market and being part of a group of players who are responsible a historic event for the sport, you can’t underestimate that for baseball,” he told City A.M. “For those players to be a part of that is extremely exciting.”

Selling 57,000 tickets for each game of the London series is unlikely to pose a problem for MLB, who tested the water with a successful Home Run Derby free fan event featuring cricketers Alex Hales and Jos Buttler in Hyde Park in July this year.

The bigger question centres on how big the sport can become in Britain. Another two-game series involving as-yet unnamed teams is scheduled for 2020. Provided they are popular, the vision is to “layer up”, adding more European games to the London dates, Hill said.

Rodriguez is confident that this country will take to baseball readily, even if his belief appears to be rooted in an endearingly quaint notion that British sports fans are mostly cerebral and studious.

“Baseball is synonymous with numbers and history like no other sport, and because it’s a thinking people’s game, I think it fits beautifully here,” he reasoned. “It’s an academic game. The fact there’s no clock is part of its charm. I know Brits love history, and we’re going to give it our best with Yankees-Red Sox.”

The series already has a title partner in telecoms firm Mitel, an existing MLB sponsor, and Hill says discussions are ongoing with other parties. “There is a tremendous amount of interest to be a part of this, both from our partners in the US but also new partners,” he said.

MLB has drawn up plans for further fan engagement activity, particular those who were unable to get tickets, and projects with community groups and schools, especially in east London. Crucially, given the arena’s chequered past, MLB also knows what it wants to do with the stadium.

Inside the bowl, some seating will be reconfigured to make space for the baseball field, which is to be laid on top of West Ham’s football pitch, and place spectators as close as possible to the action. “That’s fundamental and we’re able to do that in this stadium,” said Hill.

Outside, pitching pens and other traditional ballpark entertainment will nestle alongside beer and hot dog stands on the spacious walkways surrounding the former Olympic Stadium.

Rodriguez will be back at the venue in seven months’ time, working for broadcasters Fox and ESPN, relishing his new role as a missionary for the sport. “Recently I heard that London is open for business,” he said. “Now it’s open for baseball.”

The Boston Red Sox will play the New York Yankees in the first ever Mitel & MLB Present London Series 2019 on June 29 – 30 at London Stadium. To get access to pre-sale tickets and for all the latest event updates, register at mlb.com/londonseries