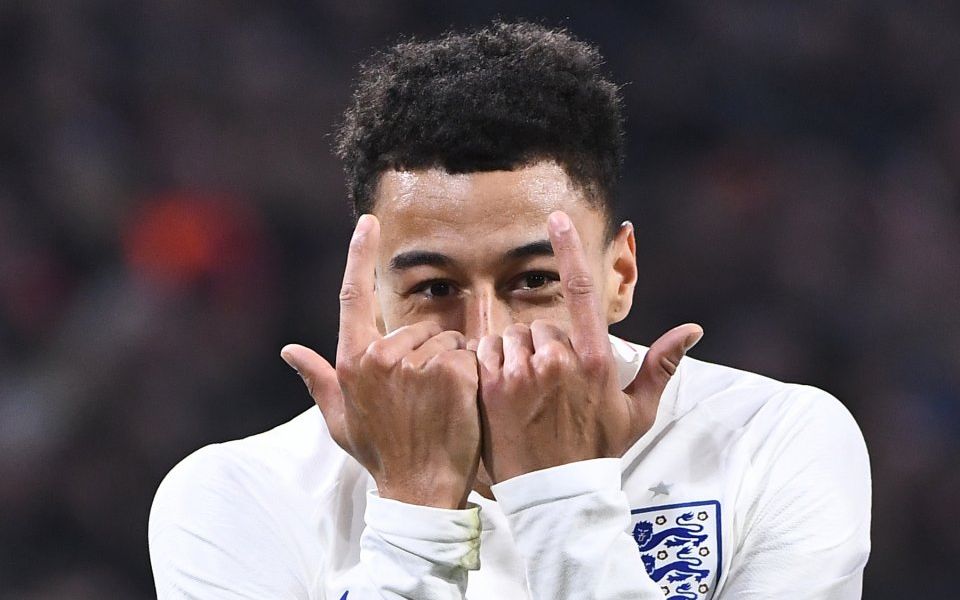 Jesse Lingard is ready to make his mark at the World Cup.

Less than three weeks ago, as England were preparing for their first warm-up game against Nigeria, Lingard applied for four trademarks with the UK Intellectual Property Office; three featuring his nickname “JLingz” and another featuring the image of his goal celebration.

Should the Manchester United midfielder score in England’s World Cup opener against Tunisia on Monday night you will likely see it. Lingard hides his head behind his hands, which have been shaped into his two initials in a kind of gang sign.

Like Mo Farah’s “Mobot”, Usain Bolt’s “Lightning Bolt” and Gareth Bale’s heart-shaped “Eleven of Hearts” gesture, Lingard appears to be looking to leverage a distinctive celebration to enhance his own personal brand.

“He’s filed them all in about the space of two weeks and they all cover trademark class 25 essentially covering clothing, footwear and headgear,” Jonty Warner, intellectual property lawyer at Mishcon de Reya, told City A.M.

Lingard — who filed for the trademark via company JLINGZ LTD, of which he is a director alongside brother Louie Scott — has trademarked his celebration only relating to its replication on those specifications covered by class 25 — not the performance of the celebration itself.

Read more: There's so much to like about England under Gareth Southgate – now they just need the results

“When Bale applied for similar trademarks it was reported that he’d trademarked the celebration itself which was slightly misleading,” says Warner. “What it gave Bale the power to do is prevent other traders from using that logo in the course of trade.”

So, should Colombia’s Jefferson Lerma, for example, or another player with the initials JL copy Lingard’s celebration at the World Cup there would be no issue. What would be a problem is if Lerma they then tried to capitalise by selling merchandise bearing the image of the celebration in the UK.

“Other players will see the World Cup as a platform to launch their own brands,” Carissa Kendall-Windless, IP solicitor at EIP, told City A.M. 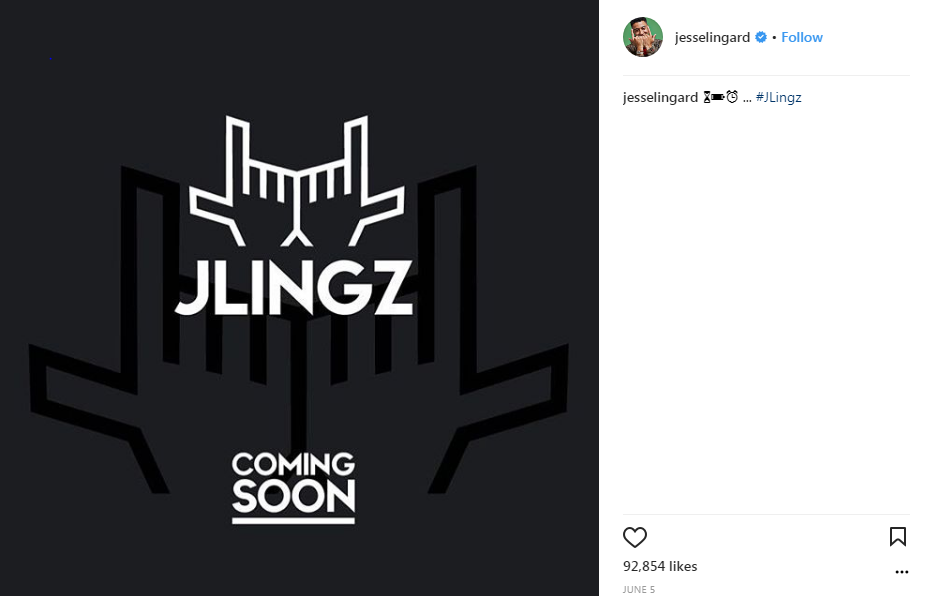 Lingard posted his new logo to social media days after filing it with the UK IPO (Source: Instagram.com/jesselingard)

“So why would they want to mimic another player when they have the perfect platform to put their own brand out there rather than some version of Peter Crouch’s ‘robot’ or Gareth Bale’s ‘heart’?”

Indeed, there is no better platform than the World Cup for Lingard to introduce Brand JLingz to the masses. United’s biggest game of last season, the FA Cup final, peaked at 8.7m viewers in the UK, just over half of the 16.9m peak that watched England lose to Iceland at Euro 2016.

“It’s smart to register these trademarks in advance because there’s such an impatience from companies to associate themselves with individuals that are a part of World Cup success,” Andy Sutherden, global head of sport and partnership marketing at H+K Strategies, told City A.M.

“They won’t want to wait for a trademark to go through or a management company to sort out its sales pitch. Jesse Lingard’s team has acknowledged the fact that if he does well in Russia, there’s an immediate opportunity but one with a very short shelf life. They’re also understanding of the fact that people who become known for something different — think Crouch and the robot — extend their marketing appeal beyond the audience of sport.

“You want to give yourself the best chance to appeal to the broadest range of commercial interests as possible. Lingard has done that through his broader lifestyle presentation but also by constructing a package where he’s safeguarding revenue against his name.”

With a name that sounds like it belongs to a rapper, a celebration that could be in a music video, a reputation for knowing all the latest dance moves, a colourful fashion sense and a lively social media presence, Lingard embodies the youth-focused and culturally conscious marketing campaigns that brands like Nike and Adidas currently build around football.

“If you think back to Euro ‘96 and Three Lions and what that song was about — nostalgia and all that quite prosaic stuff around football,” Richard Barker, co-MD director at M&C Saatchi Sport and Entertainment, told City A.M.

Read more: Kevin De Bruyne, Eden Hazard and…Jesse Lingard? Why Manchester United man is up there with the best this season

“Lingard is embodiment of that. The players in this young England squad are much closer to the direction of culture.”

England’s official squad announcement for this summer’s tournament was typical of modern football. A diverse group of English teenagers announced the names of the players using plenty of slang, attitude and — in the case of Lingard — the JL celebration.

“The World Cup is a global postcard for any player to maximise his marketing potential,” says Sutherden. “But the word potential is important. You can’t be kicked out of the group stage, be hugely marketable and then hope that lots of of endorsement opportunities will be forthcoming.”

So the trademarks have been published, the brands put on alert, the social media following engaged. Now comes the hard part — performing well for England at a World Cup.