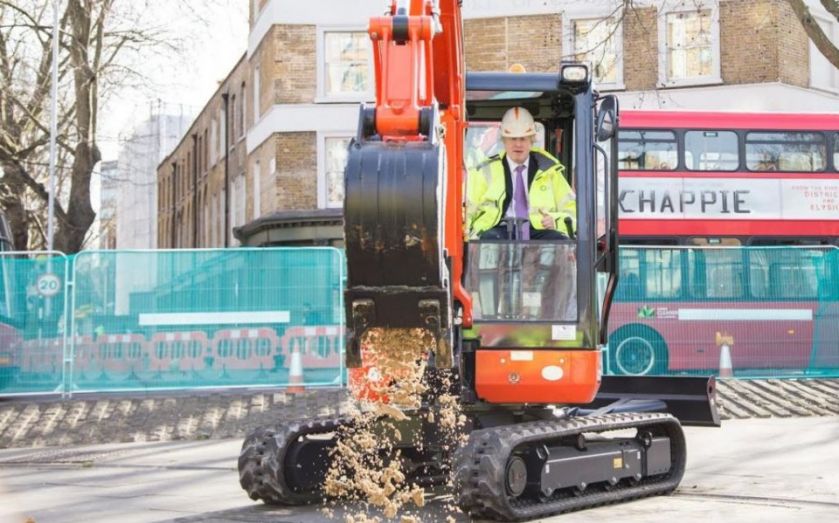 Work on Boris Johnson's flagship “Crossrail for Bikes” scheme began this morning, with the mayor donning a hard hat and clambering into a digger to help break the ground.

The first leg will be the route that runs north to south from Kings Cross to Elephant and Castle – notoriously the most dangerous junction for cyclists on London's roads.
The work beginning this week is expected to create a safe route through St George’s Circus, turning  Blackfriars Road “from a car-dominated street into a new urban boulevard, with new trees, almost 20,000 square feet of space for pedestrians, and a two-way segregated cycle track” according to Transport for London.

Johnson said: “This is a big day for cycling and for London, the culmination of years of campaigning by cyclists and months of planning by TfL.
“I know a lot of people thought this would never happen – and a small number of people didn’t want it to happen. But it is happening, and London will be better as a result.
“Getting more people on their bikes will reduce pressure on the road, bus and rail networks, cut pollution, and improve life for everyone, whether or not they cycle themselves.”

Work on the route south of the river will be finished by the end of the year. The east-to-west route, from Tower Hill to Westbourne Terrace, will begin in April. Along with upgrades to Cycle Superhighway 2, which runs from Aldgate to Bow, and the new Cycle Superhighway 5 from Oval to Pimlico, all routes will be open by spring next year.
The superhighway will have the capacity for 3,000 cyclists an hour, which is equivalent to 41 double-decker buses full of people.
The works are expected to put added pressure on the roads in the meantime, however, and drivers are “strongly advised” by TfL to use alternative routes, particularly during rush hour.