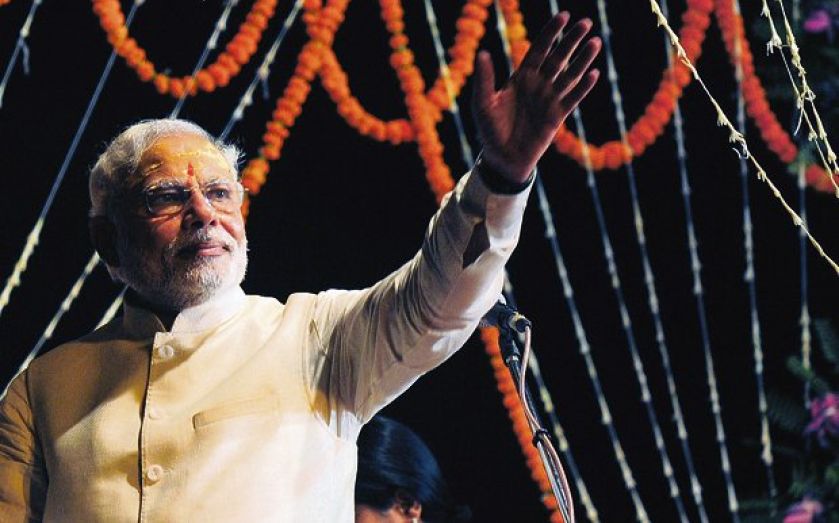 GENOA – I find myself in this predictably beautiful Italian city, about to visit the house of Christopher Columbus. Like most American schoolchildren, I remember finding the fact that Columbus discovered the new world by mistake uproariously funny, as the “Admiral of the Ocean Sea” literally bumped into the Americas, sitting annoyingly in the way of his attempt to find a quicker trade route to the East. When I questioned my wise father about this, he merely replied, “Let’s be glad the ship sailed”.Well, in India, Narendra Modi’s ship has well and truly set sail as the country’s election results have come in, leaving the leader of the Hindu nationalist BJP the undisputed master of the subcontinent’s politics. Modi is on course to win around 336 seats in the Lok Sabha, India’s parliament, an absolute majority and an increase of a whopping 195.In contrast, the centre-left Congress Party – which has governed India for 55 of the 67 years the country has been independent – is set to return only 59 to parliament, a decline of 175 seats, and easily the party’s worst showing ever. This is a result well in excess of the BJP’s wildest dreams, and Congress’s worst nightmares, leaving Modi the first Indian leader to be able to form a single party government since 1984. This amounts to nothing less than a revolution, a political sea change for the most populous democracy on earth, with huge promise for the world’s investors.Neatly, Modi’s to-do list mirrors the very reasons Congress was so shunned. First, the outgoing government under Prime Minister Manmohan Singh never managed to get a handle on corruption, a fact that has enraged average Indians over the past decade. Malfeasance involving the sale of billions of dollars worth of natural resources – it is estimated that politicians and officials took bribes worth between $4bn and $12bn during Congress’s tenure – has poisoned Indian politics, hampering its putative economic miracle.The ascetic, scrupulously honest Modi has campaigned as a man fully capable of cleaning the Augean Stables; if he is to remain popular and further his economic programme, he must crack down on corruption, and quickly.Secondly, and befitting India’s very odd fusion of feudalism and democracy, the Congress elites in New Delhi under Singh never bothered telling the Indian people what they were doing; it is no wonder a sense of drift quickly set in. Incredibly, in the decade he has been in charge, Singh gave just three full press conferences. A media-savvy Modi, having just run the most effective political campaign in India’s history, must renew the link of the governing with the governed if India is to fulfil its beguiling economic prospects.Third, the dragon of inflation must be quickly tamed. It has remained over 8 per cent for the past two years, a painfully high level that spelled disaster for the Congress Party as basic food staples such as onions have become unaffordable. Congress will rue forgetting the Indian saying that pricey onions lose votes.At the root of the inflation problem is Congress’s failure to grapple with a glaring budget deficit. The pro-business Modi has made much of his administrative abilities after having successfully run the state of Gujarat since 2001. His toughness in forcing the government to live within its means will be required to generate the economic credibility to attract the outside investment India so desperately needs.Lastly and by far most importantly, Modi must reignite India’s world-beating growth rates of the past. The basic reason Congress lost was that growth has slowed from around 8.5 per cent of GDP a decade ago, to a comparatively measly rate of less than 5 per cent now. Given that of all the emerging markets in the Bric grouping, India is the only one with the possibility of serious catch-up growth still on the cards – primarily due to its favourable demographic position – this is Modi’s litmus test.Investors should look at India in this fashion: even given the corrupt, inefficient government of the past decade, India still managed to grow at 4.5 per cent. Imagine what it can do with more efficient, honest, pro-business people in charge? This is the very welcome message for investors coming out of this vote, which promises exactly that.It used to be said in India that Congress and the left had no viable economics, but the right had no viable path to power. Modi has changed this, and decisively. It is good news for both India and investors around the world.Dr John C Hulsman is senior columnist at City A.M., and president and co-founder of John C Hulsman Enterprises (www.john-hulsman.com), a global political risk consultancy. He is a life member of the Council on Foreign Relations, and author of Ethical Realism, The Godfather Doctrine, and most recently Lawrence of Arabia, To Begin the World Over Again.