The FTSE 100's strong recovery after the Brexit verdict in last June's referendum caught some investors off guard.

After an initial wobble, the index surged. Three months later, it was 10.4% higher. But why?

There may have been some other factors at play in those months, but one of the strongest drivers in the fortunes of the FTSE, the leading measure of UK stock market performance, was the direction of the pound.

This is because such a large proportion of profits for FTSE 100 companies is made in dollars. If sterling weakens then dollar revenues, once converted back into sterling, are worth more.

How the FTSE 100 has risen as sterling has fallen

Source: Schroders. Bloomberg data as at 13/03/2017, showing sterling vs the dollar. For information purposes only. The material is not intended to provide advice of any kind. Information herein is believed to be reliable but Schroders does not warrant its completeness or accuracy. Past performance is not a guide to future performance and may not be repeated. There can be no guarantee as to the magnitude of any future market movements.

This effect has become more pronounced given the sheer volume of profits earned overseas.

As the chart below shows, 71% of revenues generated by FTSE 100 companies come from outside the UK. The strength of sterling against the euro is also important given the large chunks of revenue accounted for by France, Germany, Italy and other eurozone countries.

The inner ring illustrates that 97% of the companies on the FTSE 100 have registered head offices (i.e. they are domiciled) in the UK.

The outer ring is the important part. It shows the regions from which FTSE 100 companies generate their revenues. All but 28.9% are generated outside the UK. 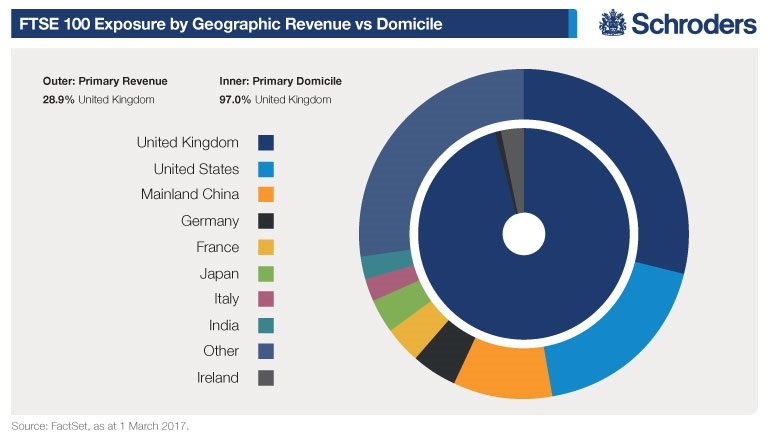 Advertising firm WPP is among a number of UK-listed companies which have recently announced that their earnings have benefited from sterling weakness.

It can have the opposite effect too. Engine maker Rolls Royce recently announced that its profits were being affected by a weak sterling exchange rarte.

The notion that a falling currency boosts the local stock market applies to most markets, but the extent depends on the market's reliance on foreign revenues. The FTSE 100 is a particularly strong example of this, with the dramatic effects of Brexit underlining the point in 2016.