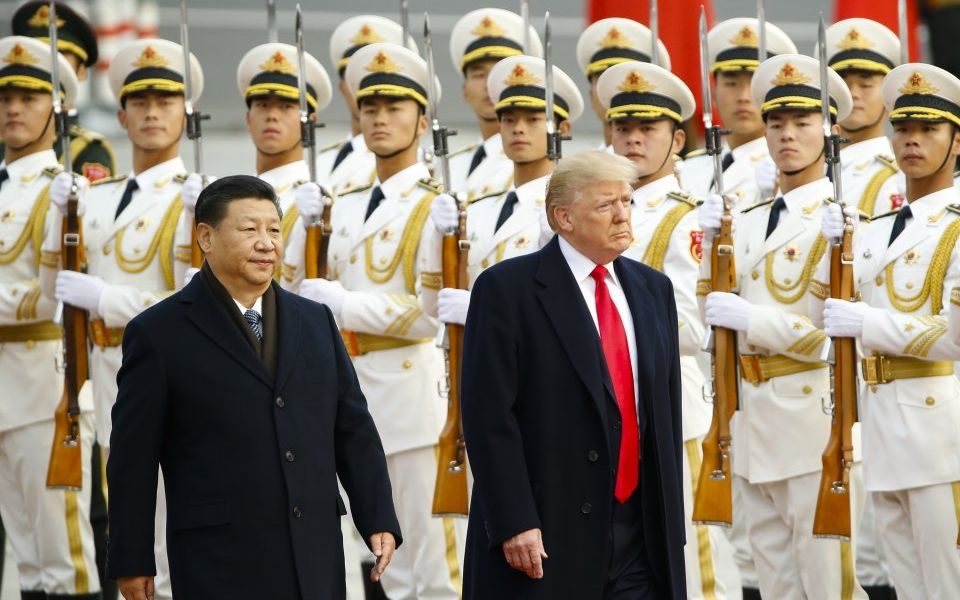 The US and China have been trading fierce rhetoric over the past two months, threatening to slap billions of dollars' worth of tariffs on each other's goods and services.

If the skirmish turns into a full-blown trade war could it threaten the global economic recovery?

While the current dispute between the two countries hasn’t officially been classified as a trade war the threat is real.

A trade war occurs when countries place tariffs on each other’s imports, goods and services coming into the country.

A country does this to make its own exports more attractive to overseas buyers and to improve the balance of trade. Many countries, such as the US, suffer a trade deficit, where the balance between goods being bought into the country (imports) exceeds the goods being sold out of the country (exports).

In the case of the US and China, the trade war rhetoric ramped up at the start of March 2018 when President Donald Trump announced general tariffs of 25% on imported steel and 10% on imported aluminium. His declared motive was to help cut the US’s trade deficit: the US imports more than it exports from countries such as China and Mexico.

The US went a step further in April 2018 when it specifically targeted China. It announced plans for tariffs of 25% on $50bn-worth of imports from the country including aerospace, information and communication technology and machinery, with a final list due by 15 June 2018.

China declared that if the proposed tariffs were implemented, it would retaliate with 25% tariffs on $50bn-worth of US exports ranging from scrap aluminium to apples. In reply President Donald Trump has asked the US Trade Representative to consider whether a further $100bn of Chinese products could be targeted with tariffs.

This is not the first time that the US has adopted so-called protectionist policies. Most famously Congress, the law-making branch of the US government, passed the Smoot-Hawley Tariff Act in the 1930s, which hiked tariffs on more than 20,000 goods and has been blamed for deepening the Great depression.

However, a decade earlier, the Fordney–McCumber Tariff of 1922 raised US tariffs on many imported goods to protect factories and farms, which didn’t prevent the boom of the 1920s that eventually led to the Great Depression.

The product supply chain is far more complex now than it was back in the early 20th century. Many goods and services rely on outsourcing and foreign imports to complete some part of the production process.

The danger is that tariffs could have unintended consequences, pushing prices higher and reducing demand on all goods, not just imported ones.

Many countries and companies outside the US and China could be exposed because of their interconnected supply and revenue chains, potentially putting global economic growth at risk. Here, Schroders emerging markets economist Craig Botham answers five key questions on trade wars.

1.) Which countries could be most exposed to a US-China trade war?

“Headlines have focused on the damage to China in the event of any trade war, but other emerging market (EM) economies could suffer almost as much. In some cases, governments in those other economies will lack the resources of Beijing, and will face greater domestic political pressure to act.

“There could be some economies less exposed to the first round effects of tariffs; the immediate damage is focused chiefly on EM Asia, while relatively closed economies such as Brazil and India should be more insulated than other economies in the event of a more global trade war.

“Furthermore, it is apparent that tariffs on Chinese exports are much more consequential for EM than those on US exports, and that the pain is likely to be concentrated in Asian EM.”

2.) How have stock markets reacted to the prospect of a trade war and can we read anything into them?

“Market performance since steel and aluminium tariffs were announced suggests only limited concern about trade tensions, with the global index grinding higher. However, compared to performance in 2017, gains this year have generally been mediocre, and much more volatile. Markets are perhaps not yet convinced that a trade war is inevitable, but they are equally uncertain that it can be avoided.

“There are of course multiple factors at work. The weakness in Chinese markets could be driven also by tighter credit conditions and concerns over slower growth, for example. There have also been doubts over the pace of global expansion which have weighed on equity sentiment.

“Nonetheless, trade concerns do seem to be taking some toll. For now the market seems to be betting that a trade war between China and the US can be avoided, but a glance at the Mexican stock exchange tells us that trade tensions can take a real toll when they intensify.”

Past Performance is not a guide to future performance and may not be repeated. Source: Schroders. Thomson Reuters Datastream. Stockmarket performance in local currency (US dollars for MSCI World) between 1 March 2018 and 5 June 2018. Data correct as at 05 June 2018.

“There could be winners from any tariffs. China and the US will need to replace supplies of impacted goods given the cost increase; as reflected by a surge in the price of Brazilian soya beans since China proposed a 25% tariff on imports of the produce from the US.

“Not all areas have the potential for significant gains; US whisky exports to China were around $6 million in 2016, a tiny fraction of any country's GDP. Still, the potential for increased market share elsewhere is meaningful. China’s tariffs on US goods will mainly offer opportunities to developed market economies who could look to replace the US as a major supplier of higher value added commodities, while other EM economies will hope to substitute for China as a provider of raw materials and components.”

4). How might consumers feel the impact of a trade war?

"Based on the proposed tariffs, the immediate price impact for US consumers should be limited. In general the US has avoided targeting consumer goods, so most of the effects will come through increased production costs for US firms. Ultimately, pricing power for companies seems somewhat constrained so this could limit the degree of how much is passed through.

"One possible exception to this is the more recent threat from President Trump to impose a 25% tariff on vehicle imports, which would translate immediately into price increases for the end user.

"On top of possible price increases, it seems likely that tariffs would weigh on growth. Producers unable to pass on cost increases, for example, will generate less profit and so could choose to reduce production. On a large enough scale, this could ultimately filter through to reduced growth in employment and wages."

5). How close are we to an all out trade war and what do you anticipate happening next?

"At this point, the tariffs look like both sides setting out a bargaining position with the aim of doing a deal further down the road, though 15 June 2018, when the final list of tariffs is due, will be a key date.

“If it does escalate into a full trade war between the US and China the implications are clearly bad for the world economy with global growth likely to be weaker and inflation higher.

Important Information: The views and opinions contained herein are of those named in this article and may not necessarily represent views expressed or reflected in other Schroders communications, strategies or funds. The sectors and securities shown above are for illustrative purposes only and are not to be considered a recommendation to buy or sell. This communication is marketing material.