Westminster promises "major powers" to stave off Scottish independence: but what is devo max? 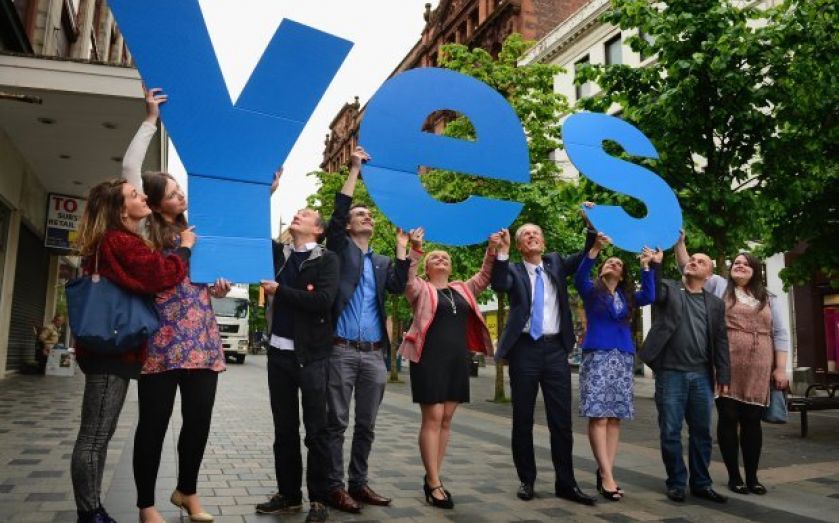 The three main parties have promised to transfer “major powers” to Scotland the day after the referendum takes place if voters decide to stick with the union.
By the end of January, a draft law will be ready to vote on by parliament, the Better Together campaign announced today.
The campaign claimed:

This provides the certainty people in Scotland need. This means we can have what the majority of Scots want – more powers for Scotland without taking on all the risks of independence. It’s the best of both worlds for Scotland.

Devo max was once the scourge of Westminster while it was the favoured option of those north of the border. With polls suggesting at best a narrowing of voter opinion, and at worst a marginal lead for the Yes campaign, those arguing we would be Better Together are hoping this last ditch attempt to keep the union intact will work.
The campaign said:

Contrast the certainty we have over more powers for Scotland with the risks and unanswered questions of separation. We have no idea what currency a separate Scotland would use, how pensions would be paid or what would happen to the money we have to pay for our NHS.

In fact, the Yes campaign is pointing out that if certainty is what voters want then they should probably stick with them, because there is no guarantee that these laws will be passed, but that is not what the Better Together (otherwise known as 'No – thanks') campaign claims:

The biggest risk to the future of Scotland is separation.

But what exactly is devo max?
While there seems to be no hard and fast definition, pundits have previously dubbed it “fat free independence”.
Effectively it gives the powers of a separate nation, such as taxation and welfare, and all the elements that come within, while still coming within the UK for issues such as defence and foreign affairs.
That's on top of the powers Scotland already enjoys, such as borrowing, income tax, landfill tax and stamp duty, education and so on.
In practice, instead of receiving a block grant from the UK as is the case currently, the Scottish Parliament would receive all taxes levied in Scotland, which it could distribute as it sees fit – although it would have to contribute to the Westminster pot for UK-wide services including defence.
Cameron and the other party leaders have in the past spoken out against devo max (Ken Clarke once said it would be "disastrous" for Scotland) but now they are pushing it as a genuine path. Westminster has also roped in their Scottish counterparts to issue a rallying cry on the back of their announcement.
Leader of Scottish Labour Johann Lamont said:

The Scottish people now have real certainty that a No vote is a vote for change and the uncertainty lies with the Yes campaign, who have no answers on currency, pensions and jobs.

This is the final death knell in the SNP’s scaremongering over the NHS. With this clear delivery plan for more powers, leading to much greater control over tax and spending, we in Scotland can confidently guarantee the future of our NHS. Alex Salmond's lies and alibis won't wash in a world where the Scottish Parliament has the powers to decide how much tax to raise and how much to spend.

We need a Scottish Parliament that looks taxpayers in the eye. That's why we need more powers. People want to see a timescale for change and now we know that the plan for action starts immediately after a No vote.

I was delighted by Gordon Brown's intervention yesterday which adds the political weight that only a former Prime Minister of his calibre can provide. This unstoppable momentum for change means that people can be confident that vote no will open the door to substantial transfer of power on tax and welfare.
This is the change that people have told us they want and we are going to deliver it.