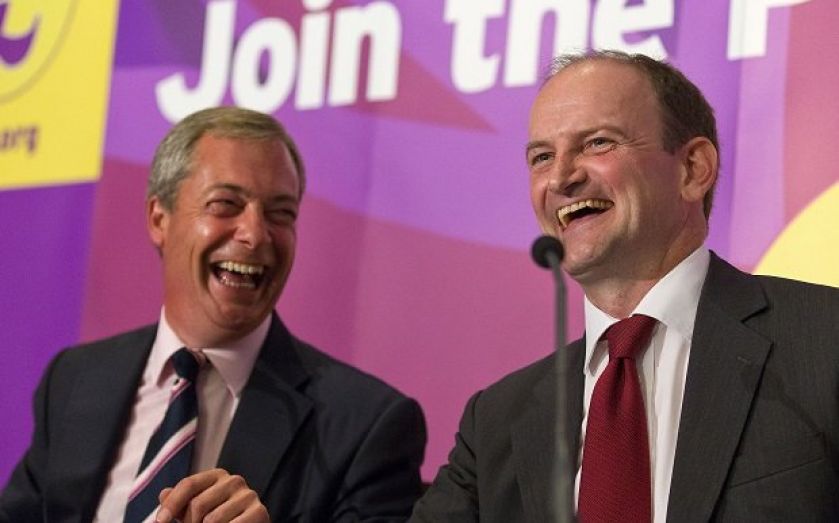 David Cameron is facing a major defeat in the Clacton by-election after polling for the Mail on Sunday revealed Ukip were set to win the seat with 64 per cent of vote.

The by-election was triggered after the prominent Conservative MP Douglas Carswell switched parties and decided to put himself at the mercy of constituents rather than wait till the 2015 general election.

The survation poll makes dire reading for the Tories with a predicted 48 per cent swing towards Nigel Farage's anti-EU party. Ukip currently stand 44 percentage points ahead of the Conservatives in the Essex seat. Should the poll hold up on election day it would be the biggest anti-Tory swing since 1993.

The Conservative party is hoping a wave of activists and ministers will be able to stop Carswell from turning a 12,000 Tory majority into Ukip's first elected seat in Westminster. Furthermore, not even London Mayor Boris Johnson could stop halt Carswell's seemingly inexorable path to victory, according to the poll.

Should there be a match-up between the two, Johnson would win 27 per cent of the vote while Carswell would romp home with 60 per cent. Carswell's seat is prime Ukip territory with many disaffected Conservative voters and older working class eurosceptics and half of voters in the constituency listing immigration as their top concern. Carswell also retains a strong personnel following in the constituency.

In news that could bode badly for the Tories chances of victory at the general election 70 per cent of those polled said David Cameron's argument that a vote for Ukip would put Ed Miliband in number 10 had no effect on them.