Trump forfeited the respect that the presidency deserves 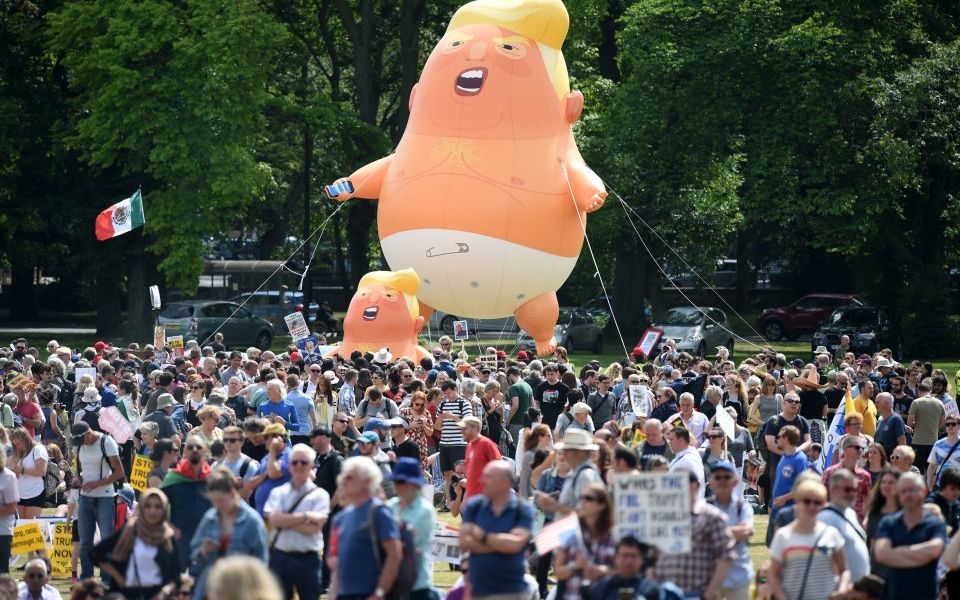 Show respect for the office, if not for the man. This was the finger-wagging admonishment heard across the UK this week, as the President of the United States graced our tiny island with his presence, and was greeted by crowds of protesters.

President Trump, these protesters were sternly reminded, is the leader of the free world, while America is one of Britain’s greatest allies.

The President was visiting to commemorate the tremendous shared sacrifices that our countries made 75 years ago on D-Day. The historic ties, the gravity of the anniversary, and the prestige of the office of the presidency should have evoked a mood of national awe, even if people harboured some criticisms about the individual himself.

The protests, along with the less-than-deferential reactions of some politicians, were unbefitting of a country hosting the head of the world’s greatest superpower.

There is just one problem with this version of events: Donald Trump’s conduct both before and during his trip was that of a man visiting Britain as himself, not as a state official. And if anyone has disrespected the office of the presidency, it is the individual who now holds it.

First, a word about the ugliness seen on London’s streets. Videos emerged showing some anti-Trump protesters behaving horrifically, harassing fans of the President in a way that verges on violence. Other reports then surfaced that seemed to suggest the altercation was more two-sided than it initially appeared.

Regardless, it is sadly true that peaceful demonstrations – whether concerning Brexit, climate change, or geopolitics – appear to have an increasing tendency to turn nasty.

From throwing milkshakes over people with opposing views to screaming threats at politicians who are accused of betraying the country, none of this is acceptable or constructive in a civilised society.

Such behaviour should be condemned outright, regardless of the motivations of the perpetrators.

But as for the rest – childish balloons and crude representations of Trump, explosive signs mocking some of his most controversial outbursts, people dressed as characters from the Handmaid’s Tale to protest the attack on women’s rights under his administration – these are the hallmarks of free speech in the very kind of robust democracy that the soldiers on D-Day were fighting for.

These protesters were not belittling the contribution of Americans during the Second World War, nor the importance of the special relationship today. But if the significance of the occasion has been somewhat overshadowed, the fault lies squarely with Trump himself.

Just days before his visit, the President demonstrated why he is not worthy of the prestige usually afforded to a visiting dignitary.

In an interview with The Sun, he waded into UK politics, throwing his support behind Boris Johnson in the leadership contest, and readily acknowledging that in his mind this could tip the scales (“I could help anybody if I endorse them”).

They would have been accused – rightly – of breaking all diplomatic norms and shaming their country.

Trump, of course, is different. This faux-pas barely registers on the ever-growing list of conventions he has ridden roughshod over at home and abroad: appointing family members, hiding business ventures that pose conflicts of interest with foreign policy, attacking opponents in the most crude and personal terms, inventing policy via tweet, trying to meddle with a federal investigation, and repeating known falsehoods before lambasting the “fake news media” for reporting that they are untrue.

We got a crystal-clear example of the latter before this week’s visit, when the President went after the Duchess of Sussex. In the tape of the Sun interview, he can be heard referring to Meghan Markle as “nasty”.

Leaving aside the fact that no other leader would ever publicly insult a member of the host nation’s royal family, Trump then went fully Orwellian while in the UK, and flat-out denied ever making the remark.

We are used to politicians stretching the truth, but outright lies that can be categorically disproved are another step entirely. Yet there is a reluctance among politicians and journalists to call such lying what it is, lest they are accused – again – of disrespecting the President.

This Catch-22 has been one of Trump’s most successful strategies since he first launched his political career. However outrageously he acts, from joking about assaulting women to mocking people with disabilities, he knows that his supporters will flock to defend him, using the norms of civil society that he himself has broken to browbeat those who dare to call him out for it.

This President has denigrated his office, failing at every turn to rise above petty politics and treat the job with the consideration that it deserves. His advocates cannot then feign surprise when citizens on both sides of the Atlantic voice their discontent with his decidedly unpresidential behaviour.

In showing such contempt towards the great office he holds, Trump has forfeited the right to any reverence that his rank might traditionally bestow. Respect must be earned. And even in his brief visit this week, Trump displayed abundantly why the British people were fully justified in withdrawing theirs.