A true original on Clink Street 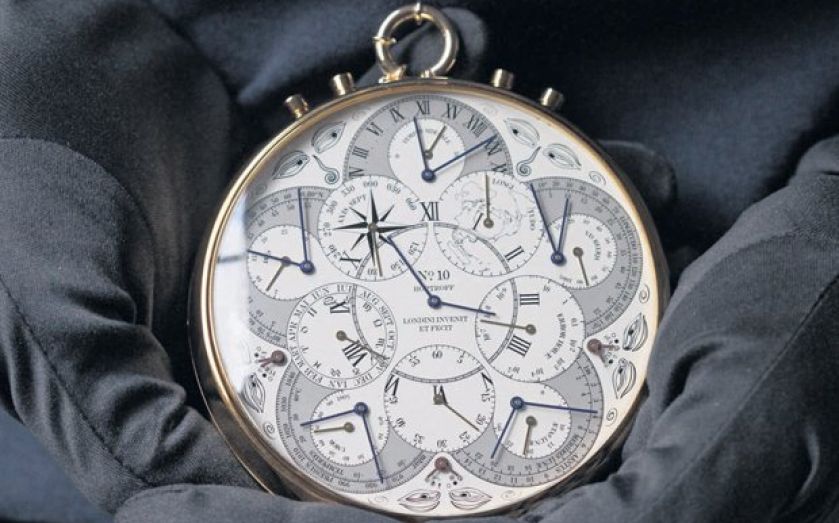 From the world’s first atomic pocket watch – the most accurate portable timepiece ever – to a wristwatch that reads the stock market, start-up Hoptroff London is taking timekeeping in new directions. And all from the Southwark studio of one ambitious inventor. Timothy Barber reports Up a worn flight of stares in an old warehouse on Clink Street, that cobbled Southwark alley that seethes with dark history (and tourists), a revolution in watches is taking place. That’s the intention, anyway, of Richard Hoptroff, a physics Ph.D and entrepreneur who for the last few years has been salted away in a workshop-cum-garret here, dreaming up new ways to tell the time. Not just the time, in fact. Hoptroff’s nascent watch company, Hoptroff London, is to be the birthplace for myriad never-seen-before horological functions, from managing diary appointments to predicting the weather, to – and here’s the clincher for the City – monitoring shares on the stock markets. These are each displayed in the most classical manner, as though designed by Breguet for a 19th century pocket watch: the stock market piece – the Hoptroff No 9 – for instance, has a line of numbers that snakes its way between the roman numerals on the dial, where you can read if a stock has gone up or down (on a scale of +10 to -10) by close of trading; the watch also offers a date display and a second time zone. In the centre of the bottom half of the dial, as on all his timepieces, is the legend “Hoptroff Londoni, Inv & Fec” – the last part short for “Invenit & Fecit”, or invented and made in London. The No 9 may look like the most old-fashioned timepiece, but the innards are high-grade electronics developed by Hoptroff himself, using Bluetooth technology of his own devising. His bread and butter up to now, in fact, has been supplying Bluetooth firmware to other large businesses. The fact that it’s all out of the chaotic Clink Street studio – part of which he sublets to artists, meaning visitors may tread on watch parts or paint brushes at any moment – is all the more impressive and bizarre. “It’s a real ‘sell the house to fund the dream’ story,” Hoptroff says. “My wife and I lived in Paris before, in quite a smart neighbourhood, running tech start-ups. And then we decided to come back three years ago, and put everything into the watch brand. “Apart from the components, the major investment has been my time.” Hoptroff puts that estimate in the six-figure bracket. One benefit of such technological nouse is that it can really be applied to any kind of reading. One suspects that, in the long term, this could give Hoptroff considerable opportunities in the creation of made-to-order timepieces with one-off complications. But if launching a high-grade watch brand based on Bluetooth tech from an atelier in Southwark all seems madly ambitious, Hoptroff probably wouldn’t deny it: he thinks on a relentlessly ambitious scale, and it’s that that makes his endeavours so heroically fascinating. For instance, such is his commitment to melding new technology with the classical horological culture that he loves – he idolises the great, late British watchmaker Dr George Daniels, and once designed and hand-made a mechanical table clock with no less than 30 complications (it sits in his office) – that he’s having the classical cases of his watches 3D printed. In gold. As far as can be confirmed, he’s the first to deploy the precious metal in this way in watchmaking, achieving a case architecture that would otherwise be impossible. But if all that wasn’t enough, there’s a world first Hoptroff has achieved that’s on an altogether more remarkable scale: he has devised, and built, the world’s first ever atomic pocket watch. Which is to say, the most accurate portable timepiece in history by miles, containing a matchbox-sized CSAC device, or “Chip Scale Atomic Clock”. This is a tiny caesium gas chamber inside a 130ºC oven, in which atoms are stirred up by a lazer and a microwave resonator measures their atomic transitions. It was developed for use in cruise missiles, but Hoptroff has developed a method to deploy it inside a stupendous gold timepiece (not 3-D printed): the £50,000 Hoptroff No 10. What started as a side project inspired by a trip to the Greenwich Observatory has fast developed into the major event of his launch. “This is the first time an atomic time source has been used in a pocketwatch movement,” he says of the No 10, which will be accurate to within 1.5 seconds over a thousand years. Into this atomic package he has poured his other techy know-how to create a virtuoso classical-modern pocketwatch with – and why not? – 28 hands giving 28 different Bluetooth-derived readings, from tide height to longitude/latitude to humidity to moon phases. There’s nothing else like it to be found, no question. One imagines he’s drawing up plans for the Flux Capacitor watch already… Hoptroff London is launching at SalonQP watch exhibition this week, see page 28 for full details. Hoptroff watches are £5,000 plus VAT. hoptroff.com