Trans belonging from the boardroom to the bathroom 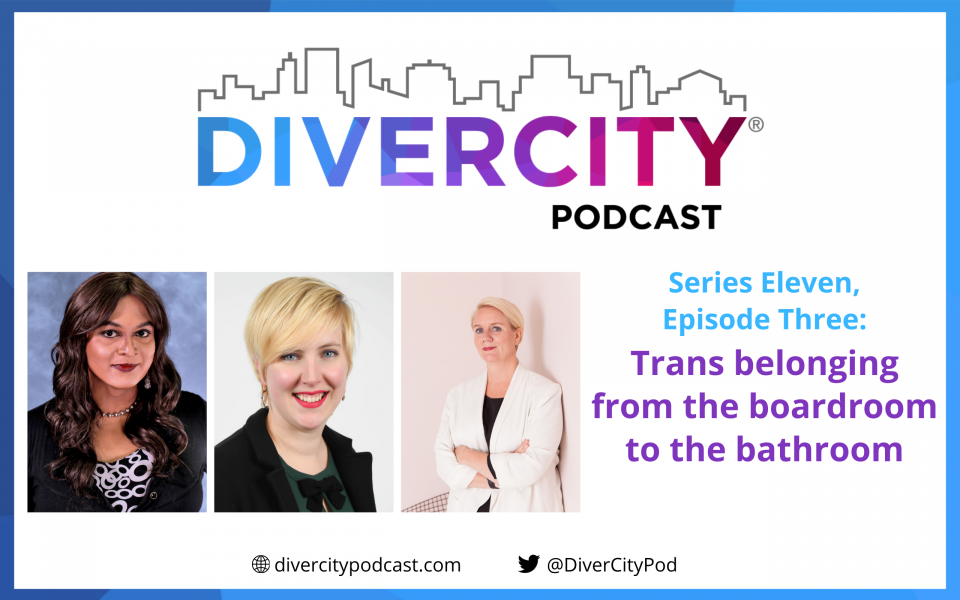 DiverCity® Podcast · Trans inclusion and Belonging: From the Bathroom to the Boardroom

There are some voices whose experience and stature demands they be heard, and whose expertise and actions are driving change at some of the world’s biggest organisations.

In the latest DiverCity podcast, I was joined by Celia Daniels, an Asian-Indian, non-op trans woman of colour. As a management consultant with Fortune 100 companies, she educates, empowers and advocates for transgender and gender non-binary individuals in the business world.

Joining her was Meaghan Crockett who works on the Domestic Violence Support Team and is the lead of the Transgender and Gender Identity Support Team at Bank of America.

But despite holding senior positions with considerable access, both Celia and Meaghan’s work is simple: empowering transgender people and educating workplaces on how best to accommodate gender non-binary individuals.

Transgender inclusivity is not just about having appropriate bathroom door signage but ensuring there is a fair and inclusive structure in place to ensure gender non-binary people have the same opportunities as the wider business.

Celia says her role is based on “building true allyship and partnership with companies at all levels”. This includes education, inspired by Celia’s belief that: “change happens from the hearts of the employees and not from the letterhead of a company”.

Likewise, Meaghan’s role is focussed on education, whether it’s about specific elements of healthcare coverage, providing whole teams with valuable teachings, or fostering an internal community of trans people.

Bringing these conversations to the core of some of the world’s largest businesses is integral to ensuring that employees have access to the kind of education that will result in proactive allies, making sure that corporations can foster a sense of belonging for transgender employees.

But more than anything else, Celia and Meaghan are proving that the biggest corporations can embrace transgender employees and provide a supportive environment where gender non-binary people can excel.

Meaghan says that discussions around diversity and inclusion, including around gender non-binary people, should be high on the corporate agenda.

“When employees feel included and are part of the conversation, and when their identities, that are often overlooked, are thought of as important and are interesting, they’re asked about what they think about – they are shown that they have value,” she says.

Meaghan adds that these board-level discussions have wider benefits. Transgender people, often overlooked at companies without inclusivity ideals, “want to work for companies and show their value, that show that they have something that they can bring to the table. It makes us better as a company, as a community, and as a world.”

Celia, too, says that a shift in corporate attitudes requires a contribution from everyone, and allyship, along with education, is paramount.

“The word allies is, A, acknowledge your privilege, L, listen to the voice of our community, the other L is to learn to unlearn. I is to instigate tough conversations and E is to educate by understanding what we’re going through. S is support by being involved.”

This is what makes the work of Meaghan and Celia so important. Bringing these ideas to both Fortune 100 companies, as well as one of the largest financial institutions in the world, will go a long way in establishing a culture where inclusivity is normalized – not just in terms of actions taken but in how an organization sees diversity and how they can embrace it as a tool to facilitate success.

“Be wonderful allies,” says Celia, “we need you. This is a world where we are all in this together. We need to hold each other’s hands and support each other, especially as we are going through these tough times.”

Employer responsibility is not just about meeting diversity targets or having sufficient representation – it is about harnessing a culture of responsibility, empowerment, and togetherness. More than a performative act, it provides psychological safety to minority groups, including gender non-binary people, and is intrinsic to overcoming institutionalised issues within the financial world.

And if some of the largest corporations in the US paying serious attention to the issue, the question leading executives must be answering is why isn’t this the new normal already?

The responsibility to embrace inclusivity falls to every one of us. Becoming an ally doesn’t begin with a corporate seminar, but with what you can do to be a valued colleague, friend and supporter.