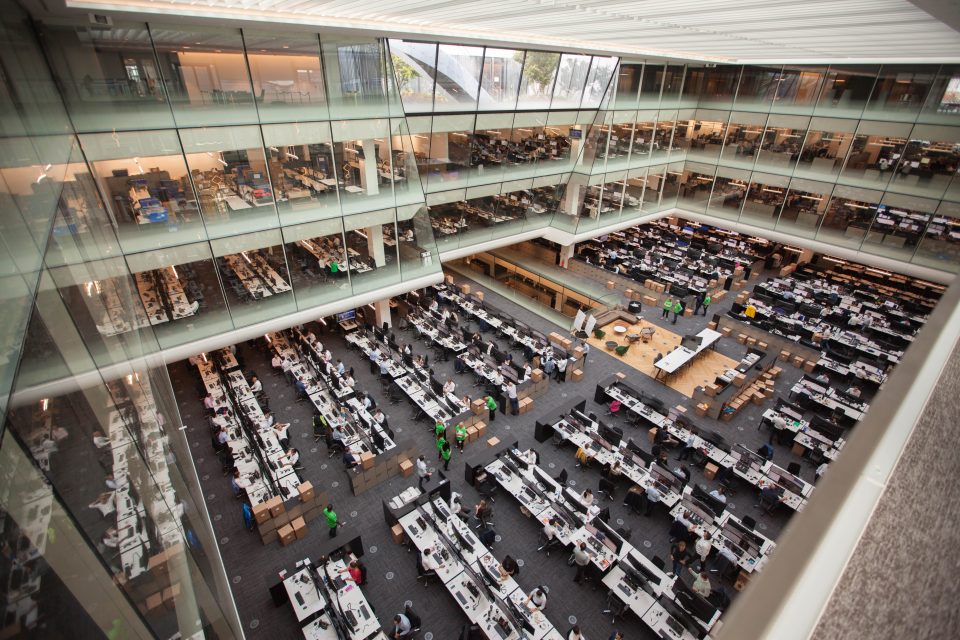 For Goldman Sachs bankers used to living life in the fast lane, the slow lifts at their recently-opened London HQ are a new source of frustration.

“Don’t get me wrong, the place is great, but it takes two minutes just to go up a few floors,” grumbles one employee.

Read more: Why Transferwise denied a staff request for a slide in its modern, grownup offices

“[The lifts] are probably the biggest gripe” adds another. “They also changed my favourite salad bar – it had such liberal portion control that I’m guessing it was a loser for them.”

The designers of the new Goldman Sachs nerve centre can perhaps be forgiven for not placing priority on the speed of their lifts, so busy must they have been in creating the rest of the £1bn complex.

From therapy rooms to nurseries, exquisite client offices to vast trading floors, Goldman’s latest base is designed to be the ultimate workspace for bankers.

It even has beds for dealmakers pulling 18-hour shifts.

On the Friday morning we visit, however, there is a problem with the kitchen on the ground floor; a faulty ventilation system means its dining hall has an overpowering smell of fish and chips.

Read more: The next BoE governor must be prepared for a political storm

“You couldn’t make it up,” laughs Goldman’s global head of workspace Mike Taylor.

Across more than 1m square feet of space covering 10 storeys, Goldman has finally brought together its 6,500 London employees under one roof in Farringdon.

“The two key things for us were light and connectivity,” says Taylor as we start our tour. “If you get those design principles right you can build in the flexibility”.

The ground floor windows at Goldman Sachs are huge; three times bigger than those of their neighbours at Deloitte across the road. But from the outside, the glass structure is blacked out.

Beefy bodyguards minding the entrance and a lack of any company sign outside add to the clear impression that the bank does not want unwelcome visitors.

Yet Taylor says the lack of nameplate has nothing to do with security: “If someone wants to find us they can. We’ve just always looked to be more discreet and understated”.

We start our circuit underground in the bike shed, which feels more like a trophy room.

Hundreds of expensive-looking bicycles are kept here every day.

Moving up the building, we take a look inside the gym; a bright orange and white room with weights, rowing machines and every other facility that bankers may need to work off a life of long hours and intense pressure.

Before we reach the firm’s working floors, we take a trip back to school.

Goldman’s child centre has pet fish, a climbing wall and a play area.

Toddlers in the baby room stare up at us.

“We’re already giving them classes in futures trading”, jokes one member of staff.

We get back in the lift and head up towards the heart of the money-making machine.

London’s largest trading floor is quite the sight to behold.

Hundreds of employees equipped with headsets sit in front of wide curved screens, glued to the latest market movements.

It has a distinctly US feel; one trader is fiddling with an American football and several are wearing big gilets straight out of Showtime’s Billions.

Scribbled on a whiteboard is the line: “If you don’t like change, you will like obsolescence even less!”

For a bank facing industry disruption, global turmoil and a management-shake up, the sentence seems particularly apposite.

The two trading floors of equities and fixed income are more like great halls than rooms, made almost church-like by a flood of natural light pouring through massive windows.

We can look down at the trader bees from the top floor, where Goldman’s executive office and client rooms are located.

From plush carpets to shiny boardroom tables, no attention to detail has been spared for the top dogs.

Execs have quick access up a few steps onto Goldman’s rooftop – a paved terrace with flower beds that is often opened up for dinners and drinks in the evening.

The scale of amenities seems almost frivolous for a bank that prides itself on advising others how to spend their money wisely, but it begins to make sense when seen in the context of the firm’s decade-long campaign to restore its image.

By the end of 2007, the bank was Public Enemy Number One.

Its ability to turn a profit during the one of the greatest economic crises, coupled with its close ties to a government that bailed out much of Wall Street, provided critics with easy ammunition.

Even more than 10 years on from the financial crisis, some of its reputational wounds are still sore.

The now famous Rolling Stone magazine insult – that Goldman was “a great vampire squid wrapped around the face of humanity, relentlessly jamming its blood funnel into anything that smells like money” – seemed to strike a chord among the public.

“Goldman was often criticised but the top brass particularly hated the Vampire Squid reference because it was made in a hip magazine read by the young Ivy Leaguers that they were trying to recruit every year,” recalls a senior City figure and long-time close observer of Goldman.

Hiring Ivy Leaguers and their fellow graduate elite from across the world had always been one of Goldman Sachs’ selling points.

Clients backed the firm because they knew that the bank had first dibs on the brightest graduates coming out of business schools.

Over the last decade, however, investment banking has seen some potential recruits looking elsewhere.

Many have chosen Silicon Valley over Wall Street, preferring a Google campus to a Goldman trading floor.

Whether it’s with the vegan food bar or the gender-neutral loos, the child play area or the high-tech gym, Plumtree Court underlines the concerted effort being made to revive Goldman Sachs’ appeal among a new generation of professionals.

Taylor and his team have done an impressive job of making the bank’s European headquarters a state-of-the-art office unrivalled by its peers.

Now they just need to sort out the smell of fish and chips. And maybe the lifts.