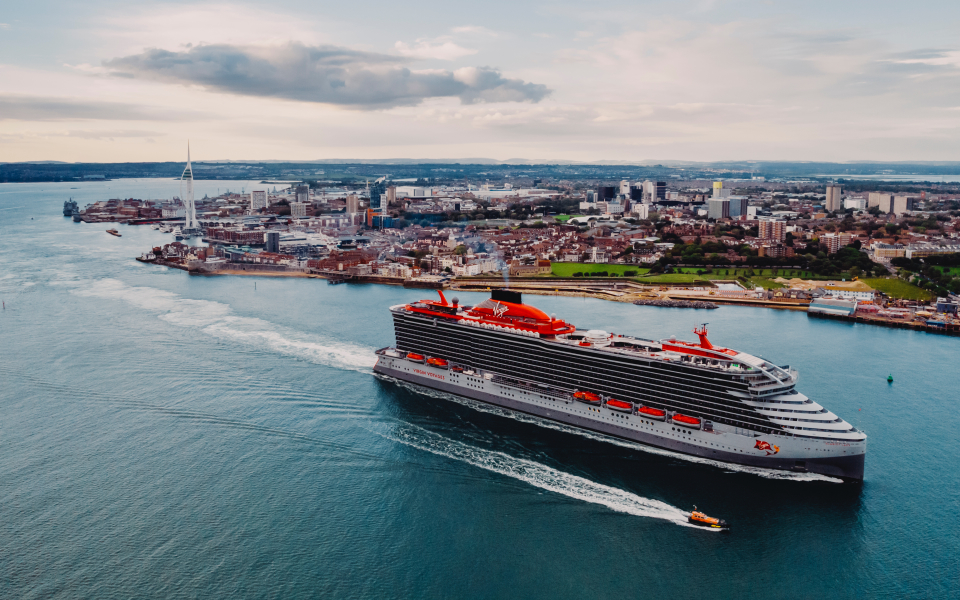 At the London launch of Richard Branson’s new cruise line, Virgin Voyages, the British DJ and producer Mark Ronson played a raucous set. It was all very cool and glamorous, and promised a new hip addition to this most buoyant travel sector, with more than 100 cruise ships on the order books. So when the Virgin Voyages’ Scarlet Lady set sail to test the waters in the UK, before her home cruising ground in the Caribbean, I packed my dancing shoes for a new kind of floating resort.

The Scarlet Night party is the centrepiece of each voyage, where “sailors” (not “cruisers” as a point of difference to what’s gone before), are invited to wear a flash of hot red. To kick off, one of our group invited us to his Scarlet Night soiree in his swanky Gorgeous Mega Rockstar Suite before dinner. These suites are made for entertaining, underlining the £500m Scarlet Lady’s credentials as a group holiday destination as well as one for couples and singles.

There are, in essence, three classes of cabin (1,408 in total) – those inside the boat without a window, which are primarily crash pads; those on the Sea Terrace, with or without a balcony; and the various Rockstar Suites. Navigating my way to deck 15, suite 15283A took some finding. But here our “roadie” (or butler), Eugene, was prepped to escort me.

Inside the Rockstar Suite were decks and  a pile of vinyl, bowls of nibbles, and a drink’s cabinet with barware and crystal glasses, primed with spirits included in the fare (from $2,550 per four-night voyage; a Sea Terrace cabin for two costs from $975). I spied a half bottle of Moet and wasn’t shy about picking it out. I’m sure Eugene would have come in to make us cocktails if we’d asked him. Elsewhere in the suite was a marble bathroom and outdoor shower. There are cheaper suites (from $1,550), and they all give access to the ship’s spa, which is otherwise $70 day.

Afterwards, I was booked in to dine at Test Kitchen, one of 23 eating and drinking venues including some cracking high-class restaurants (at no extra cost) that would hold their own in London, plus counters serving everything from tacos to ramen to sushi, to all-day breakfast, to posh ice cream. There’s no “cruise ship buffet”, partly for health reasons and partly because Virgin realised they create mountains of food waste, with guests hitting the dishes with such gusto that they end up with “chaos” on their plates that would horrify the chef.
Test Kitchen serves the ship’s tasting menu, with wine, beer or cocktail pairings. All food on the ship is free; drinks are paid-for. On our sailing there was good-humoured high spirits but no obvious drunkenness. Waiters wear lab coats, and tables glitter with rows of glassware reflected in myriad mirrors.

The ship’s main show, Dual Reality, is a spectacular circus/aerial/modern dance performance that was truly heart-pounding and wonderous. Awesome indeed, and although many cruise ships include aerial shows, the consensus was that this is the best of its kind.

On the first night I ate in Razzle Dazzle, a  primarily vegetarian restaurant that I was disappointed to learn serves meat on its “secret” menu. The mad décor is based on warships’ “dazzle” camouflage paint, and it was the only eatery I that turned me off; the art-deco beauty of The Wake was my favourite.

Scarlet Lady’s home port, from October, will be Miami, with short cruises into to the Caribbean and back, stopping at Virgin Voyages’ own private beach club. Then, in March, Valiant Lady launches for her voyages in Europe – itineraries I have my eye on.

And so to Scarlet Night. The shenanigans kicked off in the Red Room, a giant red box of a venue. I seemed was a tad early, the empty dance floor ringed by a single row of people. I was instantly transported back to my school disco, something I’d not thought about in years. I beat a hasty retreat, only to be met by a wave of people led by the dancer Jason, whose “back to the Eighties” show had been a massive hit earlier in the day. Back I went, music pumping, dancing the night away and hitting the after-party until the wee hours. Scarlet Night, tick!

I had sensibly planned a slow start the next morning, with a room-service breakfast ordered for 9am. My egg-white frittata, fruit salad, date-and-almond protein bar, tea and coffee were all cleverly packaged in a nautically appropriate “dry bag”, waiting for me outside the cabin underneath the “do not disturb sign”.

Regular cruisers I met were emphatic that Virgin Voyages is different to other cruise lines – there’s no main observation lounge, for instance with many intimate spaces flowing together, each with its own individual, colourful and characterful identities. The décor is Insta-worthy, even gorgeous at times, in contrast to the rather utilitarian outdoor spaces, particularly the top decks with the pools, hot tubs, sports equipment, loungers and day beds, which represent something of a missed design opportunity. This is never more apparent than the “VIP” sundeck ‘Richard’s Rooftop’, which was rather grim. Kelly Hoppen would have a meltdown.

Still, there’s no denying Branson has something with this new concept – there’s a playful energy that runs throughout, the promise of fun to be found around every corner. Its classic Virgin, really: kitsch, sexy without being gratuitous, carrying the air of luxury but still a mass market proposition. All aboard!

Scarlet Lady prices start from $725 per cabin (for four nights, plus flights) to the Caribbean from Miami, from October 6. Valiant Lady launches for European sailings in March. For all dates, prices and destinations visit virginvoyages.com.