It's the stuff of dreams for those of us who spend our days toiling in grey offices, badly-lit offices. While we're trying to find a modicum of joy during a break-time chat around the water cooler, this lot are sliding and table-tennising their way to creative nirvana.

How did its judges decide what constitutes a "cool office"? According to the company, "extraordinary features can't hurt".

Those organisations boasting not only first class product innovation, but also amazing company cultures and stunning, creative offices have well and truly earned their place.

Intrigued? Here are the companies you're going to wish you worked for….

Some companies might have trouble extracting the truth about why workers show up late, but ad agency Wieden + Kennedy has made the truth part of company culture, after it built a row of confession boxes inside its offices, "for meetings, brainstorming and [as] private workspaces for its creative teams to concoct those award-winning adverts". W+K workers are no strangers to unusual office spaces: in 2013, it installed a monochrome workspace made of paper and card in the window of one of its offices, stuck a sign on it saying "real-life designer at work", and made its workers take it in turns to use the space as passers-by ogled them while they were working. There was even a live stream. 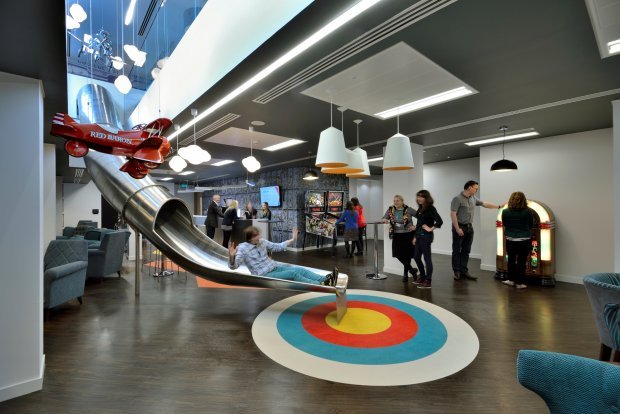 Bosses at the ticket reselling site have gone for more traditional "cool office" features, with a slide, jukebox, pinball machines and a bar-cum-meeting space known as The Imperial, which workers use to "relax and socialise after office hours". The company also takes its employees' wellbeing pretty seriously, with a fitness studio which has a "full fitness programme", plus a chill-out area called The Sanctuary, where it offers 20-minute massages. Lovely.

We've all had one of those days where a beer at the end wouldn't go amiss. For workers at deals website LivingSocial, it's merely a matter of pulling their own pint: their office features a fully-stocked bar, a grass meeting room complete with mega-bean bag and even a "picnic-themed breakout space". A training room contains "classroom seating, a rustic oak effect vinyl floor, a vintage teacher's desk and chair", and even a blackboard. Just make sure there's no talking in class.

It's fitting that Bold Rocket should have a 3d-printed rocket hanging in its foyer, seeing as it's an offshoot of technology giant Capco. But that's not all – its loft-style workspace includes utilitarian ping pong tables and a "living wall", designed to simulate billowing smoke from the rocket.

The London offices of real-time data provider Splunk are decidedly geek chic: not only do they include a Tardis-style demo room, where "Splunkers" demonstrate their products to clients, it also has a section of a full-sized Pullman train carriage, which doubles as a meeting room. The office, which features bare bricks and steal, also has custom graffiti and a row of phone booths "tucked behind old style front doors", just in case staff want to make a private phone call.