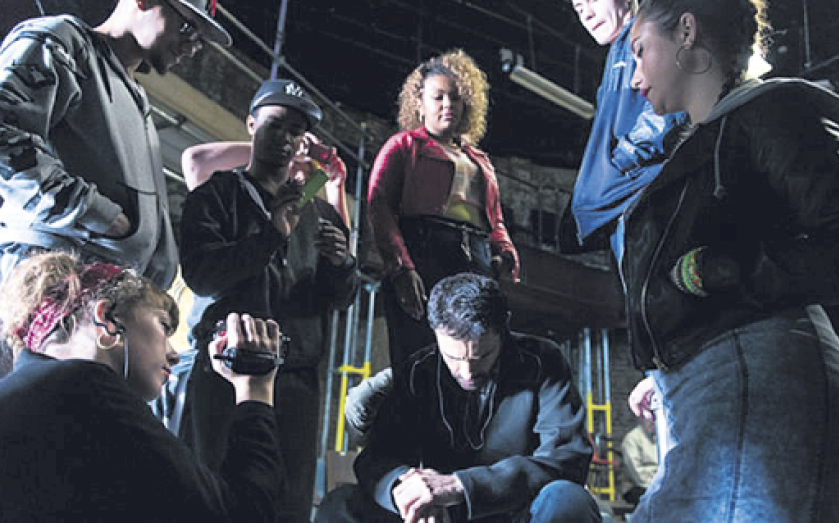 Is there anything left to say about the riots? Despite the avalanche of think-pieces chewing over possible causes – from the left: poverty, racism, a lack of opportunities; from the right: irresponsibility bred by welfarism and failures in state education – no one provided a wholly satisfactory diagnosis. The riots were simply too big, too unruly, too mad to fit snugly into one ideological narrative. Just as well then, that Alecky Blythe's new play doesn't say anything about the riots. Rather, it is the riots.

Let me explain. Little Revolution is a verbatim play. Every single line was recorded on Blythe's dictaphone either on the night of the riots  (she was there in Hackney, in the eye of the storm) or during community meetings in the subsequent days and weeks.

A universally brilliant 32 strong “community chorus” of actors play the characters in the recorded snippets of dialogue. Blythe – the interviewer – plays herself. When we first meet her she is a terrified (and thrilled) witness to the stealing and burning taking place near the Pembury Estate in Hackney. We hear her nervily quizzing track-suited kids as they emerge from the local newsagents, bundles of loot in their arms. The atmosphere is heady, charged, exciting.

Then it cuts to a community meeting between a local councillor, a priest, a do-gooder middle-class couple (who live on a gentrified square next to the Pembury Estate) and a business owner. Blythe, who explains she's doing research for a play, sits in, dictaphone in hand. The aim of the meeting is to work out how to help Siva, the Sri Lankan owner of said newsagents, who wasn't insured and now faces bankruptcy, his shop having been destroyed, his stock stolen. A “friends of Siva” fundraising campaign is set up to help the shop-keeper get back on his feet. This attracts journalists on the lookout for uplifting human interest stories, and Marks and Spencer, who provide cakes for a fundraising bakesale. All the while, kids from the estate are being arrested in their droves.

There's an amusing juxtaposition between the cosy leftism of the do-gooder couple and the violent, super-charged chaos of the riots themselves. Later, residents of the estate are openly resentful of the bearded Hackney gentrifiers' floaty ideals, viewing their help as a self-indulgent and patronising attempt to assuage their own middle-class guilt. These feelings lead two Pembury mums to set up their own campaign “stop criminalising Hackney youth”, which they protect jealously from the middle-class across the road. This is when you realise the main story of Little Revolution – and perhaps the main story of the riots? – isn't simply poverty, or unemployment, but the virulent strain of gentrification that's infected London over the past 10 years.

The play reveals a hidden selfishness behind many actions undertaken on behalf of “the community”, and leaves you wondering whether the very idea of community in this context is dreamt up to salve the conscience of middle-class colonisers of formerly run-down areas. Blythe puts herself on trial as well, gamely including her own sometimes facile interjections. After all, she is a gentrifier, too, and she – as a white, middle-class playwright making art out of the destruction – has her own guilt to assuage.

This may seem like an excessively oblique focus for a play about the riots – what about the rioters themselves? The young men who looted and then felt the full force of the law? – but it works. Thanks to the verbatim technique we don't get a dramatised narrative from which we’re supposed to derive a particular moral. Nor do we get a set of events editorialised in order to hammer home the playwright's individual political interpretation. Instead, we get a multitude of voices. Some are insightful, others are prejudiced, all crackle with authenticity. It strikes me that this cacophony of debate which took place in the riots’ aftermath tells us much more about British society than the riots themselves. And that is why Little Revolution is a clever, thought-provoking success.