The future of post-covid drinking, from the mega beer garden to drone deliveries 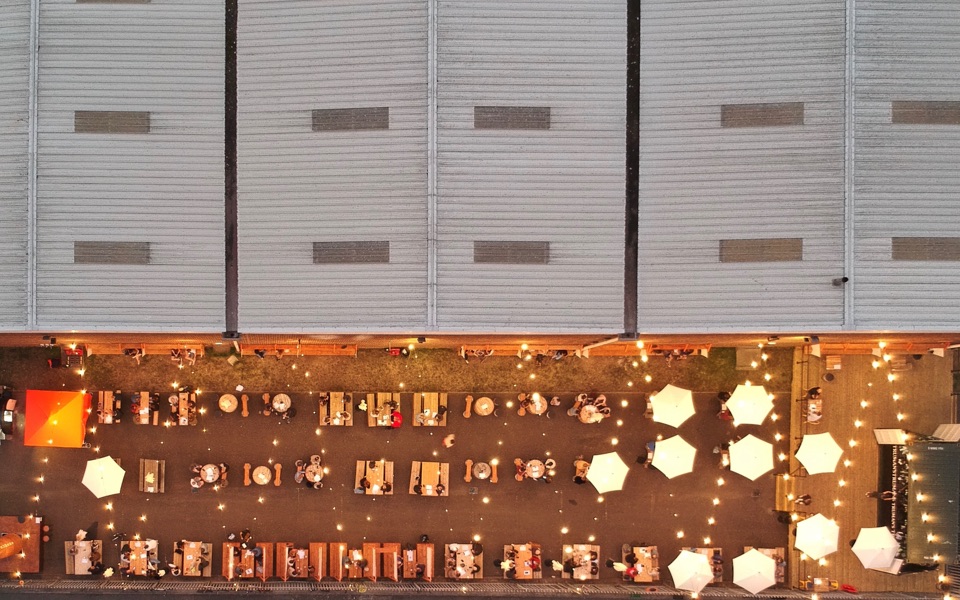 With the baking summer heat threatening to melt my laptop, the idea of al fresco eating and drinking seems like a no-brainer. But Britain, with its unpredictable climate, traffic-clogged streets and plethora of excellent, dingy pubs, has proven resistant to the kind of outdoor cafe culture beloved of our European neighbours.

Until covid, that is. With the rate of transmission many, many times higher in enclosed spaces, restaurants across the country have been desperately converting any outdoor space into social distancing-friendly real estate. My inbox is rammed with emails from restaurateurs boasting about their newly converted beer gardens and roof terraces; indeed, the first restaurant I visited after lockdown, Dalston’s Madame Pigg, has just finished turning an unloved rectangle of concrete into a perfectly pleasant outdoor dining space.

Truman’s Brewery seemed to be particularly prescient when, near the start of lockdown, it announced it was opening London’s biggest socially distanced outdoor drinking space, located in a commercial district near Walthamstow.

With screens dividing some of the tables, heaps of space, food stalls delivering to your table via an app, and drinks arriving in baskets to avoid human contact, Truman’s Social Club, a former carpark, might just be London’s safest drinking den.

The project, it turns out, was borne out of necessity: “The site was meant to be home to our new brewery, says Michael-George Hemus, MD of Truman’s Beer. “When lockdown happened, the funding for the brewery fell through; suddenly we lost 99 per cent of our revenues, the future was very uncertain and we had a huge empty building that needed paying for.

“The question for us was how to overcome these problems and turn them into something positive – the biggest socially distanced pub in the land was the answer.”

The result is somewhere between a beer garden and a food court, with mobile kitchens allowing a rotating roster of street-food vendors. The fact it’s a little rough and ready, with cable-drum tables and wooden benches perched on empty beer barrels, is rather in keeping with the industrial surroundings, the area being made up of corrugated-metal warehouses around which men in high-vis jackets trundle in fork-lift trucks.

“We wanted to create furniture that makes socially distancing feel natural. We don’t want the space to feel empty, but at the same time we don’t want a load of perspex screens separating everyone, so we worked hard with designers and builders to create a safe space with character and atmosphere.”

This was made more difficult by the fact the goalposts had a habit of changing as the project was underway: “We had to start designing the space in a time of great uncertainty with a lot of unknowns,” says Hemus. “When would lockdown end? What will the social distancing guidelines be? How many people will want to go out after lockdown?

“Naturally we had to make some assumptions, not all of which were correct. So, for instance, the government changed the social-distancing guidelines from 2m to 1m, a week days before opening, so we suddenly had to redesign a lot of the furniture.

“The guidelines were vague and interpreted differently by different people – the day we opened, we had a visit from the council and their reading of the rules was different to ours… suddenly we had to stop using some of the furniture and think again. Happily, it all worked out and we even ended up being to fit more people in.”

It certainly seems to be working – the time slots, most of which must be booked in advance, have been sold out most nights, with walk-ins being turned away. The beer garden itself feels lively despite the distance between tables, although the ordering system was experiencing some teething problems when I visited, with two consecutive orders failing to show up.

“The system has been a bit clunky,” admits Hemus. “But we’re improving it to make things slicker. We’ve also had lots of guests say that they love table service and don’t want to go back to queuing. The problem is that it’s more expensive because you need more staff.

“The one thing we miss is the staff-customer interaction you get at the bar. Especially as a brewer, not being able to talk directly about our range of beers and hear what they think is a definite drawback. My guess is that we’ll [eventually] land at a hybrid model with both bar and table service.”

The next step for TSC is to open the indoor space, where the brewery will be located. There are plans to open the first phase of indoor seating later this month, and the brewery itself should start pouring its first pints some time next year.

Also negotiating the intricacies of this brave new world in which we find ourselves is events organiser Indigo & Ivy Events, who plan private events, including catering and drinks.

Neat tricks the company has devised for making events run smoothly while maintaining social distancing rules include creating WhatsApp groups where guests can order drinks without having to get up, and using remote-controlled cars to ferry things between staff or guests.

“As outdoor events become larger, I believe drones could be a really effective way of dropping food and beverages off to clients,” adds co-founder Lyle Copeland. Other less eye-catching techniques include staggering guest arrival times and preparing personalised plates of mixed canapes instead of carrying them through crowded rooms.

“Until we have a vaccine, I can’t see these new practices changing,” says Copeland. “The greater challenge will be putting on something indoors in a smaller area, whilst making sure all government legislation is being adhered to.”

Whether autonomous flying barmen are the future of drinking in post-covid Britain remains to be seen, but you will find few complaints if the trend for outdoor drinking continues apace.