During the 53 weeks to 31 January, Ted Baker's retail sales rose 18.4 per cent to £306.9m, while pre-tax profits jumped to £49.5m – 20.4 per cent higher than in 2013.
This exceeded the British fashion brand's expected profit of £48.6m for the year. Group revenue also went up by 20.4 per cent to £387.6m.
The growth was the result of expansion in all markets, but the company performed particularly well in the US and Canada, where retail sales increased by 24.9 per cent. In the UK and the rest of Europe, there was a slightly lower increase of 16.7 per cent.
Worldwide, e-commerce sales went up by 58.2 per cent to £36.7m during the period.

In January, the company said it performed well over the crucial Christmas period, with retail sales increasing 22.8 per cent over eight weeks to 3 January.
This led to Ted Baker being named as one of the most successful brands in the US by department store giant Nordstrom earlier this month.
But Ted Baker has not only been focusing on its already-established markets – it has also been expanding to new areas such as the Middle Easter. Saudi Arabia and Abu Dhabi are just two of the countries where stores have opened.
It now has 32 UK stores and 30 in the Americas, Europe, the Middle East and Asia, as well as several concessions and licensed stores.
Shares have been steadily increasing in value since last summer, currently at almost double the value they had in August last year. 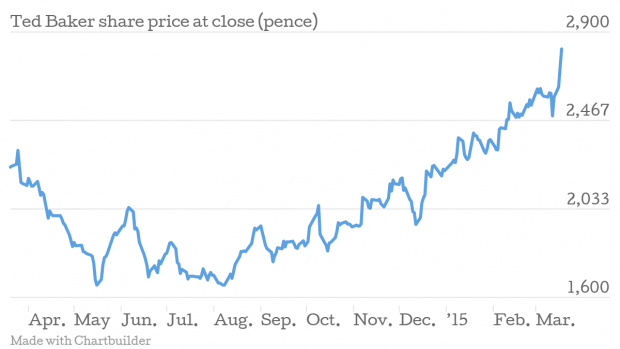 Chief executive Ray Kelvin was positive about the spring and summer ahead:

We continue to invest in the brand as we develop in new markets where we see long term growth. All the while, we remain totally focused on the quality, design and attention to detail which underpins every area of the Group.
Our customers' reaction to our Spring/Summer collections across markets has been very encouraging and we are excited by our new store openings in the coming months, which include a first store devoted to showcasing our extended licence product range in Spitalfields, London.

Ted Baker's plan to grow into new markets is working so far, but it will be interesting to see how it performs in the Middle East over the coming year. The company seems confident that spring and summer will bring good fortune in the near future.