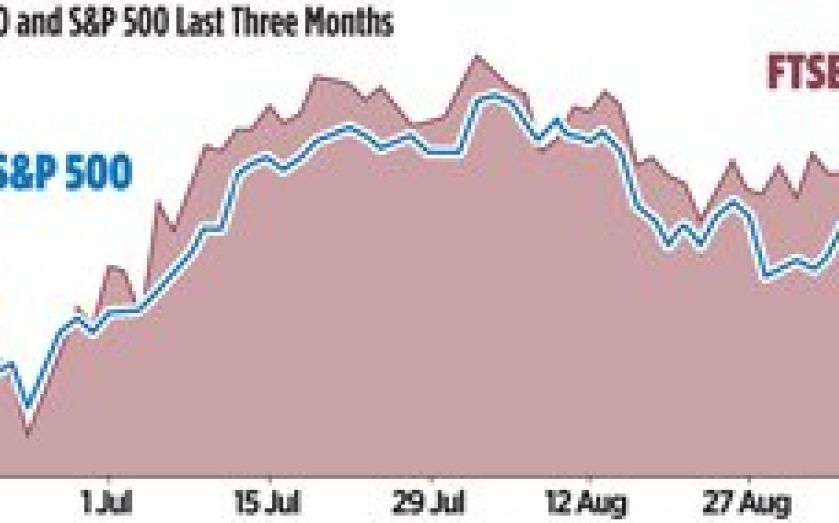 LARRY Summers, former US Treasury secretary, is out of the race to replace Ben Bernanke as Fed chair. In reaction to the news, the MSCI All-Country World Index rose yesterday by 1.1 per cent to its highest level since June 2008, while the FTSE 100 finished 39.06 points higher at 6,622.86, its best close since 2 August. In Europe, the German DAX index rose 1 per cent to reach an all-time high of 8,604, with Asian equities also rallying.

Until recently odds-on favourite for the Fed chairmanship when Bernanke steps down in January, Summers has a reputation for being a proponent of fiscal rather than monetary stimulus. His withdrawal also led to a spike in the price of gold, with the metal yesterday trading up more than $25 from its Friday floor close, reaching a high of $1,336 per troy ounce.

Now the race has crystallised around Janet Yellen, widely viewed as the continuity candidate – and less likely to accelerate the tapering of quantitative easing (QE) or raise interest rates sooner than planned.

Summers’s withdrawal has taken on a special significance, coming just days before the Federal Open Market Committee’s (FOMC) announcement (due tomorrow) on the future of QE3. Most expect it to announce a reduction in the size of its monthly asset-purchasing scheme. Forecasts predict a $10bn to $15bn (£6.27bn) reduction from the current $85bn monthly figure. But what will happen next?

TAPERING: PRICED IN
In a recent note, Julian Jessop of Capital Economics emphasised that “a reduction in the pace of asset purchases would not amount to a tightening of US monetary policy.” Due to the cumulative nature of the asset purchases, stimulus will effectively be expanded as long as QE remains in place. A tapering of $10bn after successive months of $85bn of purchases represents a relatively minor change to policy and, according to Jessop, “is not such a major threat to markets.”

Moreover, many believe that any such reduction is largely priced in already. Equities suffered sharp losses in June as investors adjusted to the idea of tapering (see graph). As Mike Van Dulken of Accendo Markets says, “We’ve been expecting this for some time. The sharp sell-off that accompanied hints at tapering in the past is unlikely to materialise again.”

Ashraf Laidi of City Index thinks the same may be true for emerging market equities. The MSCI Emerging Markets Index fell from around 1,008 at the end of May to just above 883 at the end of June amid fears of a capital outflow due to tapering. But Laidi says that “the emerging market sell-off has stabilised, and tomorrow’s announcement is not expected to trigger a fresh shakedown.” In a recent note, Barclays analysts even initiated a “cautious trade” in some emerging market credit instruments.

But Van Dulken says that, “if the Fed chooses to significantly reduce the amount of MBS it buys (by as much as $10bn or more), this could remove support from the housing market and be perceived as negative for equities.” While unlikely, Van Dulken says that such a move could be seen as exerting a drag on individual’s spending power, and “would be potentially harmful to the real economy.”

YELLEN AND THE DOLLAR
“With immediate tapering broadly priced in, the issue becomes how fast the programme is wound down in the long term,” says Michael Hewson of CMC Markets. Yellen is seen as the continuity candidate, likely to stick to the pace of tapering to be laid out between now and January (when the new chair will take office). “With Summers, on the other hand, there was an awful lot more uncertainty,” Hewson says.

Summers’s withdrawal from the race also led the dollar to weaken considerably against sterling, with dollar-sterling rising to $1.5958 – its highest level since January. Markets appear to expect expansionary monetary policy to remain in place for longer under Yellen than would have been the case with Summers.

Hewson says that further falls are a possibility if Yellen stays the favourite. “I’ll be watching dollar-yen (yesterday steady above the ¥98.60 mark) very closely, especially for any overspill effects on Japan’s economy.” The pair has been extremely volatile in past months (see graph), but a prolonged weakening of the dollar may serve to hurt the Japanese government’s attempts to weaken the currency and boost exports. “If the dollar falls to June’s levels of ¥94,” Hewson says, “this could be damaging to one of the key aims of Japan’s reforms.” Such a fall would likely hit Japanese stocks, he says, setting back the Nikkei 225 index after it has risen from around 13,572 at the beginning of September to over 14,404 at the end of last week.

RACE NOT OVER YET
But Yellen’s nomination is far from a certainty. According to Simon Smith of FxPro, “we can’t rule out someone else coming into the frame, such as former Treasury secretary and New York Fed president Timothy Geithner. Obama may not want to be seen as being railroaded into a compromise candidate.” Meanwhile, Capital Economics’s chief US economist Paul Ashworth pointed out in a recent note that President Obama has already interviewed former Fed vice chair Donald Kohn for the role.

If Obama throws another hat in the ring, the uncertainty is likely to shake markets. “Such a move would enormously add to near term volatility for the dollar,” Smith says. Van Dulken, meanwhile, thinks that “any change to Yellen’s chances of being selected is likely to make equity markets jittery.” Stocks that have been performing well of late, including the cyclical and high-beta stocks (financial institutions such as banks and mining firms) would be likely to feel the effects, he says.

If the situation remains stable, however, and Yellen remains the firm favourite, Van Dulken can see these gains being built on. Goldman Sachs, for instance, has already risen from $152 at the beginning of September to highs of over $165 last week.