Each month, the investment writing team at Schroders highlight the most significant charts to cross their desk.

Elections (not to mention referendums) have been a major source of market uncertainty and volatility in recent times. The latest comes this weekend in arguably the most important election in Europe for 2018, when Italians will be heading for the polls.

The Italian general election result remains too close to call, with as much as a third of the electorate still undecided on their voting intentions.

Investors are keeping a nervous eye on the result, not least because two of the main parties (the Five Star Movement and the Northern League) are sceptical about the euro and have the potential to put its future back in the spotlight.

A great deal of the media coverage of the election build-up has focused on Italy’s immigration debate, but tax is a major issue too, especially among business leaders. As the chart below shows, the World Economic Forum’s Economic Opinion Survey of 2017 has the country’s tax rates as the second most problematic factor for doing business in Italy (narrowly behind the country’s inefficient government bureaucracy).

Most of the main parties are vowing to cut taxes and/or increase spending, potentially ringing alarm bells among investors already wary of the country’s large public debt pile and budget deficit. 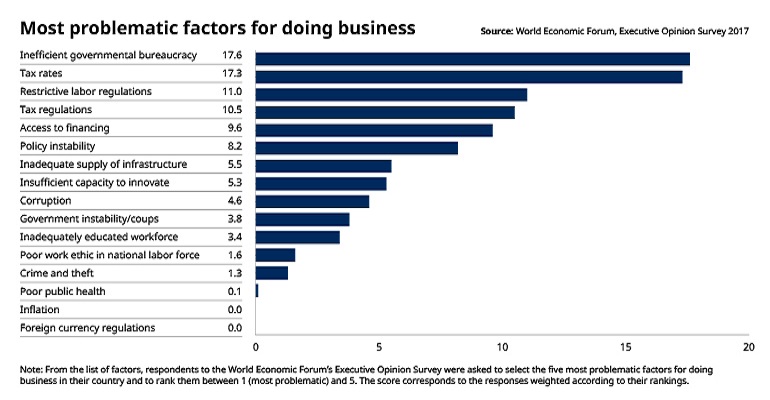 Remaining in Europe, peripheral eurozone government bonds (including Italy), for a long time the pariah of financial markets, are seeing an upturn in fortunes. Peripheral yields have taken support in recent months from a spate of ratings upgrades and improved economic conditions.

Spain was upgraded to A- by Fitch Ratings, while S&P has Spain on BBB+ with a positive outlook. Fitch cited Spain’s broad-based economic recovery and limited impact on the economy from Catalonia’s independence bid. Italy issued 10 and 50-year bonds which were oversubscribed. Both have followed this with further issues in February.

S&P lifted Greek long-term, foreign currency ratings for the first time in two years on improvements in the finances and fiscal outlook, although there has been a recent tick up.

Path of the peripheral yields 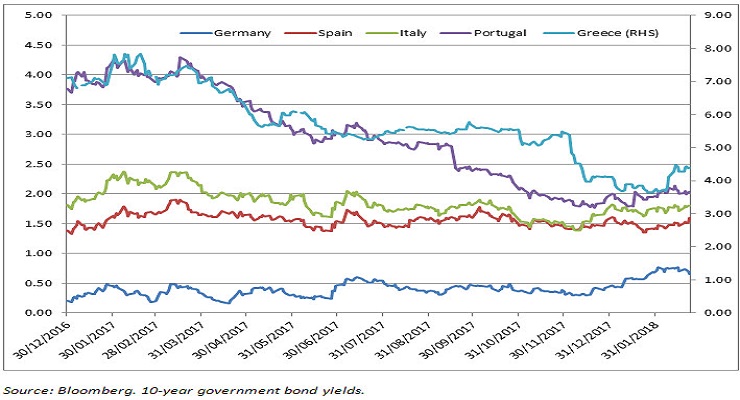 The big Vix spike and the impact on short-volatility ETFs

The growth of exchange-traded funds (ETFs) has been significant over recent years with the products proving popular with individual investors.

Providers have looked to capitalise on this ETF boom with the development of increasingly specialised strategies. One such example is the short (or inverse) volatility ETF. It is constructed using derivatives to profit from declining volatility, as measured by the Vix. The Vix – the Chicago Board Options Exchange Volatility Index – comprises S&P 500 options to track expected equity market volatility levels.

Volatility in 2017 was persistently low (ie stock prices did not fluctuate particularly wildly), so these “short vol” funds performed extremely well, but the events of recent weeks have demonstrated just how swiftly things can unravel.

Markets were turbulent at the beginning of February. This volatility caused the short vol funds to suffer calamitous declines. At the most extreme point, in the first week of February, over a dozen products were suspended from trading.

One such fund was the VelocityShares Daily Inverse VIX Short Term ETN (XIV) shown in the chart below. It reached over $2 billion in assets in late January before falling nearly 95% in early-February and has since been liquidated.

Short vol funds versus the VIX 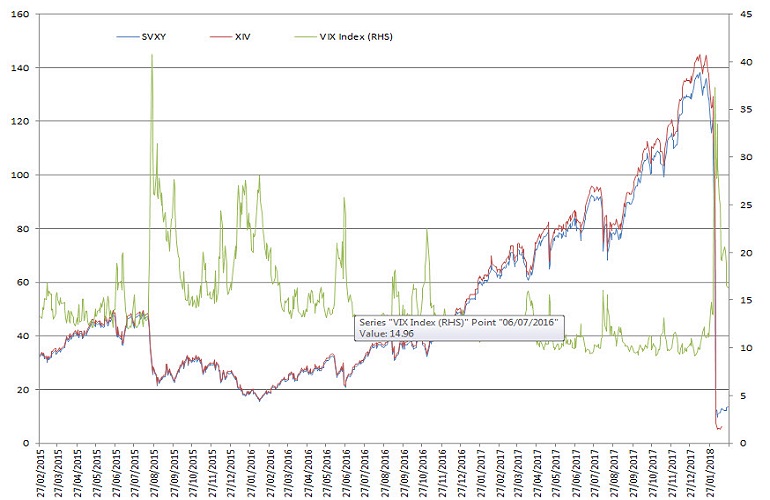 This graph illustrates how the number of companies on the Alternative Investment Market (AIM) has fallen since the 2007/08 financial crisis and average market capitalisations have risen.

In part the chart speaks of the junior market’s growing maturity relative to its earlier days. There are materially fewer very small companies quoted on AIM today than there were a decade ago. The number of companies with market valuations of less than £25 million has more than halved over this period.

Since the financial crisis there has not been a wave of speculative IPOs on AIM to rival those of the 1999/00 dotcom bubble or 2005/06 resources boom. Meanwhile, the secondary market for further fundraisings has held up relatively well. High quality AIM companies have, it appears, been able to raise the equity capital they require to grow. 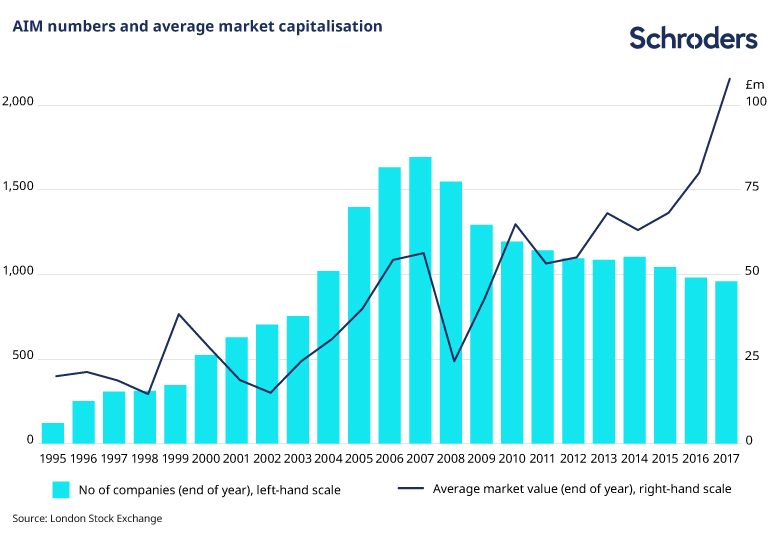 Are start-ups being stifled?

In her recent article “The “Big Tech” backlash: How sustainable are Google, Facebook and Amazon?”, Katherine Davidson looked at why the internet giants are coming under increased scrutiny from society and regulators.

One criticism levelled at the likes of Google is that by snapping up promising start-ups and monopolising the best talent they have been stifling innovation.

Indeed, as the chart below from the Kauffman Index of Startup Activity shows, the number of start-ups declined precipitously from 2006 to 2013, when it reached its lowest point in 20 years. But now the tide seems to have turned.

“Start-up activity, growth, and entrepreneurship have ticked up encouragingly since 2014, suggesting the dip was more a function of the economic environment than structural change,” Katherine said.

Leading economic indicator readings, released in February, have continued to reflect strength and synchronisation in global economic growth. The Global Composite Purchasing Manager’s Index (PMI), a combined activity index of manufacturing and services activity, climbed to 54.6 in January, up from 54.3 in December.

This is the highest level that the index has reached in over three years. Significantly, the measure saw both the advanced and emerging markets economies components increase. 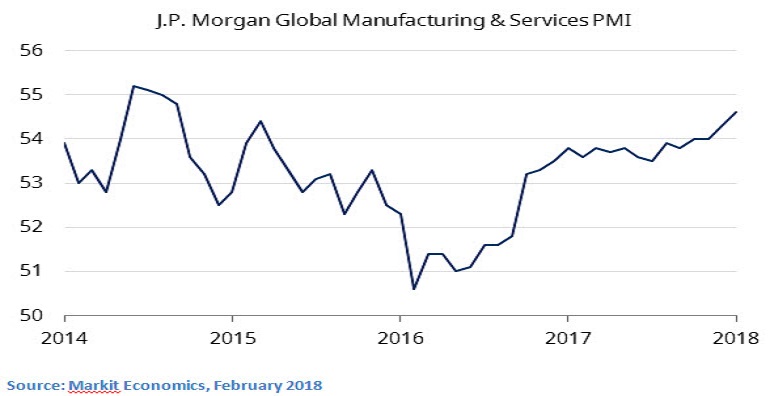 Important Information: The views and opinions contained herein are those of mentioned in the article and may not necessarily represent views expressed or reflected in other Schroders communications, strategies or funds. The sectors and securities shown above are for illustrative purposes only and are not to be considered a recommendation to buy or sell. This communication is marketing material.