Sailing lessons in Croatia: Gaining a qualification with the kids in tow – what could possibly go wrong? Surprisingly little 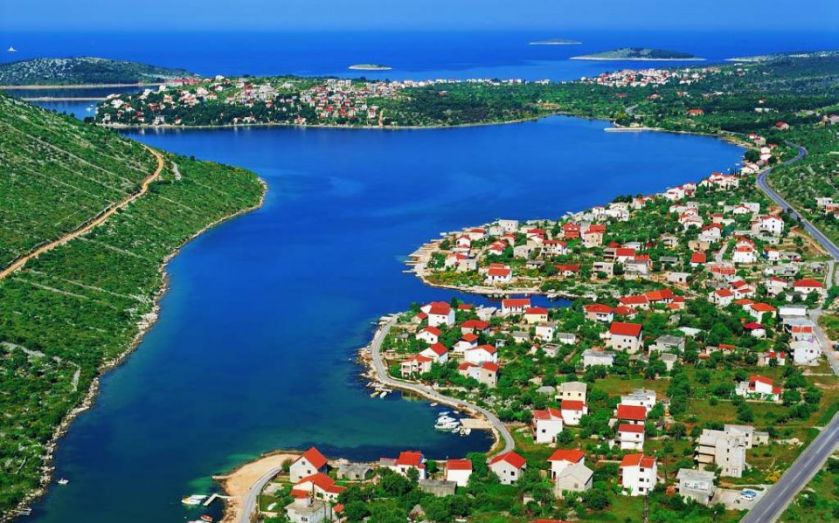 Regardless of your views about EU regulation, surely even Mr. Farage himself wouldn’t think it unreasonable to demand proof of a basic sailing licence before being able to charter a 15 tonne yacht? Until recently it was possible to turn up and hire a £500,000 yacht with your only qualification being a Breton top. No more. From 2015 every charter company will insist on an International Certificate of Competence (ICC) or equivalent before releasing you onto the open seas.
To avoid having to spend weekends in the UK training, Sunsail has just launched a new package called “Sunsail Flotilla Hero” enabling non-sailors to take the ICC course whilst on holiday.

Cruising into a Croatian harbour

And so with nothing more than a few hours of dingy sailing behind me, I persuaded my wife (non sailor) and children aged eight, seven and four (Titanic enthusiasts) to go flotilla sailing in Croatia.
A few weeks before departure, we were sent an online course. Some basic stuff that even our four-year-old knew (bow/stern, front/back) as well as some more complicated elements that worryingly had my wife and I plotting courses over land on our practice charts.
With the online theory course just about navigated, we arrived at Sunsail’s main Croatian base near Split. To say that the kids were excited as they explored the 47ft Jeanneau yacht (reassuringly named “Chilled”) would be an understatement.
Paul Mason, Sunsail’s Chief Instructor, was the poor fellow tasked with teaching us about sheets, painters, kickers, halyards, topping lifts and much more besides.

Croatian villagers lay on a feast

Our first morning briefing was a prime example of why some form of training is required. The weather forecast was for three knots of wind, gusting eight knots. Not even worth putting the sails up for. Thirty minutes in, wind speed hit 30 knots, and if it wasn’t for Paul keeping everyone calm, panic might have set in.
By this time we were properly sailing. Tacking up the coast into a strong wind, pulling on genoa sheets, keeping a bearing 30 degrees to the wind, the kids on lookout duty (for dolphins, icebergs and the occasional other craft). I certainly felt I had earned some Breton stripes as we arrived in Rogoznica.
There are innumerable things that can go wrong sailing but parking is without question the trickiest.
A rudder designed for going forwards not back, lazy lines not to be confused with stern lines, no brakes, an approaching harbour wall, plus an audience on the quayside quietly hoping for drama.  A few hairy moments notwithstanding, we managed not to prang it.

As the week progressed Paul did less and less, but always kept a close watch. In the evenings we learnt knots (irritatingly my 7-year-old proved more proficient than me) and casually reviewed aspects of the course over a glass or two of wine.
On arrival we could not have been more out of place – everyone else exchanging sailing yarns, and there we were, clueless with kids in tow.  But sailing types, nautical stripes aside, seem to be a genuinely lovely bunch, lauding nautical successes, and putting our failures into perspective.
Flotilla sailing makes for an outstanding family holiday. We all had a great time, but, most important of all, came away having done something new. My wife and I are now technically able to charter a yacht anywhere in the world. A thrilling or frightening prospect?

Price from £4,494 for a Sunsail 47 Premier sleeping up to six for a one week sailing holiday at a flotilla in Croatia, including flotilla and skipper fees departing 26  September (flights not included). Curriculum includes the RYA Start Yachting Course, RYA Essential Navigation and Seamanship (ENAS) online course – to be completed prior to departing the UK – and the International Certificate of Competence (ICC) course and examination. Visit sunsail.co.uk.
Share
Tags: NULL